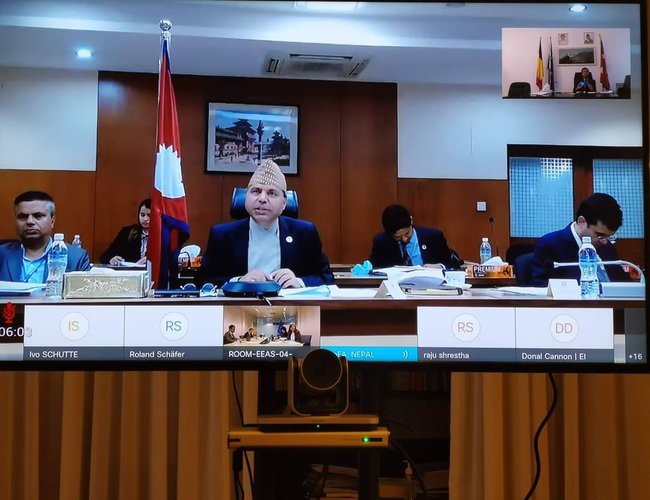 The EU appreciated the achievements made by Nepal and welcomed the implementation of a modern and progressive constitution. It stressed the important role of strong, effective and independent institutions, civil society and the press for democracy and good governance.

The EU welcomed the increasing participation of women in political life and the decision making process in Nepal. The EU also welcomed Nepal’s commitment to transitional justice as outlined in the statement of Prime Minister KP Sharma Oli in the 75th UN General Assembly and by Foreign Minister Pradeep Kumar Gyawali at the UN Human Rights Council in February.

The EU informed about the preparations for the programming and implementation of the new Neighbourhood, Development and International Cooperation Instrument (NDICI) which will be the EU’s main instrument for international cooperation and development assistance as of 2021. 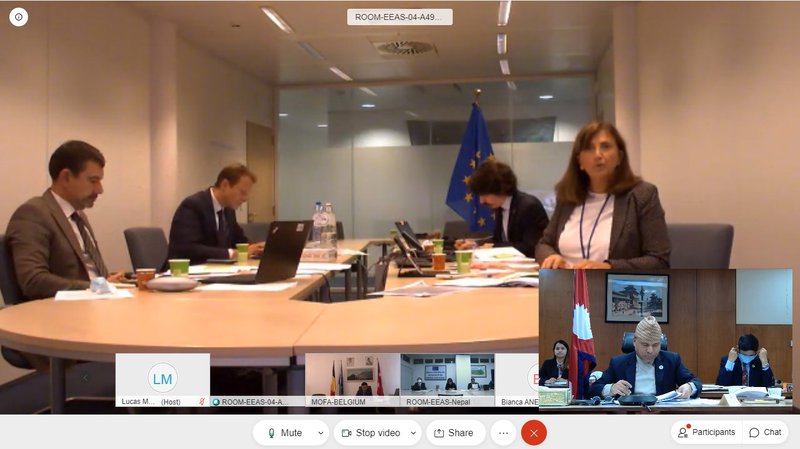 During the 12th meeting of the Joint Commission between Nepal and the European Union (EU) took place on 2 October 2020 via video conference, both sides discussed a wide range of issues of mutual interest were discussed in a cordial, candid and constructive atmosphere.

Co-chaired by Bharat Raj Paudyal, Officiating Secretary of the Ministry of Foreign Affairs (MOFA) of the Government of Nepal and Ms. Paola Pampaloni, Deputy Managing Director for Asia and the Pacific of the European External Affairs Service (EEAS), the meeting focused on the current COVID-19 pandemic and the social and economic impacts in both Nepal and the EU.

The EU prepared in April a €75 million support package for Nepal with the aim to stimulate the economy and labour demand, thereby supporting people’s incomes. Nepal welcomed the EU’s support during the pandemic. Nepal and the EU agreed that the current crisis highlighted the importance of an effective multilateral system and underlined that the World Health Organisation (WHO) is central to our collective efforts to tackle the pandemic. Nepal and the EU agreed on the need to strengthen the global capacity to prevent and respond to future pandemics and on the need for a future vaccine to be a global common good.

Nepal welcomed the EU’s strong support for the G20 Debt Service Suspension Initiative (DDSI) as well as for the extension of the Initiative for another year at the upcoming G20 Finance Ministers and Central Bank Governors/ IMF-World Bank Group Annual Meetings in October. Nepal and the EU agreed that the swift and full implementation of the DDSI by all official bilateral creditors is a key priority in order to ensure predictability given the continuing financing pressures on the beneficiary countries owing to the pandemic.

The Nepali delegation briefed on efforts being made by the Government to contain and fight the global pandemic in Nepal and provided an update on its economic impact. It also updated the EU on the impact on the implementation of the Sustainable Development Goals (SDGs) and underlined its commitment to deliver on those in line with the national aspiration of “Prosperous Nepal, Happy Nepali”. The Government of Nepal also presented its plans for graduation from Least-Developed Country status to a middle-income country.

The EU recalled that in the current COVID-19 pandemic, emergency measures, in Europe and elsewhere, should not be used to limit the democratic space and freedoms.

In the Sub-Commission on Development Cooperation held on 29 September, Nepal and the EU took stock of the progress achieved and lessons learned in the implementation of ongoing cooperation, particularly in rural development, nutrition, education, governance, trade and investment. Nepal and the EU welcomed the recent signature of the Financing Agreements on Nepal’s Multi-sector Nutrition Action Plan (€22 million) and on Provincial and Local Government Support Programme (€33 million); as well as the adoption of the European Commission’s Financing Decision in favour of Supporting Nepal’s School Sector (€20 million) to be implemented through budget support and complementary technical assistance.

As important trading partners, Nepal and the EU exchanged views on their bilateral trade relations. The EU reiterated its long-standing commitment to supporting Nepal’s development also through trade, particularly in the context of the Everything But Arms (EBA) scheme, the EU’s most preferential trade regime providing duty-free and quota-free access to the EU market, as well as via the €8 million Trade and Investment Programme launched in 2019. The Joint Commission participants welcomed the lending activity of the European Investment Bank (EIB) in Nepal, which will focus on climate change mitigation and adaptation, as well as improved connectivity in the coming years.

Regarding people-to-people contacts, Nepal and the EU discussed ongoing higher education cooperation, whereby there has been a growing number of Nepali students studying in European universities. Nepal ranks among the top 20 countries worldwide in terms of students being awarded scholarships for Erasmus Mundus Joint Master Degree programs.

Nepal briefed on its substantial efforts to improve air safety, notably regarding the proposed new aviation legislation, which is currently under consideration of the Federal Parliament of Nepal. The EU acknowledged this positive development while reiterating that further progress needed to be made in the implementation of the legislation. In view of continuing to work together on this issue, the EU announced that it is looking forward to developing a technical assistance project to the Civil Aviation Authority of Nepal in order to support their efforts to enhance the aviation safety oversight in Nepal.

As the current chair of the South Asian Association for Regional Cooperation (SAARC), Nepal briefed about SAARC’s priorities and the activities during the COVID-19 pandemic. Nepali and the EU delegates acknowledged the importance of regional integration.

Nepal and the EU underlined the importance of further strengthening cooperation and collaboration on global and regional issues, notably relating to climate change, human rights, multilateralism and connectivity. They reiterated their commitments to democratic values, the rule of law, good governance and fundamental freedoms, and reiterated their commitment to promoting and protecting human rights. The EU side took good note of Nepal’s candidature for re-election to the Human Rights Council. Nepal and the EU looked forward to the next Universal Periodic Review for Nepal.

Nepal and the EU reiterated their commitment to work jointly in the United Nations, World Trade Organization and other international fora supporting effective multilateralism and rules-based world order, and working towards achieving landmark global goals such as the SDGs and the Paris Agreement. They agreed on the importance of tackling climate change and on making the United Nations Climate Change Conference of the Parties (COP 26) in Glasgow a success. The EU regretted that the Sagarmatha Sambaad, planned to take place in spring 2020, had to be postponed due to the pandemic and confirmed its continued interest in and commitment to the forum with a timely focus on climate change

The Joint Commission meeting, which has taken place annually since 2019, attests to Nepal’s and the EU’s determination to further deepen their partnership. Nepal and the EU look forward to re-starting physical exchanges as soon as the conditions allow.

The next Nepal-EU Joint Commission will take place in Kathmandu in 2021.