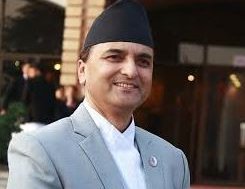 As the government continues construction work and clearance of forest defying Supreme Court’s interim order, senior advocate Prakash Mani Sharma said that he is preparing to file a contempt of court case against Minister of Culture, Tourism and Civil Aviation Yogesh Bhattarai and other persons involved in the construction.

“Since Minister of Culture, Tourism and Civil Aviation Yogesh Bhattarai directing officials to clear the forest defying the court’s order, we are preparing a petition on contempt of court against him and ministry,” senior advocate Sharma told New Spotlight. “At a time when the country has been facing the COVID-19 crisis, officials are taking decision defying the order.”

Although the issue of Nijgadh Airport is under the purview of the Supreme Court with an interim order to stop all the construction-related activities till further decision, minister Bhattarai directing Civil Aviation Authority Nepal and other concerned division to clear the forest defying the order of the court.

After hearing the petition of two cases, the bench ordered to start the hearing of two separate petitions in full bench consisting of five-justice.

Petitioners and environmentalists argue that the forest is highly important in terms of rich in bio-diversity and the endangered wildlife like the Asiatic Elephant and tiger. They demanded an order to scrap the airport construction at the forest area,

Senior advocate Sharma, a renowned public litigation lawyer who filed a number of public litigations to protect and preserve environment and heritage, argued that Nijgadh’s forest is highly important for biodiversity preservation and protection of Asiatic elephants and it is a corridor for the endangered wildlife of Chitwan and Parsa National Park.

In their petition, they demanded a mandamus order to scrap the project and save the forest and habitat of endangered animals. According to them, over 90 million plants need to clear from Nijgadh to construct the airport.

Senior advocate Sharma filed a petition on August 10, 2019, demanding an interim order to scrap the incomplete Environment Impact Assessment Report and mandamus for the protection of trees and the natural habitat of Nijgadh. However, Dr. Dhungel and others filed a petition in December 2019.

In a petition filed by Dhungel and others, a single bench of Supreme Court headed by Tanka Bahadur Moktan issued an interim order and asked both the parties to plead their case on 6 December 2019.

The petitioners knocked on the door of the court after the minister of Culture, Tourism and Civil Aviation Bhattarai announced to start the clearance of forest from the end of December 2019.

Out of the large tropical forest of Gangetic plain, this is the last remaining ecologically valuable forest with thousands of verities of endangered plants, flora and fauna.

At a time when Prime Minister K.P. Sharma Oli has expressed Nepal’s commitment to protecting biodiversity at the international level, Minister of Culture, Tourism and Civil Aviation Bhattarai is doing the opposite of this ordering to clear highly valuable forest in Nijgadh to construct the airport.

Prime Minister Oli has stressed the need to strike a balance between people’s rights over natural resources and sustained efforts in biodiversity conservation. However, Minister Bhattarai termed the Airport as an inevitable project.

The Prime Minister said that Nepal accorded high priority to biodiversity conservation. Living in harmony with nature is a part of Nepali Culture.

As prime minister shared the major achievements and success stories of Nepal in biodiversity conservation and underscored the need to harmonize the efforts under multilateral agreements and internationally agreed on development frameworks.

“Twenty-three percent of our geography has been designated as protected area and we have achieved Aichi Target – 11. We have a plan to expand it to 30 percent by 2030”, the PM added.

As Prime Minister Oli is claiming the conservation, the Ministry of Environment and Forest has already issued permission to cut million of trees in Nijgadh areas.

With the direction of the Ministry of Culture, Tourism and Civil Aviation Bhattarai, habitat areas of endangered Asiatic elephant and tiger have already cleared defying the order of the court.

“Nepal's progress in landscape-level conservation and transboundary cooperation on migratory species are considered as a success,” said PM Oli. He said, adding so is the engagement of communities to managing human-wildlife conflict.

Through a strong law enforcement system and enhanced cooperation at the international level, we have achieved zero-poaching of rhino for almost a decade, PM Oli shared on the occasion. “We have almost doubled the number of tigers well ahead of the target year of 2022”.

With the destruction of a large portion of the forest of Nijgadh, the corridor of the tiger population of Parsa National Park and Chitwan National Park to move to other areas will come to an end.

Following the construction of the airport, these two national parks will further suffer due to noise created by aircraft during landing and takeoff.

As the Prime Minister Oli expressed Nepal’s commitment to the preservation of biodiversity at the summit held virtually under the theme of ‘Urgent Action on Biodiversity for Sustainable Development’, featured with a total of 144 speakers including 67 Heads of State/Government and 68 Ministers, Minister for Culture, Tourism and Civil Aviation Bhattarai has said that much-awaited Nijgadh International Airport was an unavoidable project of the country as it was linked with the nation’s interest and development.

At a meeting of the International Relations Committee under the House of Representatives held at Singha Durbar on Sunday, Minister Bhattarai expressed his commitment that construction activities of the airport would be accelerated by keeping the unsolved issues aside.

Briefing the Committee members about the current situation and impact of COVID-19 on civil aviation, he expressed the belief that the Nijgadh International Airport project would be advanced with collaboration and cooperation of all concerned.

“Trees at 1,900 hectares of areas should be cut down for airport construction and activities are underway to count the trees,” said Minister Bhattarai.

Most of the lawmakers drew the attention of the bodies concerned including the Tourism Ministry and CAAN towards the delay in the construction of Nijgadh Airport.

Germany Decides To Continue With The Bilateral Development Cooperation With Nepal Beyond 2023 By NEW SPOTLIGHT ONLINE 1 hour, 9 minutes ago

Nepal Backs Away From US State Partnership Program: Indian Scholar, China Commends Nepal's Decision Not To Move Ahead On The SPP: CGTN By NEW SPOTLIGHT ONLINE 1 day, 23 hours ago