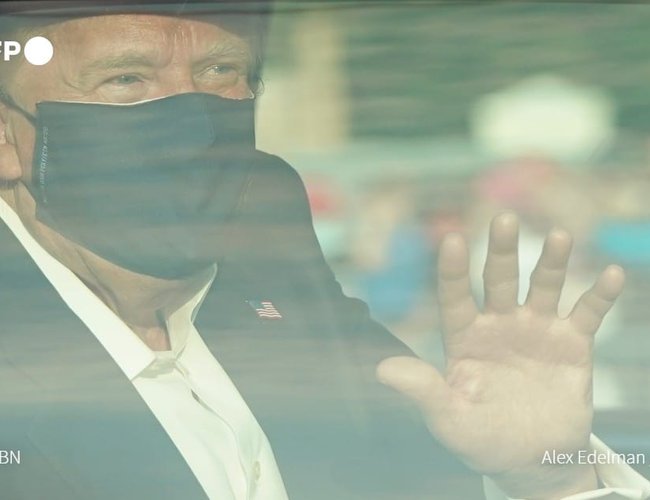 US President Donald Trump has surprised supporters gathered outside the hospital where he is being treated with Covid-19 by riding past in a motorcade.

Wearing a mask, the president waved inside a car moments after tweeting that he would pay a "surprise visit".

Mr Trump, who has been criticised for his handling of the pandemic, also said he had learned a lot about the virus.

Earlier, his doctors said Mr Trump continued to improve and might be discharged as early as Monday.

Dr Sean Conley said the president's oxygen level dropped twice since his diagnosis, and he was started on a steroid called dexamethasone.

The president was given extra oxygen at least once after testing positive, said Dr Conley, who also sought to clarify earlier confusion caused by conflicting statements about Mr Trump's condition.

In a tweet, the president - dressed in a suit jacket and shirt with no tie - said: "I learned a lot about Covid. I learned it by really going to school. This is the real school. This isn't the let's read the books school. I get it and I understand it. It's a very interesting thing, I'll be letting you know about it."

The president's diagnosis, which he made public in a tweet early on Friday, has upended his election campaign. Mr Trump faces Democratic challenger Joe Biden on 3 November.

What did the doctors say?

The president had a high fever, he said, and an oxygen level below 94% - a healthy person's level is 95% or higher.

The president was given supplemental oxygen "for about an hour", the doctor said, and was flown to Walter Reed in the evening. The news had already been widely reported in US media, and Dr Conley's confirmation came after he refused to answer several questions about the issue during Saturday's briefing.

The second episode happened on Saturday, when the level dropped below 93%. When questioned, Dr Conley did not say whether the president had received oxygen but added that, if it had happened, "it was very limited".

The team, Dr Conley said, decided to give Mr Trump dexamethasone, which is shown in studies to improve survival for patients in hospital with severe Covid-19.

Steroids calm down inflammation and the immune system and are already used in conditions like arthritis and asthma as well as in some severe infections. The drugs are not thought to be helpful in the early stages of a coronavirus infection.

"Given the timeline where [Mr Trump] is in the course of illness, we're trying to maximise everything that we can do for him… We decided that in this case the potential benefits early on in the course probably outweighed any risks at this time," Dr Conley said.

Dr Conley also addressed a conflicting account about the president's health given shortly after his briefing on Saturday by the White House chief of staff. Mark Meadows said Mr Trump's vital signs over the previous 24 hours had been "very concerning" and that the next 48 hours would be critical.

"I think his statement was misconstrued," the doctor said.

However, he acknowledged giving an overly upbeat description of Mr Trump's condition a day earlier: "I didn't want to give any information that might steer the course of illness in another direction. And in doing so, you know, it came off that we were trying to hide something, which wasn't necessarily true."

The president, being 74, a man and someone categorised as obese, is in a higher-risk category for Covid-19. On Friday he was given an experimental drug cocktail injection and started a five-day course of antiviral medication remdesivir.

Dr Brian Garibaldi, who is also part of the team treating the president, said: "He feels well, he's been up and around and our plan for today is to have him to eat and drink, be up out of bed as much as possible to be mobile."

The doctors said the president had not had a fever since Friday and that his liver and kidney functions had remained normal. But Dr Conley refused to answer questions on whether lung scans showed any damage.