China On The Agenda For QUAD Talks In Tokyo

China On The Agenda For QUAD Talks In Tokyo 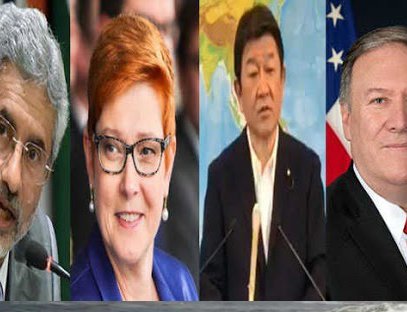 US Secretary of State Mike Pompeo has arrived in Tokyo to attend a foreign ministerial meeting taking place on Tuesday with Japan, Australia and India reports NHK.

Pompeo landed at a US military base in suburban Tokyo early Tuesday morning.

Upon arrival, he tweeted that he was looking forward to meetings with Japanese Prime Minister Suga Yoshihide and foreign ministers from three countries.

The four-nation gathering, known as Quad talks, is expected to focus on how to realize a "free and open Indo-Pacific region."

The ministers are also expected to exchange views on China, which is increasing its activities in the East and South China Seas as well as in cyberspace and outer space.

Pompeo is expected to reaffirm cooperation between the four countries at a time when US-China ties have chilled. Before heading to Japan, he expressed hope of leaving with "some significant achievement" in the talks.

Pompeo is also expected to brief Suga and other foreign ministers on the health condition of President Donald Trump who has been infected with the coronavirus.

Pompeo was originally scheduled to visit Mongolia and South Korea after Japan. But he decided to visit only Japan after Trump was admitted to hospital for COVID-19 treatment.

Russian Forces Claims Mariupol Steel Plant is Under Their Control By Agencies 2 days, 14 hours ago