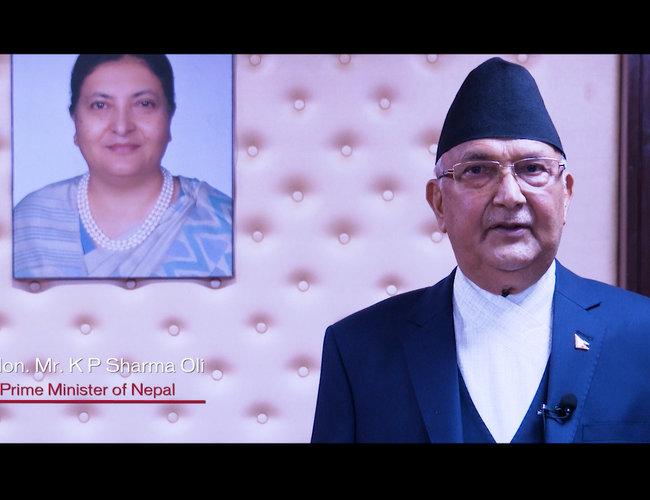 Prime Minister K P Sharma Oli addressed the Climate Vulnerable Forum Leaders Event held virtually today.In his statement, Prime Minister underlined the existential threats posed by climate change such as rising temperature, rising sea levels, and melting of glaciers which have impacted the lives and livelihoods from the high Himalayas to the lowlands.

The Prime Minister further highlighted the importance of Nepal's snow-fed rivers that nourish the basins and clean the ocean ecosystems, serving as natural climate stabilizer and signifying the organic linkages between mountains and the oceans.

While appreciating the vision set by the Climate Vulnerable Forum (CVF) in limiting the rise of global temperature to 1.5oC and its good track record in leading the long term sustainable solution to climate change, the Prime Minister also stressed the need for full and effective implementation of the Paris agreement and making climate issues top global political agenda during the COP26 next year.

The Event, organized in conjunction with the 75th Session of the United Nations General Assembly 2020, was hosted by the Government of Bangladesh as the Chair of the CVF.

I begin by congratulating Bangladesh for assuming the Chairmanship of the Climate Vulnerable Forum (CVF) and coordinating this important event.

Climate change today poses an existential threat. The best available science tells us that with rising temperature, rising sea levels, and melting glaciers, humanity is on the wrong side of the race against nature.

Retreat of the glacial ice due to global warming has negatively impacted the lives and livelihoods of the Himalayan and high mountain civilization, induced disasters in the lowlands and caused rise of the ocean levels.

Nepal’s snow-fed rivers nourish the basins and ultimately help cleaning of the ocean ecosystems. They serve as natural climate stabilizer signifying the organic linkage between mountains and the oceans.

It is ironic that the climate vulnerable countries like ours have borne the brunt of inaction of others.

The impacts of climate change do not respect political boundaries. Therefore, the vision set by the CVF for increased commitment by all nations to limit the rise of global temperature to 1.5°C is now more important than ever.

The inception of ‘Survival Deadline’ today highlights the urgency of climate action.

The large emitters should break their silence and scale up climate ambitions to send a strong signal.

This is a time to walk the talk.

It is a time to inspire others by example with full and effective implementation of the Paris Agreement.

For us, every year counts and reducing every fraction of a degree in temperature matters.

It is a question of survival for the vulnerable countries.

CVF has always been on a frontline with good track record to lead the long term sustainable solution to climate change. It is important to keep the climate issues at the top of global political agenda as we prepare for COP 26 next year.

Nepal remains committed to communicate enhanced Nationally Determined Contribution (NDC) by the end of this year.

Climate action for the vulnerable countries like us rests in access to climate financing, affordable technology, and implementable adaptation and mitigation programs.

The COVID-19 crisis has devastated human lives and economies.

But, the pandemic can be an opportunity for a greener and more sustainable health and economies. The lesson learnt can be useful to tackle climate change with the similar sense of urgency and priority at national, regional and international levels.

The need is to tread on the right path.

The need is to unite for climate actions, not to pitch politics against climate change.

The need is to have a common plan- the plan of sustainable solutions.

There is no time to lose.

Action must start now, as this is a question of our survival.

Nepal Army Collects Over 30,000 KG Of Wastes From Major Mountains By Agencies 21 hours, 52 minutes ago