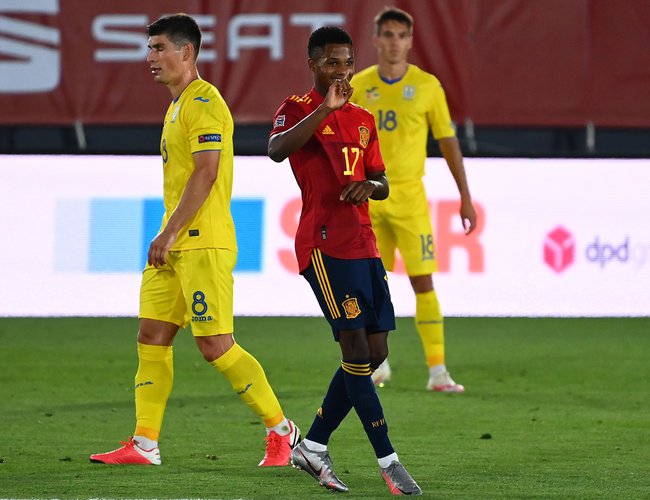 'It was difficult for everyone' - Luis Enrique defends Ansu Fati after Spain winger struggles against Switzerland. The 17-year-old endured a tough game in the 1-0 victory on Sunday but his manager did not think it was a wholly new experience for the teen Link Goal

Spain boss Luis Enrique has defended Ansu Fati after he struggled to impact the 1-0 victory over Switzerland in the Nations League.

The 17-year-old Barcelona winger, who is his country's youngest ever goal scorer, played 57 minutes in Madrid before being replaced by Wolves star Adama Traore.

Fati failed to capitalise on two good openings in the match, managing just one shot and creating zero opportunities for team-mates.

He also failed to muster a cross and lost four of his seven duels as Switzerland's 3-5-2 system proved tricky to break down, with Silvan Widmer and Nico Elvedi providing tough opposition down the Spain left.

"Man-marking is always a problem for the forwards, for everyone," Luis Enrique said on Monday as Spain prepare to face Ukraine. "Our goal is to create the greatest number of advantages for our attackers. After that, each game is how it is.

"Ansu is 17 years old, but he already knows what he's going to find in matches.

"We have our model because it depends on the work of the whole team. Against Switzerland, it was a difficult game for everyone because of the strong and high pressing from them, but I think we solved things well."

Spain's attack was also frustrated in a 0-0 draw with Portugal last week, but defensively the 2010 world champions have looked impressive. In a 15-game unbeaten run stretching back to November 2018, La Roja have conceded only six goals and kept nine clean sheets.

Luis Enrique is happy to see the likes of Pau Torres, Eric Garcia and Diego Llorente perform well in a battle for a starting spot and believes the younger players can help captain Sergio Ramos improve.

"Pau, Eric and Diego have done well, each one contributing in their place and trying to improve," he said. "They are able to play with someone who is a benchmark, like Ramos, and they feel they can play with him, help him and even correct him. Leaders also know they can learn new things."

Spain's final game of this international break, away against Ukraine on Wednesday, could be played in front of up to 15,000 spectators as part of a trial to reintriduce fans to games amid the coronavirus pandemic, and Enrique is excited by the prospect.

He said: “Playing in front of 15,000 spectators is an optimistic sign for everyone. It's better for the local team, but playing with the public is a joy”.