Despite facing major disasters, including earthquake, blockade, landslide and the ongoing COVID-19 global pandemic, 456 MW Upper Tamakosi, Nepal’s largest hydropower project, is making progress step by step. For all these troubled years, Chief Executive Officer (CEO) Bigyan Prasad Shrestha has been working quietly in the project in various capacities leading professional and competent teams of technicians and other staff. President Bidhya Devi Bhandari has recognized the progress of the project by conferring Shrestha with the Prawal Janasewashree (Third) medal 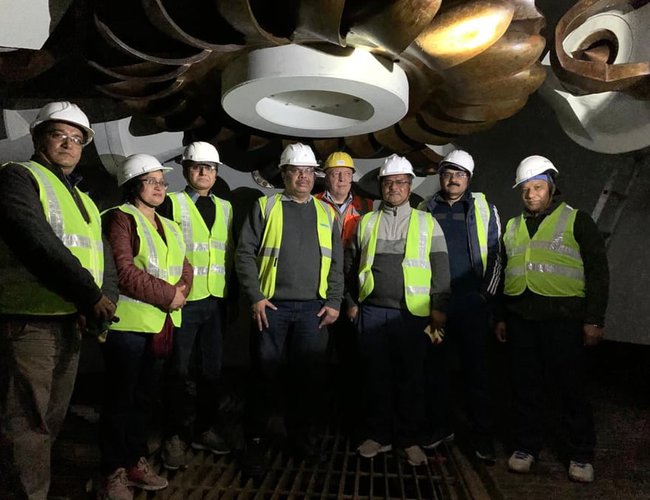 Although he has been working in the Upper Tamakosi project in different capacities over the last 15 years, CEO Shrestha prefers to work quietly and without any public hype. Despite his individual character to work in a low profile, the progress made by the project is an open secret. The announcement of Prawal Janasewashree (third) by President to Shrestha as the CEO of Upper Tamakosi is a recognition and reward worth it for the entire team of Upper Tamakosi.

On Constitution Day, Shrestha’s name came up in the President’s list of national medal recipients. The President will confer with Shrestha Prawal Janasewashree (Third) on coming Baisakh 1, 2078. 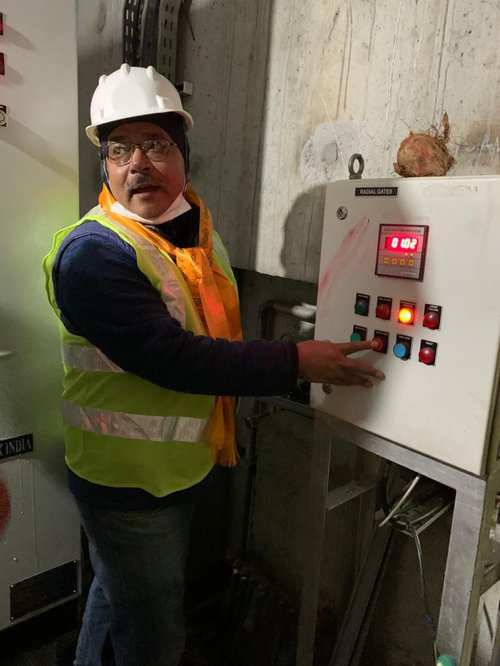 “This medal is recognition of the endeavor made by all staff working in the project with dedication and commitment tirelessly to complete it in time,” said CEO Shrestha. “All the progress is made through the team spirit of our competent technical and managerial staff and I am just part of it.”

CEO Shrestha’s involvement in the project started from its conceiving period. He walked to the project site in the most difficult trekking terrain. He was part of the team to start the initial study. However, since 2064, Shrestha has worked in Upper Tamakosi as its manager (electrical), project chief and CEO since 2017.

Shrestha worked as deputy project chief under Mrigendra Bahadur Shrestha, the first project chief who has immensely contributed to implementing the project. “As a project chief, Mrigendra Bahadur Shrestha took a lot of initiatives to make the project possible. What we have been doing now is following his path and idea. Although he retired from NEA a few years back as Project Chief, Shrestha will be always remembered as a pioneer to push Nepal’s largest hydropower project.”

Having learned a lot from the earthquake and blockade, the Tamakosi team under the guidance of Shrestha continues to maintain the pace of work even in a naturally hostile situation in the ongoing pandemic of COVID-19.

The 456 MW Upper Tamakosi Project has made a major breakthrough installing a 373 meter lower shaft, the project is maintaining the pace to complete it within 2020 during the lockdown. Shrestha also appreciates the roles of the past MD of NEA, Kulman Ghising, who chaired the Company for four consecutive years.

With a skillful team of technical and managerial staff, the Upper Tamakosi project is now pushing the contractor of lot 2 Hydro-mechanical Works Texmaco Rail & Engineering Ltd. India to complete its remaining work by bringing the much-needed equipment from its factory. 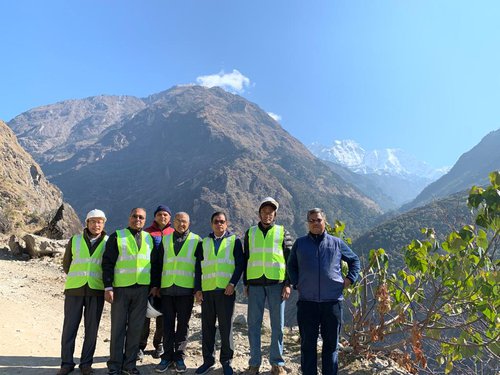 Although construction of the 456-MW Upper Tamakosi project has so far witnessed over 99.5 percent progress in terms of physical development, it is still in limbo due to the delay in manufacturing, transporting and installing some key equipment by the contractor of Lot 2.

Giving special priority to the energy sector, even all officials including the prime minister, Minister for Energy, Water Resources and Irrigation Barsha Man Pun have had a high hope that given the current progress the project will be completed in the upcoming fiscal year.

Management of the Upper Tamakosi Hydropower Ltd also has not been sparing any chance to work to complete the project. Following the announcement of lockdown on April 4, there was a rush for labor to go home all over Nepal. Analyzing the huge financial cost of obstruction in case of suspending the work during the lockdown, Tamakosi Hydropower Ltd decided to take a risk, making arrangements to retain the laborers to continue the work.

“Upper Tamakosi, I felt sometimes, is the best project starting its construction at the wrong time. From design change to Great Earthquake, the project has gone through several painful situations, from time to time, including design change, the Great Earthquake and the bad performance of one of the contractors and now the coronavirus pandemic. Looking at such a situation, I have a feeling in my mind whether this project would have started a long time back completing before these painful situations or it would have started a bit later. When we talk about generating electricity in 2/3 month’s period, it gives me hope and pleasure and satisfaction. With some existing critical problems, there is a likely delay in the generation of electricity. This uncertainty hurts my heart,” writes Bimal Gurung, Deputy Manager (Civil) Head of Monitoring and Evaluation Division of the project, who has been in the team for a long time.

As in the initial period of the COVID-19 Pandemic, the local people and local bodies opposed the move of the project to retain the workers and start the work. The project made several efforts to convince them that adequate safety measures would avert problems but often they come to obstruct the work.

Although it involved risks, the decision to continue construction work keeping the workers safely inside the project has paid as the project was able to install the most challenging 373 m high Lower Penstock Shaft in the project.

With his team, CEO Shrestha has worked tirelessly to achieve the project’s target. But, the project has been facing some unavoidable technical issues. Despite several efforts, the project is unable to bring expert technicians to monitor the final work in the tunnel. Similarly, the contractor of lot 2 is yet to manufacture and transport some key components of the project.

Although the project has recovered from the trauma of the earthquake and devastation of the road by the landslides, it is still uncertain whether the project would complete as per the new schedule given the existence of above mentioned critical issues. However, CEO Shrestha and his entire team’s dedication and backing from NEA and line ministry have been making everything possible to bring the project in the time.

Coordinating with all different stakeholders including the use of Nepal’s Consulate General Office in Kolkata, the project is trying to transport critical equipment from the factory of Lot-2 Indian contractor so that the project can complete in time.

The recent achievement is the result of all-out efforts made by the project management even during the lockdown. With support from all, finishing work in the tunnel, transmission line construction and other works continued in the 456 MW Upper Tamakosi Project.

“Despite obstructions caused by the Pandemic and the local community, the work is going on in the project,” said Dr. Ganesh Neupane, spokesperson of the project. Major challenging work has already completed but some very critical work continues,” said Dr. Neupane.

Facing frequent opposition and threat from the local population, Chinese, Italian, Indian and Nepali personnel are working there. They have been working there since even before the coronavirus outbreak in the country.

Dr. Neupane said that all possible safety and caution had been applied to save the workers from infection. Civil works are performed by Chinese Sino Hydro, electro-mechanical work is being done by Andritz, hydro-mechanical by Texmaco Railway Engineering and substation and transmission lines by Indian company KEC International.

KEC has already completed 220 kVA Double Circuit, 47.0 km (Gongar to Khimti Substation) Transmission line and the work of substation is at the final stage. 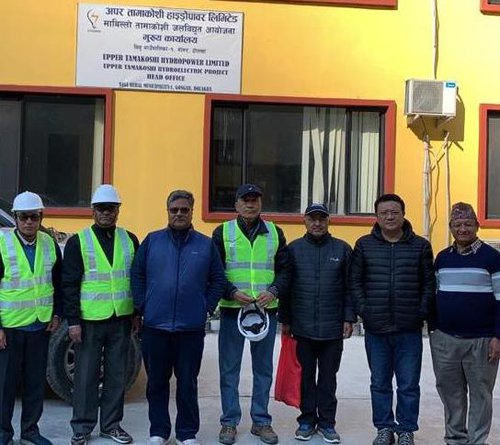 With the successful testing of headworks, Upper Tamakoshi has completed 99.5 percent work in the project. After completing concrete lining and grouting works in the tunnel, chemical grouting is underway at some locations.

The civil work in 220 kV substations in New Khimti Substation at Phulashi is in the final stage and the installation of equipment in the substation is underway.

The necessary testing of its dam, head work and semi-reservoir, the project has proved the progress in civil works.

CEO Shrestha said that the chemical grouting and concreting in Adit Tunnel gates are in the final stage.

With the capacity to generate 2,281 GWh of energy annually, Upper Tamakosi will be a major game-changer in the power sector. After the completion of the Chilime Project, this is the second project constructed by the NEA subsidiary with Nepali investment and Nepali project management.

“Main challenge is to get or deliver all outstanding key equipment from Kolkata-based Factory of Texmaco and its Erection. Pressure test and wet test of a high head project like this one is technically challenging in order to avoid any small mistakes which may convert to big casualty. said, CEO Shrestha.

Similarly, the visa-related issue for foreign works and labor permission is also affecting the project. Particularly, the new provisions in the act are creating problems to bring foreign experts for temporary periods.

Due to the delay in releasing the loan for the project by Nepal Government and national banks, there are difficulties for the payment to consultants and contractors as per the monthly bill.

Due to the threat of COVID-19, local people entered the project sites and threatened the employees disrupting the work for weeks. Local people even forbade employees from visiting the sites. There is a problem in transporting cement, iron rod and chemicals. Despite completing cement grouting in the main tunnel, the work of chemical grouting is yet to be completed due to the failure to bring 2 foreign experts as the international flight is yet to start. 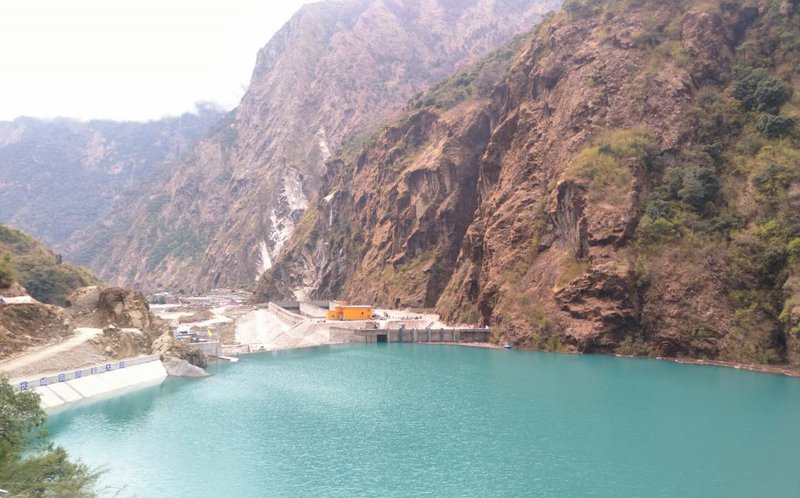 Due to various obstructions, employees of the project, engineers and technical staff of consultants are facing difficulties in the movement from Kathmandu to the project site.

Despite facing several major natural hurdles and difficulties during the construction period, 456 MW Upper Tamakosi, Nepal’s largest hydropower project, is close to completion. If things go at the current pace, the project will start the generation of hydropower by the end of 2020.

Excited To Be In Beautiful Nepal: Under Secretary Uzra Zeya By NEW SPOTLIGHT ONLINE 20 hours, 22 minutes ago

Korean INGO UHGHF To Buil A School In Dailekh By Agencies 1 day, 21 hours ago