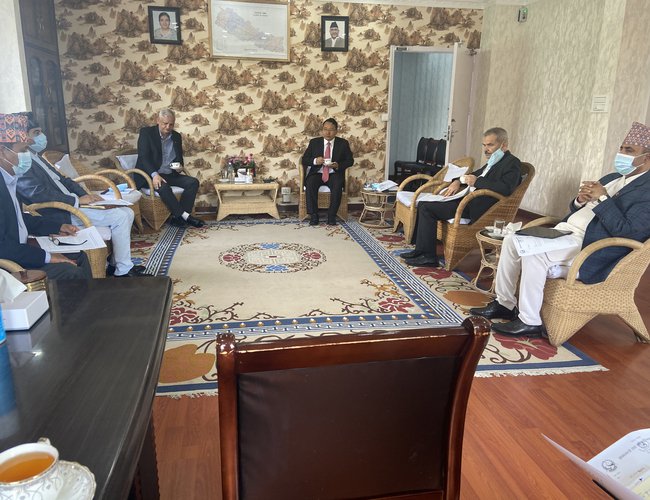 “At a time when the fifty-percent of the share of Khmti comes to NEA and 456 MW Upper Tamakosi will generate the electricity from coming winter, the government is in a position to trim down the tariff in the coming year,” said Minister Ananta.

Addressing a meeting of the working committee formed by the cabinet to come recommendation for the policy change in the energy sector, minister Pun aid that the per-unit average cost of electricity generated by Upper Tamakosi will be around Rs.4. With this cheap energy, NEA will be in a position to deduct the tariff.

He also said that the government is working to achieve the target set under the Energy Decade to produce 10-15 thousand MW of electricity. He said that it will be easily achievable.

The four-member committee will present a report to the cabinet following a study of existing energy policies, regulations laws and prepare a new reports based on the study.

Secretary of energy Dinesh Kumar Ghimire said that the ministry has been giving priority to infrastructures like transmission lines along with generation. He said that India is a highly potential market for Neal’s hydropower and Nepal has to take advantage out of this. Secretary Ghimire said that India is interested to import clean energy from Nepal, Bangladesh and Bhutan to avoid electrify generated by diesel power plants. The meeting also constituted a technical committee to prepare a technical draft under the coordinator of Joint Secretary Prabin Aryal.

The members of the committee include joint secretaries from Finance, Industry, Commerce and Supply, Forest and Environment, National Planning Commission, Energy Commission Secretariat, Director General of the Department of Electricity Development and a representative of Nepal Electricity Authority.

New Technology In e-cooking And Biogas Can Be Supplied To Nepal: ATEC CEO Ben Jeffreys By NEW SPOTLIGHT ONLINE 1 day, 22 hours ago

Replacing The LPG By Electricity Is The Priority Of The Government: Minister Karki By NEW SPOTLIGHT ONLINE 3 days, 11 hours ago

Nepal Imported LPG Worth Of Rs.52 Billion In The Last Ten Months By NEW SPOTLIGHT ONLINE 3 days, 23 hours ago