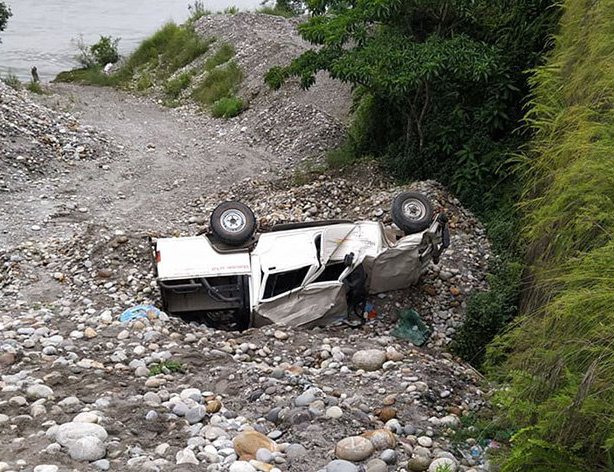 Five people including two from Okhaldhunga were killed in a road accident that took place at Bhadaure Bhir, located on the border between Okhaldhunga and Udayapur districts early this morning reports RSS.

According to RSS, five passengers died on the spot. Two passengers have been identified as Ram Bahadur Sarki,45, and Karme Sarki,26, of Madhavpur in Manebhanjyang rural municipality-9, Okhaldhunga, according to Deputy Superintendent of Police of Udayapur Bed Prasad Gautam.

The identity of two men and one woman is not yet known.

Kumari Sarki,28, Kalpana Sarki,22, of the Manebhanjyang rural municipality-9, and the jeep driver Panav Khadka,28, of Trigamba municipality-4, Rupandehi have been seriously injured.

Preliminary police investigation says that the jeep fell off the road after suffering a brake failure.

Baitadi Tipper Accident: Seven Killed And Several Other Injured By Agencies 3 months ago

Chinese National Arrested With 4.8 Kg Gold At TIA By Agencies 3 months, 1 week ago