Interaction between the two armies has continued despite the souring of relations at the political and diplomatic levels. 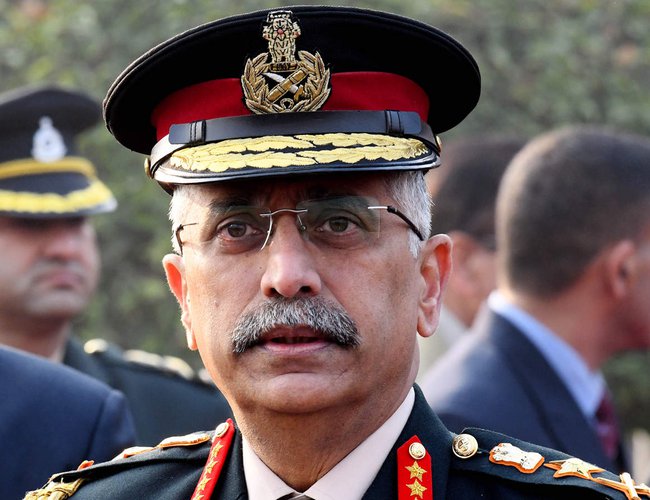 A recent Nepali Army press release disclosed the news of the Indian Army Chief Manoj Mukund Naravane’s Nepal visit next month. As reported in the media, General Naravane “will be visiting Nepal in November, and the two militaries are in touch to finalize exact dates”. Given the current state of Nepal India relations and lack of Indian response to Nepal’s request for diplomatic negotiations to resolve the border problem, news of this visit has generated wide interest.

Welcome News: Nepal and India, historically two close and friendly neighbors, have been experiencing strained relations for some time. After the latest dispute about the Kalapani border area, Nepal has made unsuccessful attempts to re-set friendly ties through diplomatic negotiations. With continuing deadlock at the political and diplomatic levels, the announcement of this highest level Indian visit since the latest rift is a piece of welcome news. This visit can open the door for diplomatic negotiations.

Nepal India Relations - Deep Rooted and Widespread: Nepal India relations are so deep-rooted and widespread that they encompass all aspects of state to state and people to people interactions. Surrounded by India on three sides, over 65 percent of Nepal’s external trade is with India and so far, most third-country trade pass through India. A large number of Nepal is and Indians cross the international border daily for education, trade and economic activities and employment. An open border is the best manifestation of close Nepal-India relations from socio-economic, cultural to daily livelihoods.

Cooperation between Nepali and Indian Armies: Deep-rooted and wide-ranging friendship between two sovereign nations presupposes security cooperation. In this spirit, the Nepali and Indian armies have always maintained close and cooperative relations. Nepal gets most hardware for its security forces from India.

Interaction between the two armies has continued despite the souring of relations at the political and diplomatic levels. Consignments of vehicles and equipment agreed during the Bilateral Consultative Group meeting continued to arrive in Nepal uninterrupted. NA received 100 vehicles, 10 ventilators and medicines during this period. Many NA officers continue to undergo training in Indian Army institutions. India also sends officers for courses at the NA Command and Staff College, all reflecting the continued strong bond between the two armies.

Significance of Naravane’s visit: The Indian Army Chief will be paying a customary goodwill visit including the investiture ceremony wherein he will be conferred upon the honorary rank of General of the Nepali Army. This has been the tradition since 1950. The first to be conferred this honor was the then Indian Commander-in-Chief Gen Kodandera Madappa Cariappa. Reciprocal gestures have continued since then.

The current visit program was approved by the Nepal Government in February 2020. But it was postponed due to the lockdowns in both countries to manage the crisis created by the COVID-19 pandemic. NA Chief Gen Purna Chandra Thapa has already visited India to receive the title of the General of the Indian Army.

Gen. Naravane’s visit, a continuation of the customary tradition between Nepali and the Indian army going back to 1950, will contribute to maintain and further strengthen cordial relations between them. But beyond the military to military relations, such a visit can play an important role in support of the two governments’ attempts to break the deadlock at the diplomatic levels. As a matter of fact, this visit can be interpreted as the willingness of both governments to create the opening for dialogue at other levels. First high-level visit after the territorial dispute, this could be the icebreaker, a confidence-building measure, creating a conducive environment for diplomatic negotiations and fruitful engagements to resume.

Warm and Friendly welcome to Gen. Naravane: The border dispute has taken Nepal-India relations to one of its historic lows. In the immediate aftermath of changing maps and heated debates calling their own claims as based on historical evidence and questioning the motive of the other, a “cooling down” period to prevent relations from deteriorating further was needed. But sooner than later both South Asian neighbors, interlinked with inextricable bonds of history, geography, politics, economics, security, culture and religion, must meet to resolve the problem through serious and friendly negotiations.

Disruptions of such multi-dimensional relations for long are counter-productive to both. Nepal has made efforts for negotiations. The decision to go ahead with this visit signals the interest of the Indian side also to move forward from the current deadlock. Gen Naravane’s visit gives both sides the opportunity to put forth their respective views and move forward.

It is true that some reported remarks of Gen. Naravane on the border issue was uncalled for, particularly in view of the longstanding close relations not only between the two countries but particularly between the two armies. But, reversing his earlier remarks, which was criticized even inside India, later in Dehradun, he emphasized the strong bonds of friendship between India and Nepal. His statement as reported in the media “Our relationship with them (Nepal) has always been strong and will remain strong in the future” can very well be interpreted as a correction of his earlier comments.

It is also important to put this visit in a broader context wherein Nepal and India need to look for ways to break the diplomatic deadlock. Due to internal undercurrents of their respective domestic politics, leaders on both sides do not want to be seen as being “soft”. Yet both know very well they need an opening allowing them to engage constructively and move forward. A successful visit of the Indian Army Chief can be an important opening for moving forward.

In this context, it must be stressed that any attempt from any side to oppose or disrupt the Indian Army Chief’s visit program or humiliate the General will be extremely serious and counter-productive for Nepal. Hence, not only should all Nepal is refrain from engaging in any untoward acts but also come together and extend a warm and friendly welcome to our important guest. This is both our tradition and culture and ultimately in our national interest.

Don’t expect Immediate Result: Kalapani has been a longstanding and difficult issue between Nepal and India. So, it will be impractical to expect any reference to this from Gen Naravane during his visit. It may also be prudent for the Nepali side to be diplomatic, particularly in public statements. But the visit, during closed-door meetings, surely gives us the opportunity to explain our position and set the tone for future engagements. The fact that this visit is taking place is in itself a success. As a possible outcome of this visit, the Indian Army may provide some additional assistance in the form of military hardware and training opportunities for the NA. But the true measure of success of the visit will be in the environment it can create for diplomatic, and if necessary, political level negotiations in the near future.

Successful Defense Diplomacy: This visit should not be judged by its immediate and apparent outcomes alone. Because, the security sector, the Indian Army, in particular, has been and will be even more important among the main determinants of India’s Nepal policy. This is not only due to the presence of over 30, 000 Nepali soldiers in the Indian Army but also the long history of cooperation between the two armies. That is why military channel of communication has been useful in previous crises when other avenues have been ineffective, as in the case of the economic blockade of 2015. This is what makes the current visit so much more significant and Nepal’s responsibility in making it successful so crucial.

The national army is one of the main institutions of the State and defense diplomacy an integral part of the country’s diplomacy. In view of the importance of relations with India, at times of strain, it is always vital for the country’s diplomatic strategy to keep as many channels of communication open as possible. Inflammatory public statements by individuals in important positions can close even open channels of communications, further deteriorating the already strained relations.

That is why, despite pressure from many quarters, NA Chief Gen. Purna Chandra Thapa demonstrated maturity and pragmatism by refusing to make any remarks in public in response to his Indian counterpart’s comments. This wisdom helped create the environment for this long-stalled visit to take place now. Successful completion of the visit now can create a conducive environment for stalled negotiations between Nepal and India. Such successful defense diplomacy by NA and its leadership can ultimately serve the cause of national interest and security by contributing in restoring the friendly ties with India and hopefully transforming this vital relation even higher for greater mutual benefits of both sides in the future.

Former Ambassador Dr. Simkhada is now a member of the Infrastructure Development Committee and Chair - Academic Sub-Committee of the National Defense University, Nepal

Nepal Was And Will Always Be A Country That We Will Be Proud To Continue Our Cooperation By Hanan Goder-Goldberg 3 days, 11 hours ago

The Opening Of The Airport Is A Milestone In Nepal’s Aviation And Tourism Sectors By Arnaud Cauchois 6 days, 20 hours ago