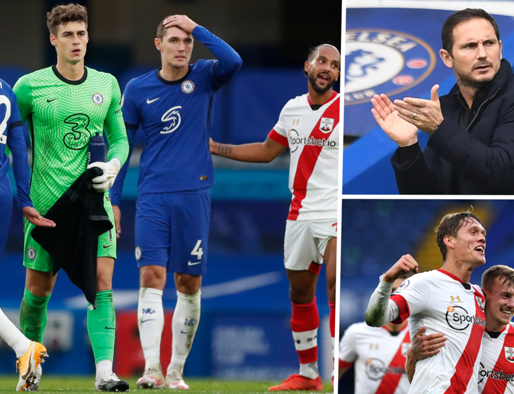 Frank Lampard has revealed that his Chelsea players missed the tactical instruction to 'go long' from the back to break Southampton's press in the 3-3 draw at Stamford Bridge.Goal

Chelsea squandered a two-goal lead against the Saints as Timo Werner's stunning double was cancelled out by goals from Danny Ings and Che Adams.

Kai Havertz restored the Blues' lead, but Ralph Hasenhuttl's side dominated throughout the second half and ultimately got their equaliser when Jannik Vestergaard headed home in stoppage time.

Having conceded 54 goals last season, and continued to struggle at the back this season, Lampard says that his tactical instruction to play longer fell on deaf ears.

"I certainly didn't want to play brave football in the last moments of the game," Lampard said. "That was my message to them, that I wanted them to go longer and break the press. I don't think the players did that enough.

"We tried to play too much and some of that is ingrained in the players that they want to try and play football. That's certainly something I am not a big advocate of with high pressure, as something you can do is miss out the pressure to get the ball high up the pitch and use the players at the other end of the pitch.

"That was probably my biggest disappointment that the players didn't put into action."

Chelsea face a difficult week now with a first Champions League clash against Europa League holders Sevilla before travelling to Old Trafford to face Manchester United in the Premier League.

Lampard went onto clarify that he believes his players didn't understand the importance of the instruction, rather than it being a communication issue.

"I am not concerned about the communication; we certainly work very hard through the week to have that," he added. "What I am concerned with is game management and, in the game, the players have to gauge that on the pitch, it is part of what being a top player at Chelsea is about.

"Absolutely, it is the players' choice. If there is a moment where the players have to see out a game, then we have to do that on the pitch and it isn't about communication from that point at all."

Chelsea's new goalkeeper Edouard Mendy could miss both the upcoming games, which means Kepa Arrizabalaga will continue in goal despite conceding three against Southampton.

Kepa has come under intense scrutiny due to his shot-stopping difficulties and a series of high-profile mistakes, but Lampard has repeatedly moved to protect the club's record signing and explained why he doesn't look to scapegoat the confidence-hit Spain international.

"It is my job to do it," he added. "Kepa is a goalkeeper at this club and we know he came in on a big transfer, there's certainly no hiding from that. It draws people's eyes and attention on Kepa. Then he becomes Spain's number one, the minute he is the number one or number two [that draws attention].

"The big thing for me at Chelsea is that my players, if they are in difficult moments, then a huge thing in football is confidence. Kepa needs to be supported in that way and I will always support him in that.

"He knows that behind the scenes because of how I talk to him, how I played him, last year there were tough moments for him but we kept trying to find the right solutions. That's my job to do that.

"I cannot control every performance on the pitch but I can certainly try to protect the players that go out on the pitch and, in the week, the goalkeeper one is always a specialist position as they spend time working with their specific coaches, but my point of view as a manager remains the same."