There is a significant rebuild ongoing, but in the Argentine's last season with the club his chances of winning a fifth European title are slim 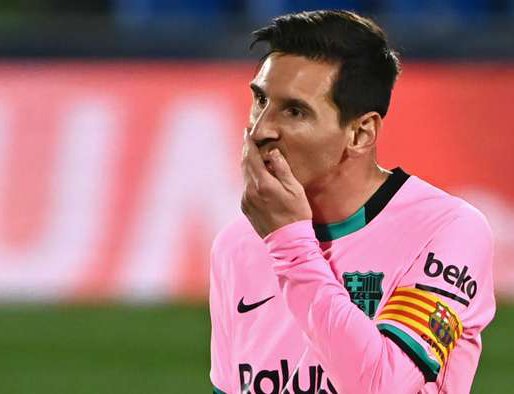 Lionel Messi will be less than a month away from his 34th birthday, and potentially on the cusp of leaving Barcelona. The Argentine star, who so badly wanted to flee this summer to a new home where he can win what he desires most - a fifth European Cup - must play out the final year on his deal. Other clubs can approach him from January.

Messi is conscious this will be his last shot at winning the Champions League with Barca, and the final year with the club he debuted for 16 Octobers ago - his Last Dance. Goal

If any footballer can be compared to legendary basketball star Michael Jordan, it is Messi. He doesn’t speak as openly as Jordan did, but nobody is under any false pretenses at Barcelona - the Argentine has power.

Unlike the Chicago Bulls general manager Jerry Krause, who kept the veterans together for their sixth NBA championship in 1998, badly-managed books have forced Barcelona president Josep Maria Bartomeu to sell off the club’s older stars early.

Luis Suarez, virtually a brother to Messi, dispatched to Atletico Madrid, Arturo Vidal to Inter and Ivan Rakitic returning to Sevilla; several players with whom Messi has dominated Spanish football have been dispersed.

The rebuild has begun, with Ronald Koeman at the helm, and youthful faces are filling the squad - Ansu Fati, 17, Pedri, 17, Ronald Araujo, 21, Sergino Dest, 19, Riqui Puig, 21, Carles Alena, 22, Trincao, 20. These are the team-mates Messi needs to perform alongside him if the team has any hope of breaking their streak of brutal Champions League eliminations.

The chance they will is low.

Not through any fault of their own; they are still developing, many are likely years from their best. Being knocked out by Roma in 2018 was bad enough, throwing away a three-goal first-leg lead. Then came Liverpool in 2019, where Barcelona pulled off the same miserable trick.

Most savagely, the 8-2 capitulation against Bayern Munich in Lisbon, just a couple of months ago. That sparked the big changes at Camp Nou, in truth needed years ago, and contributed to Messi’s bid to leave.

Certainly the young blood should be able to offer more energy when it comes to pressing in the attack, as we have seen in the first few La Liga matches. Physically they were beaten by Bayern in every department.

Barca started well under Koeman, a team chastened by recent events but determined to find their way back to the top of the game. The defeat by Getafe at the weekend shows there is a long way to go.

Returning to dominate Europe could take years, and Messi doesn’t have that time.

"Today I am less obsessed with scoring," Messi said in a recent interview for magazine Garganta Poderosa. “I try to do my best for the team.” He can only cross his fingers and hope the team do right by him too. In recent years that hasn’t been the case.

It borders on a crime that Messi has not won the Champions League in half a decade, lifting it in 2015 in Berlin, after the swashbuckling football of Luis Enrique’s ‘MSN’-powered attack helped Barcelona vanquish Juventus.

The goal scorers for Barcelona in that final have all left the club; Neymar first in 2017, and Rakitic and Suarez this summer. Even with Messi in the team, Barcelona can no longer be considered one of the frontrunners for the trophy, but, as they welcome Ferencvaros in the opening group stage match on Tuesday, there is still some hope.

A revitalised Philippe Coutinho seems determined to crawl out from under the weight of being the club’s record signing at €160 million ($189m). The double pivot seems to be giving Sergio Busquets more breathing room in midfield, alongside Frenkie de Jong, while new signing Dest will hope to succeed where Nelson Semedo was never quite able to.

Perhaps the one piece of the puzzle which doesn’t quite fit, yet, is Messi himself. For the first time since he was a teenager just breaking through, this looks like a Barcelona side with Messi in it rather than Messi’s Barcelona.

Koeman has put the striker back in the false nine roles he shone in at the start of the decade, from where he scored a record 73 goals in the 2011-12 season. Without the electric pace he used to boast, it seems harder for Messi to cause damage here than starting off out wide, drifting into the danger zone instead of drifting out of it.

Messi has not scored from open play yet this season, netting a penalty on an opening day against Villarreal, but his running and grit against Celta Vigo, when Barca played with only 10 men after Clement Lenglet’s dismissal, show his heart is still in the fight.

"His discontent with the club was clear, but in the end, it worked out and from the moment he said [he will stay] he's done everything expected of him," Koeman told Dutch channel NOS last week.

Messi again fired blanks against Sevilla and Getafe, unable to make the impact we have come to demand of him. Against the latter, he was on the right and later deep in midfield.

Koeman must keep working on his positioning of Messi, because the forward is still the team’s best player, finishing top scorer last season, and needs to be at the sharp end of things. Regardless of where on the pitch he is deployed, he will still give everything left in him. He has no choice, the desire to succeed is too great for him to sit around and sulk.

“We have to be united and assume the best is yet to come," Messi said hopefully. It’s not a safe assumption. One more year, one more shot at the crown, this is Messi’s Last Dance.