PHDCCI Pitches For India To Be A Hub Of Sustainable Mobility

PHDCCI Pitches For India To Be A Hub Of Sustainable Mobility 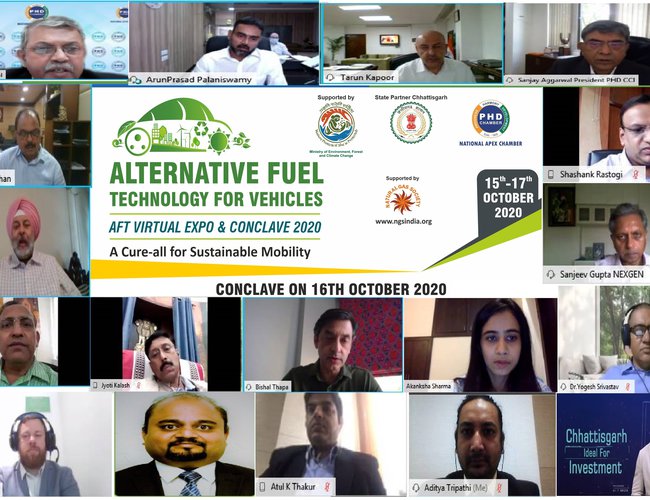 India is becoming a leader in CNG, there has been a significant transition with the need to move towards cleaner fuels like CNG, ethanol, bio-diesel, and electric vehicles, deliberated Mr. Tarun Kapoor, Secretary, Ministry of Petroleum & Natural Gas, Government of India in the Inaugural Session of “Alternative Fuel Technology for Vehicles: A Cure-all for Sustainable Mobility” organized by PHD Chamber of Commerce and Industry (PHDCCI) in association with CSIDC, Govt of Chhattisgarh, in its first-ever "AFT Virtual Expo & Conclave 2020" with Ministry of Environment, Forest & Climate Change (MoEF&CC), Government of India, as the partnering Ministry.

Tarun Kapoor mentioned that we need to ensure that CNG is available and affordable ensuring that vehicles are modeled to incorporate CNG smoothly. Discussing city gas distribution, he shared that there is significant work happening especially in the infrastructure so that CNG is seamlessly available. We will be doing a pilot project in Delhi on HCNG that will improve efficiency and reduce emissions drastically.

Talking about ethanol, he mentioned that by the next year, we want to take a jump in the ethanol production and we are planning to introduce E12 and E15 shortly. Gradually, we will have blended petrol all over the country and moving to a higher percentage. We have to make pure ethanol available that is happening in several countries and, some countries also have multi-fuel vehicles like Brazil. There is a pilot project which will be implemented for pure ethanol that will take place in Pune shortly.

Kapoor deliberated about the need to make biodiesel affordable and freely available. On the sector of compressed biogas, he discussed that it's an area of focus as it's important for the agriculture sector and, there is a huge source available in the country. He also discussed the projects undertaken by the government for setting up biogas plants that will help in producing a large quantity of biogas that will also flow in the city gas distribution network making it available along with CNG.

On Electric Vehicles, the oil marketing companies are available to facilitate and, we are looking forward to better swapping coming to the petrol station, retail outlets, putting up electric charging. We look forward to work closely with the industry so that we can go forward, said Kapoor.

P Arun Prasad, Managing Director, CSIDC, Government of Chhattisgarh giving an outlook about the bioenergy and the initiatives and schemes undertaken by the Government of Chhattisgarh to promote bioethanol by using the surplus of rice available in the state that is increasing investors and promoting the production of bioethanol. We have made it a high priority project for Chhattisgarh and, we have the raw material to produce a large amount of ethanol. He highlighted that the energy sector will be one of the core components in making India Self-Reliant.

E S Ranganathan, Director-Marketing, Gail India Ltd while discussing the increase in the production of diverse variety automobile vehicles mentioned that LNG has been adopted by many parts of the world and in some parts of India. He also mentioned the steps undertaken to increased LNG infrastructure especially in the highways and key road links. Talking about the potential of biofuel and biogas, he discussed the advantages and increased usage of these alternative sources of energy. He highlighted the need to have electric vehicles in the country that will help to curb pollution.

Sanjay Aggarwal, President, PHDCCI in is his presidential address deliberated about Alternative Fuel Technology (AFT) that will help in ensuring cleaner alternatives for mobility and will help in reflecting the commitment for Sustainable Development Goal (SDGs) as mandated by the United Nations. He discussed the advantages of AFT that is a clean, green, and cost-effective alternative to the other fuels and technologies at the same time giving a strong possibility of convergence of the stakeholders for exploring the opportunities with AFT for favorable social-environmental impact and sustainable commercial uses.

Aggarwal mentioned that India is one of the world's fastest-growing economies have significant bearings with the adoption of a sustainable model of transportation and environmental protection. With the government intervening and taking up the matter seriously, to curb the urban pollution and attain sustainable mobility, Aggarwal lauded the initiatives taken by the Government of Chhattisgarh that is leading in promoting Ethanol and other key components for ensuring sustainable mobility.

Talking about the future growth of the Electric Vehicle market, he mentioned that India has the potential to become one of the largest Electric Vehicles (EVs) markets in the world, with the government push for the segment to curb pollution. India has one of the biggest fleet of natural gas vehicles in the world with the highest Natural Gas Vehicle (NGV) growth potential in the world and with the Central and the State Governments aiming to bring electric and hybrid vehicles on the road, it is sure to ignite the growth in the industry soon.

The new Aatma Nirbhar Bharat has got to be up to scratch and, for being competitive with the world, we need to understand that mobility and vehicles need fuel on the go. Alternate fuels should be made available on the go as India’s time to lead in this segment has arrived now, Ambassador Manjeev Singh Puri, Senior Indian Diplomat & India’s Former Ambassador to Nepal, European Union, Belgium, Luxembourg and the United Nations reflected on during the Conclave.

Sham Lal Goyal, Additional Chief Secretary & Resident Commissioner, Government of Maharashtra shared about the progressive initiatives undertaken by Maharashtra in solar, electric vehicles, promotion of alternative fuels and mentioned that we need to focus on solar and fossil fuel energy. He suggested that there is a need to shape the projects about biofuels processing in rural areas. We can generate green waste by encouraging plantations that can increase farmers’ income and can produce biofuel that in return can reduce pollution as well. He also suggested that the government should come up with robust policies to promote the industries at the earliest.

Jyoti Kalash, Additional Chief Secretary & Principal Resident Commissioner, Government of Nagaland shared that Alternative Fuel Technology has huge potential in the northeastern states and, a lot of production is required for the adoption of these new technologies. He also shared that there needs to be a market for selling this and, we need to create opportunities for the same. He discussed the environment and cost-related benefits of AFTs.

Nikhil Moghe, Partner, KPMG in his presentation deliberated about the Indian Road transportation network that is one of the fastest-growing networks of the world with a focus on moving towards greater adoption of cleaner and greener fuels. Akanksha Sharma, Head-Social Impact & Sustainability, Sterlite Technologies Ltd shared a global perspective about the energy sector where many people don’t have access to clean fuel and fuels for cooking. Talking about SDGs, she mentioned that to make energy reach every part of the world, there is a need for rapid thought-through policies. She suggested that the institutions should come up with subsidizing schemes for encouraging industry to take up these alternative forms of energy.

Bishal Thapa, Managing Director, Saral Urja mentioned that technology is evolving and multiplying in many different ways and, we need to look at a diverse portfolio of fuels. We need to think about technology diversity and look at a variety of fuels at the same time catering to digital transformation. He discussed the potential of hydrogen and its application across different verticals. Mr. Justin Lane, Business Analyst, InoBat Auto while sharing a global perspective shared that electrification of all modes of transport is gaining momentum driving increased EV adoption. He gave an in-depth understanding of the Standard Cell, Tailored Cell, Custom Cell, and Battery modules and packs.

Sanjeev Gupta, Chairman, Power, Renewable & Alternate Energy Committee, PHDCCI shared that oil and gas are the core sectors in the economic development of the country which are contributing significantly to India’s GDP. He discussed the initiatives undertaken by the ministry in the promotion of alternative fuels that are giving a boost in the usage and production of these alternative fuels.

Saurabh Sanyal, Secretary-General, PHDCCI in his concluding remarks reflected broadly on how in the last few years the government and industry in India under the leadership of Prime Minister Shri Narendra Modi have taken the matter of clean energy and AFT seriously. In a bid to curb urban pollution and attain sustainable mobility, India can emerge as a global leader in this segment, added Mr. Sanyal.