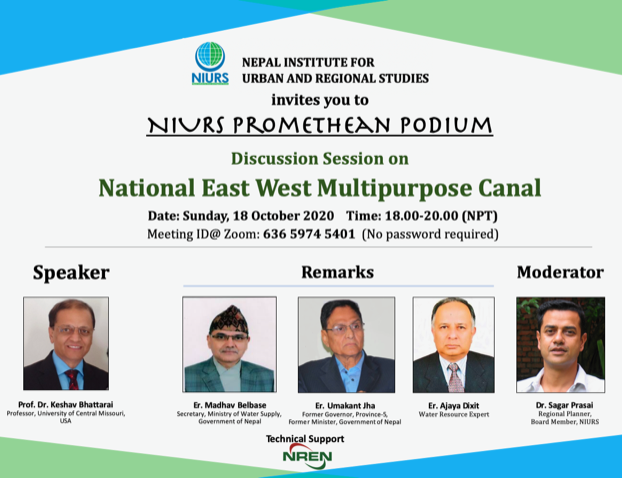 He said that such construction is impossible given Nepal’s north-south slopes from the east to west. Secretary Belbase argued that there are several river basins included across the region.

He said that Kosi sediments are estimated to be one hundred million cubic meters per year which is enough to build dyke three times round the earth along the equator. Belbase added that River sediments are big challenges in constructing a canal of this size arguing that sediments in Nepal cannot be controlled merely by increasing vegetation, high-intensity rainfall and fragile hill slopes are the reason for the and sediments.

Belbase said that 50% of the dead storage was filled by the 1993 single-day event in Kulekhani, the watershed is best protected. He also said that flood damages are more by small and medium rivers than the big rivers he said that the size of flood control freed board is a peanut. In 2014 the damage by Kamala and Babai was similar to the same data.

Organized by Nepal Institute for Urban and Regional Studies (NIURS) a discussion was held under Promethean Podium. Moderated by Sagar Prasai regional planner and board member of NIURS, Dr. Jagadish Chandra Pokharel, former vice-chairman of the National Planning Commission and chairman of NIURS started the program with opening remarks.

Pokharel said that the discussion is organized to generate the debate whether the national East-West Multi-Purpose Canal can help Nepal.

The main speaker of the concept Bhattarai said that their proposed East-West Multi-Purpose Canal is still a concept developed to support how Nepal’s water resources are exploited to bring tangible change in the country.

“The proposed Grand Canal can irrigate some 8,000 square kilometers of land that is not currently irrigated in the Nepali plains, generate a significant amount of solar power, produce some hydropower as a byproduct, usher an era of commercial water navigation, recharge the ever depleting groundwater, help control flood, and promote opportunities for tourism and recreation generating thousands of direct and indirect jobs. Our proposal, which is an expanded the initial concepts, provide a high-level overview of some technical, environmental and social issues related to the different aspects of the proposed canal project

He said that the proposed Grand Canal can irrigate some 8,000 square kilometers of land that is not currently irrigated in the Nepali plains, generate a significant amount of solar power, produce some hydropower as a byproduct, usher an era of commercial water navigation, recharge the ever depleting groundwater, help control flood, and promote opportunities for tourism and recreation generating thousands of direct and indirect jobs.

Having worked over 28 years of working experience at various levels in the Government of Nepal, secretary Belbase in his detailed presentation technically proved that the concept is against Nepal’s topography and river basins, slopes and flows, of water.

Ajaya Dixit, a renowned water resources expert having conducted a number of studies and published books and articles, said that one has to look at technical limitations and cost.

“About 100 years after Major Arthur Cotton's first proposed river linking in India 1850s, a plan of National Water Grid was made in the 1960s. This Water Grid proposal was abandoned because of its technical limitations and exceptionally high costs,” said Ajaya Dixit.

“Pilot Dinshaw J. Dastur proposed a Garland Canal from Meghalaya in the east to river Ravi in the west via Nepal along the south of the Siwalik. The Garland Canal proposal was without any trace of scientific thinking and engineering fundamentals. This present proposal, a remerged version of Garland Canal, is totally out of step with the country’s hydro-ecology, economic, social and environmental challenges, priorities, disaster risks and regional black swans.”

During the debate, former minister Umakanta Jha, who also served a long period of time in the Ministry of Water Resources, spoke dubiously. Jha’s argument was full of ambiguity.

At a time when India is unable to continue the river linking project in its territory because of insurmountable economic, social and environmental challenges, many questions the timing of starting debate on river linking debates in Nepal.

Government officials, who have been taking part in Nepal-India water resources negotiations, said that India has long been pressing Nepal to accept the Kosi river diversion scheme. After vehement opposition from Nepal, India has formally dropped it.

In this context, why few NRNs, with a poor understanding of the history of water resources of Nepal and India, forwarded hare brain agenda raises many questions. After the discussions, Nepal’s experts proved that the agenda is a futile exercise. Even initiators of the agenda is unable to defend it technically, economically and environmentally.