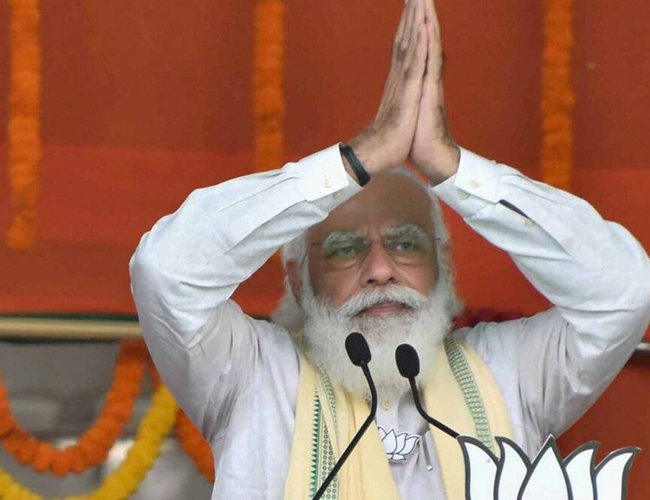 Speaking in Sasaram, Prime Minister Narendra Modi asked the people to choose "development", and ensure those who had made Bihar a "Bimaru" state were not voted back.

In his first rally in poll-bound Bihar, Prime Minister Narendra Modi Friday reminded the people of the work the NDA government had accomplished in the state following a 15-year tenure of the RJD government, which was filled with crime and corruption. Speaking in Sasaram, he asked the people to choose “development”, and ensure those who had made Bihar a “Bimaru” state were not voted back.

‘BIMARU’ is an acronym for Bihar, Madhya Pradesh, Rajasthan and Uttar Pradesh, which was first used to refer to their poor economic conditions.

“The people who once governed Bihar are again looking at the developing state with greedy eyes. But, Bihar must not forget who pushed them backward… that was a time when the state had poor law and order and corruption,” he said. “The people of Bihar cannot forget the era when life would come to a standstill after sunset. Today, roads, electricity and lights are there. The biggest thing is that a common man in the state can live without any fear.” Follow Bihar Election 2020 Live Updates

PM Modi said a “double-engine” government — an NDA government at the Centre and the state — would help Bihar develop at a fast pace.

While speaking about his government’s decision to revoke Article 370 in Jammu and Kashmir, PM Modi targeted the Opposition for “siding” with those conspiring to weaken India. He also raised the Galwan Valley faceoff and Pulwama attack, saying the sons of Bihar had laid down their lives for the country.

“The NDA government abrogated Article 370. These people say they will bring it back if they come to power. How dare they seek votes in Bihar? Is this not an insult to the state… the state which sends its sons and daughters to the borders to protect the country,” he asked.

PM Modi was addressing the rally along with Bihar Chief Minister Nitish Kumar. Ahead of his address, Kumar thanked the people for showing up in large numbers despite the Covid-19 pandemic. PM Modi also commended the people for their fight against the pandemic.

“Under the leadership of PM Modi, we have worked for the development of Bihar. If given another chance to serve the state, we will make sure irrigation facilities and the benefits of latest technology are available in every village,” Kumar told the crowd.

Other politicians including Congress party’s Rahul Gandhi also attended big rallies in the eastern state of Bihar, where local elections start in phases from next week, with many unmasked participants trying to get a glimpse of the leaders.

India has been among the worst hit by the coronavirus, with the second-highest amount of cases globally, and experts worry big gatherings like the political rallies could trigger a fresh spike in cases.