Navratri Day 8: The Significance Of Maa Mahagauri And Ashtami Rituals

Navratri Day 8: The Significance Of Maa Mahagauri And Ashtami Rituals 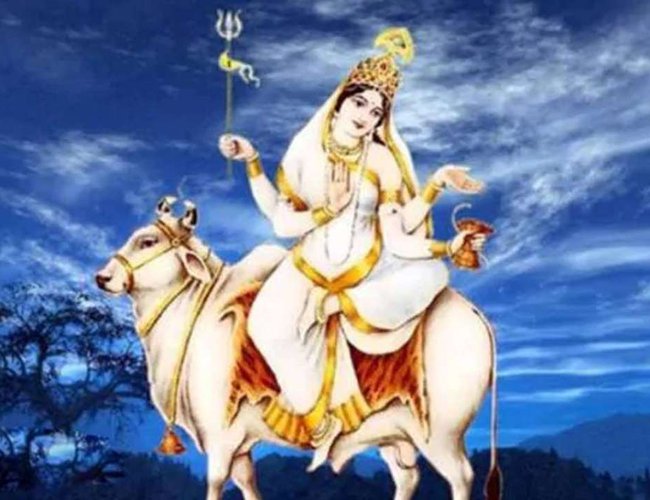 Mahagauri Maa is one of the most compassionate sides of Maa Durga. Mahagauri, as the name suggests, is of a fair complexion. She holds a trident and damru in the upper right and left hands, respectively. And she holds the Abhaya and Vara Mudra in the lower hands. This form of the Mother Goddess is mounted on a bull. Mahagauri governs Shukla Paksha (waxing phase of the Moon), and hence, those suffering from the ill-effects of the planet worship her to rid themselves of its adverse influence.

Sing an Aarti to conclude the pooja and offer your salutations by lighting a camphor. Distribute the prasad (bhog) after the puja.

Ashtami — the eight day of the Hindu festival Navratri is here. This year, Ashtami is on Saturday, October 24. It is marked as the day when Goddess Mahagauri, an avatar of Goddess Durga, is worshipped.

On the penultimate day of Navratri, prayers and offerings are given to the eighth form of the Navdurga. It is the belief that Goddess Mahagauri governs the planet Rahu which is considered to be a malefic planet.

She is also known as Vrisharudha because she is depicted mounted on a bull. Maa Mahagauri is shown to have four arms — one of them with the weapon trishul. Her second hand has a damaru, third one is shown in Abhaya Mudra, while fourth is in Varada Mudra.

The carrier of Maa Mahagauri is a bull. In her depiction, she is shown as mounted on a bull and thus, is also known as Vrisharudha.

For worshipping Maa Mahagauri on Ashtami, present white flowers (preferably jasmine) as an offering and recite mantras. On this day, young girls are invited home and offered an auspicious meal as a part of the puja. The prayer ritual is called Kanjak pujan.

It is considered that praying to Goddess Mahagauri will take your troubles away. As she governs the malefic planet Rahu, praying to her can remove the planetary defects and a person will be blessed with growth and happiness in life. This is why the day Maha Ashtami is considered to be the day when devotees should pray for removal of sufferings from their life.