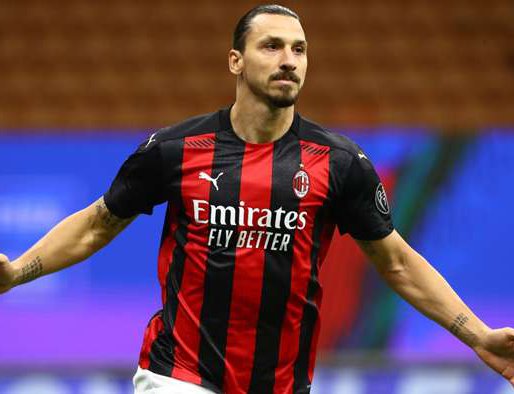 Milan's 100 percent start to the season in Serie A was ended by Roma after a 3-3 draw in which Zlatan Ibrahimovic scored twice.

Zlatan Ibrahimovic scored twice but Milan's perfect start to the season was ended by Roma after a thrilling 3-3 San Siro draw on Monday.Goal

Ibrahimovic put Milan ahead early on with a deft finish from close range but Edin Dzeko equalized shortly afterward with a header.

Alexis Saelemaekers edged Milan in front again with a composed finish only for Jordan Veretout to draw Roma level from the penalty spot.

Ibrahimovic netted a penalty of his own 11 minutes from time, but Milan were denied a fifth consecutive victory when Marash Kumbulla volleyed in a dramatic late equalizer.

Ibrahimovic gave Milan the lead in the second minute with an intelligent poacher's goal after he got on the end of a delicious Rafael Leao lofted pass.

However, Roma were back on level terms 10 minutes later after a goalkeeping error from Milan's Ciprian Tatarusanu on his first competitive start for the Rossoneri.

The Romanian, deputizing for Gianluigi Donnarumma after he tested positive for COVID-19, came to punch Lorenzo Pellegrini's corner but completely missed the ball, which allowed Dzeko to head home.

Milan increased their advantage shortly after the interval with Leao instrumental again as he burst down the left flank and crossed for Saelemaekers who confidently fired his shot beyond Roma goalkeeper Antonio Mirante.

Roma was awarded a controversial penalty, though, when Ismael Bennacer was deemed to have brought down Pedro despite appearing to be fouled himself, and Veretout confidently converted.

Ibrahimovic thought he had secured the points when he sent Mirante the wrong way with a spot-kick, again controversially awarded, after Hakan Calhanoglu was felled by Gianluca Mancini.

Roma refused to give up, though and gained a share of the spoils with seven minutes remaining when Kumbulla got on the end of a flick from a corner to slam the ball home.