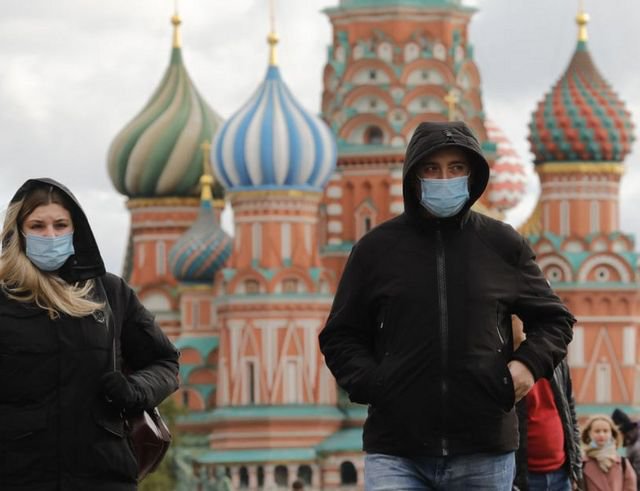 Europe's daily Covid deaths rose by nearly 40% compared with the previous week, the World Health Organization (WHO) has told the BBC.

WHO spokeswoman Dr Margaret Harris said France, Spain, the UK, the Netherlands and Russia accounted for the majority of cases which increased by a third.

"The concern... is that intensive care units in hospitals are now beginning to fill with very ill people," she warned.

There has been a sharp increase in Italy too, with 221 fatalities announced in the past 24 hours. The total number of fatalities in Austria went above 1,000 on Tuesday.

Russia has the world's fourth highest number of Covid-19 cases after the US, India and Brazil. It recorded another 16,550 infections on Tuesday alone and authorities have now made the wearing of face masks compulsory in all crowded places.

While infections surged in Italy too, to almost 22,000 in the past 24 hours, officials said testing had also been ramped up. Protests took place in towns and cities across Italy on Monday evening against a new round of restrictions.

And in Belgium, doctors have been asked to keep working, even if they have the virus, because the health system is in danger of being overwhelmed.

What did the WHO say?

Speaking to the BBC's World at One programme on Tuesday, Dr Harris said: "Across the European region we're seeing an intense and indeed alarming increase in cases and deaths.

She said daily cases rose by a third compared with the previous week, while daily deaths increased by "close to 40%".

"Despite better management of hospital capacity, hospitals in several countries are filling up fast," she warned.

Dr Harris said the effectiveness of new restrictions imposed in a number European nations could only be analysed in two weeks' time because of "the lag".

"We will see the reduction in cases, but you don't see it overnight," the WHO spokeswoman said.

And asked whether the second wave would be worse than the first one, she replied: "We're going to see a different sort of peak.

"The good news is our hospitals are much better at understanding what's going on here, but the reverse of that is in gaining that experience they've been working incredibly hard for a very long time and they also know that what they are going to face is going to be grim.

"The other good thing in a sense is that the very large numbers we're seeing are in groups that ideally won't progress to the more severe illness - that's the younger groups. But that's not a guarantee.

"Those two factors suggest that we may not see the terrible rise in deaths that we saw in April," Dr Harris said.