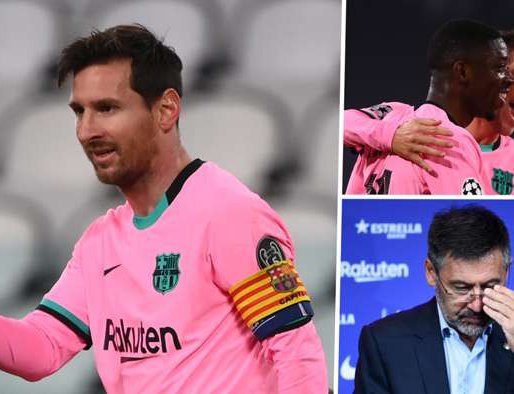 The Argentine recorded a goal and an assist as the Blaugrana celebrated the end of a forgettable era with victory over Juventus in Turin.

Josep Maria Bartomeu is gone as Barcelona president and the Blaugrana are playing good football again.

No, Barca fans, you are not dreaming.Goal

The past few days have been filled with ups and downs at Camp Nou, from Saturday’s Clasico defeat to an impressive 2-0 win at Juventus on Wednesday, but Lionel Messi is smiling again and the club’s supporters can too.

The Argentine slotted home a penalty late on in Turin, adding to Ousmane Dembele’s opener, as Barca took three points in Italy, thus maintaining their 100 percent start to this season's Champions League.

This match, played in the wake of Bartomeu and his board’s resignation on Tuesday night, will likely act as an injection of morale for a club that was left both sad and angry after losing at home against Real Madrid.

Those feelings were compounded when Bartomeu claimed on Monday that he had "no reason to resign", despite the impending vote of confidence against him.

But 24 hours later, the president was gone. The club’s errors during his reign could fill a book and almost culminated in Messi walking away from the club this summer.

He still might, at the end of the season, but now a new man will get the chance to convince him to stay beyond the length of his current deal.

The players, who even beyond Messi, have been at odds with the board recently, seemed invigorated. Ronald Koeman’s side started fast.

Antoine Griezmann smashed a shot against the post, Messi had an effort well saved by Wojciech Szczesny and eventually Dembele broke the deadlock in the 14th minute.

Messi whipped a spectacular crossfield pass from the left flank to the right, first time, and the France international controlled it immaculately. Dembele moved forward quickly, cutting inside and then back out, showing off his two-footedness and dribbling ability.

With the defense on the back foot, the ex-Borussia Dortmund star launched a shot at goal which took a huge deflection and looped into the net past the helpless Szczensy.

Of course, Dembele is one of the most expensive mistakes the club has made in the transfer market, with injury keeping him from finding any semblance of form since joining in 2017.

That said, it is not too late. There is a desperate need for his skill and pace in this team, as well as someone who can provide width on the right. Koeman wanted him out during the summer, but Dembele’s stock has risen with this performance.

Pedri’s, meanwhile, has gone through the roof.

The 17-year-old midfielder impressed Koeman from the word go this summer following his arrival from Las Palmas, and this display was just reward for the coach’s faith in him.

One roulette while bringing the ball out of defence in the first half was not just a sublime moment of skill, but showed that despite his age, he has ice in his veins. Having previously been likened to Andres Iniesta, the teenager looks extremely comfortable playing at this level and has a huge future ahead of him.

He played his part in Barca creating several chances either side of half-time which went to waste, and they deserved their eventual second, scored at the death from the spot by Messi after Merih Demiral had been sent-off for the hosts.

In all Barca passed the ball positively and moved well, in what was the best display of the Koeman era so far.

That is not to say this was a perfect performance, with Juventus striker Alvaro Morata seeing a hat-trick of goals disallowed for offside by VAR, with Barca too profligate at times.

Quarantined Juventus forward Cristiano Ronaldo, watching at home, would have relished reviving his rivalry with the Catalans against a weakened defence, and will still get the chance to face them at Camp Nou in December.

But this was a night for Barcelona and their fans to celebrate. After substitute Ansu Fati also erred badly in front of goal in stoppage time, the youngster could afford to flash a wry grin towards Messi.

A weight has been lifted at the club. The good times could be on the way back.