Nepal-India Will Resolve Issues Through A Dialogue: PM Oli

Nepal-India Will Resolve Issues Through A Dialogue: PM Oli 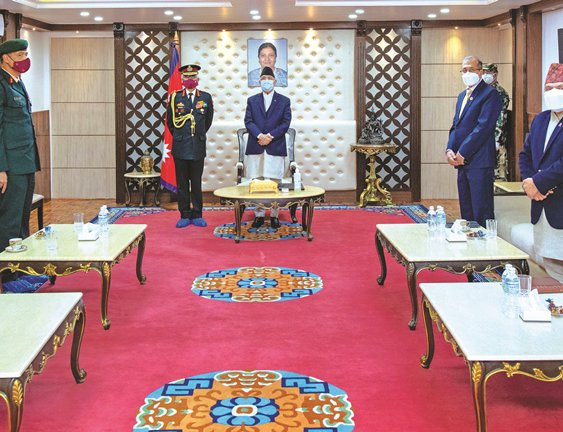 Prime Minister KP Sharma Oli on Friday said that there was a good friendship between Nepal and India and that the issues between the two countries would be resolved through dialogue reports The Rising Nepal.

Prime Minister Oli made this remark while talking to visiting Indian Army Chief Manoj Mukund Naravane, who had reached the former’s official residence in Baluwatar this afternoon to pay a courtesy call said the Daily.

General Naravane came to Nepal on a three-day official visit on Wednesday at the invitation of Chief of Nepali Army General Purna Chandra Thapa.

Dr. Rajan Bhattarai, Foreign Affairs Advisor to Prime Minister Oli, said during the meeting the Prime Minister expressed that Nepal and India had centuries-old special relationship and that would remain intact forever.

"There is a tradition of conferring honorary rank of General on the Army Chiefs of the two countries," Dr. Bhattarai quoted PM Oli as saying. He also explained about the beginning of this tradition.

Nepal Army Collects Over 30,000 KG Of Wastes From Major Mountains By Agencies 19 hours, 7 minutes ago