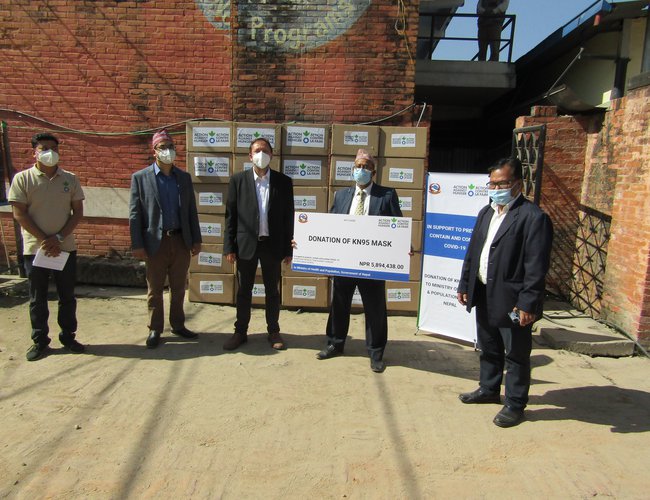 Action Against Hunger Nepal’s Country Director Philippe Hamel handed over KN95 mask worth of Rs. 5.8 million to Dr. Dipendra Raman Singh, Director General of the Department of Health Services DoHS and Dr. Ramesh Kharel, Director of the Management Division under the DoHS amid a program today at DoHS premices Teku .

According to a press release issued by Action Against Hunger, they will be distributed among front line health workers to combat the ongoing coronavirus (COVID-19) pandemic in Nepal.

The program was organized following Infection Prevention and Control (IPC) measures released by the Ministry of Health and Population, and WHO. It was attended by key government delegates, Action Against Hunger Team and media personnel.

During the program, Director of the Management Division, Dr. Ramesh Kharel expressed his gratitude on behalf of the DoHS towards Action Against Hunger Nepal for their ongoing Covid-19 Response. He further assured that the donated masks will be rightly utilized wherever there is need.

The organization has led the global fight against hunger in nearly 50 countries across the globe since its establishment and has a vast experience in large scale emergency, disaster and calamities. Committed to end child hunger globally, Action Against Hunger saves the lives of malnourished children while providing communities with access to safe water and sustainable solutions to hunger.

Since 2005, the organization is working in Nepal to achieve three major aims: mitigating the consequences of hunger, address the causes of hunger and change the way hunger is viewed and addressed.

Action Against Hunger has also played an important role in emergency response in Nepal during 2105 Earthquake and 2017 Terai Floods. Action Against Hunger Nepal implements integrated programs and works in collaboration with the government and civil society through various programs in Nutrition and Health, WASH (Water, Sanitation & Hygiene) and FSL (Food Security & Livelihood).

Nepal Army Collects Over 30,000 KG Of Wastes From Major Mountains By Agencies 18 hours, 10 minutes ago