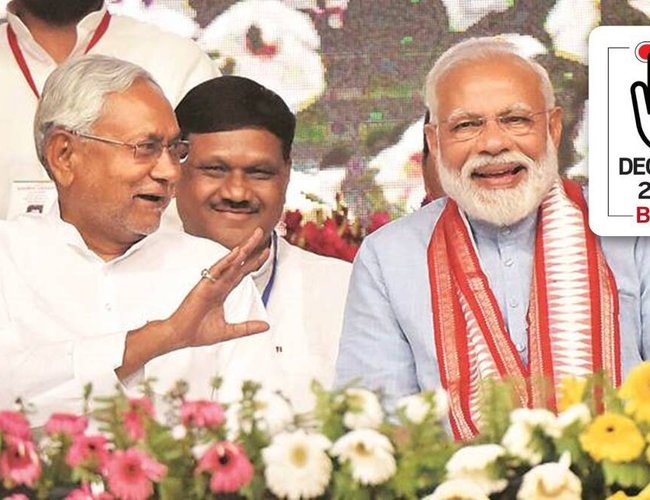 DEFYING MOST exit polls that predicted its rout, the BJP-JD(U) NDA alliance is all set to retain power in Bihar, with the BJP emerging as the dominant partner, according to results Tuesday of the Assembly elections held in three phases over the last two weeks.

As the exigencies of Covid pushed counting late into the evening, the NDA and the Opposition RJD-led Mahagathbandhan or Grand Alliance were headed for a photo finish. Finally, with trends firming up by 11 pm, the NDA pulled ahead with wins and leads totalling 125 seats against the Grand Alliance’s 110 in the 243-member Assembly.

For the NDA, Nitish Kumar 4.0 still looks probable despite the JD(U)’s slide to 43 seats, according to latest projections, but the big takeaway was the BJP’s rise to become the largest party in the alliance with 74 seats — and the role played by the LJP, which broke away from the alliance in the state weeks before polls, in denting the JD(U).

Led by Chirag Paswan, following the death of his father Ram Vilas Paswan days before polls, the LJP managed to win only one of the 137 seats it contested — its worst performance since its inception in October 2000. But its presence as a breakaway element, which put up candidates against the JD(U) and not the BJP, heavily hit the JD(U)’s chances in about 75 seats.

Political observers in Bihar said the LJP has completed its “assignment” of damaging the JD(U) and that Chirag Paswan’s political future “will now depend on the BJP”.

Paswan was relentless in his attacks against Chief Minister Nitish Kumar during the campaign, and did not let up even as votes were being counted Tuesday. “I did not lose courage in difficult times. When it came to contesting polls alone for the pride of Bihar, I did not get nervous. There are some people who have to take help from three allies to remain in power despite being in power for 15 years,” he posted on Twitter in Hindi.

But with the “silent support” for Nitish Kumar from Extremely Backward Classes (EBC) and women voters counting in the alliance’s favour, the next question for the NDA is his future as Chief Minister. Sources in the JD(U) and BJP are sure that he will stay on — at least for now.

“We always kept talking about our silent EBC and women voters, who were not taken into account by the opinion and exit polls,” said Jagnarayan Singh, former Bihar OBC Commission member.

Senior JD(U) leader and former Bihar EBC Commission chairman Udaykant Choudhary had said before the third phase that most of the EBC voters were still with the NDA. Even Union Minister Ravi Shankar Prasad had reiterated that as long the NDA had the confidence of EBC and women voters, it enjoyed an advantage over the Grand Alliance.

In essence, what the 2020 Assembly results reiterated was that despite his government running out of new ideas for governance and slipping in Covid management, the good work done previously by Nitish Kumar in building roads and bridges, and bringing power to villages, continues to sway voters.

JD (U) national spokesperson KC Tyagi said: “Our leader Nitish Kumar was being dismissed after exit poll results but he proved yet again that good governance is always a winning plank. Any Chief Minister can face a bit of anti-incumbency after serving the state for three terms but Nitish Kumar fought it successfully along with Prime Minister Narendra Modi.”

In fact, Nitish Kumar could follow in the footsteps of Bihar’s first Chief Minister Dr Srikrishna Singh to enter a fourth consecutive term at the helm — if Singh’s tenure as prime minister of the state before Independence is included.

But sources said the BJP will be cautious in dealing with Nitish Kumar as the JD(U), RJD, Congress and Left together would have the numbers to form a government. “The BJP will not do anything that can hurt Nitish Kumar. We may well be a junior partner but the election was fought under his leadership. Nitish Kumar will continue to remain indispensable for BJP,” said a JD(U) leader.

BJP sources said that while Nitish Kumar will remain the Chief Minister, the national party will “have a big say” in government formation. “Unlike in past governments with Nitish, the BJP can assert itself. We have almost succeeded in making Bihar politics bipolar. Once Nitish Kumar is out of the political scene, it is BJP versus RJD in Bihar,” the leader said.

On another level, what this election reinforced was how the NDA’s “social combination” outweighed a wave of anti-incumbency that the RJD was banking on.

On the ground, RJD leader Tejashwi Yadav appeared to connect well with voters through his 251 public meetings, drawing huge crowds and sparking a buzz with his promise of 10 lakh jobs. But he faced the question of what his party would bring to the table apart from its traditional Muslim-Yadav pitch.

In comparison, the NDA proved again that in Bihar, when two opposite poles get together in politics, the loser is always a third party. This has become a tested formula in Bihar over the last four Assembly elections, with the latest in 2015, when Lalu Prasad and Nitish Kumar came together and the BJP lost.