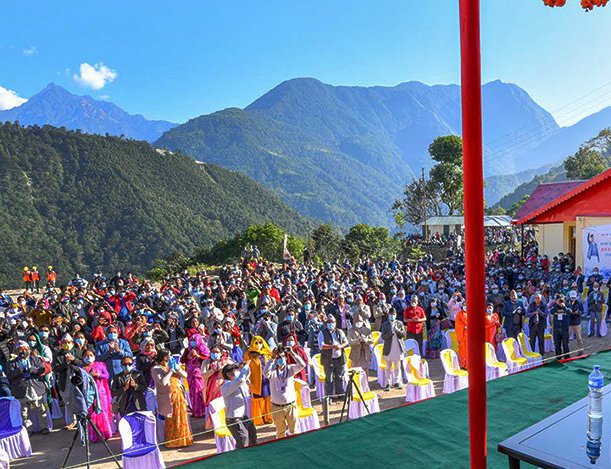 Prime Minister KP Sharma Oli carried out onsite visit of Kimathanka check point and North-South highway on Wednesday. On the occasion, he expressed belief that the two would be connected with each other soon reports RSS.

According to RSS, the Prime Minister shared that responsibility has already been given to Nepali Army to open the track at Kimathanka, adding that Kimathanka would become very close after construction of North-South Koshi road section.

Oli reiterated that he would not tender resignation from the post of prime minister as he has become the head of the government to establish stability after being elected by the people.

Prime Minister Oli urged all not to run after the rumor of split in Nepal Communist Party, arguing that a rumor has been spread regarding the party split in recent period says RSS.

The Prime Minister said that he was satisfied with the construction activities of Arun III Hydropower Project. PM Oli had carried out aerial inspection of Pukhuwa, the power house construction site of the project and dam construction area.

On the occasion, Chief Executive of the Arun III hydel project Arun Dhiman shared that round-the-clock work was being done with the help of 2,400 workers. Three assistant tunnels and the diversion tunnel to reach the power house from dam site have already been constructed.

According to the Project Development Agreement, the 900 MW capacity project is expected to be completed by 2022.The total cost of the project is Rs. One 144 billion, with Nepal getting 21.9 per cent of the power free of cost.

Likewise, the locals affected by the project receive shares worth 1.06 billion rupees and 30 unit power per month. The project has to be handed over to Government of Nepal after 25 years of completion of the project.

Prime Minister Oli was accompanied by Minister for Physical Infrastructure and Transport Basant Nembang, Chief Minister of State-1 Sherdhan Rai, parliamentarians and other leaders in the onsite inspection.