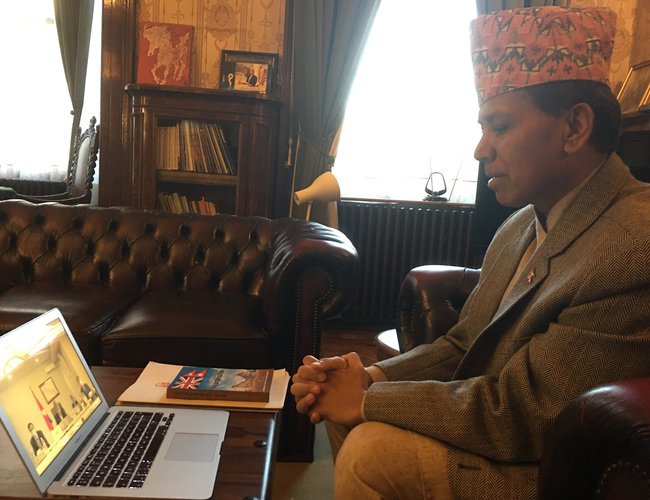 The fifth meeting of Nepal-United Kingdom Bilateral Consultation Mechanism (BCM) concluded today by discussing a wide range of matters relating to bilateral relations and issues of mutual interest. The meeting took stock of overall state of cooperation between Nepal and the United Kingdom ata cordial and participatory atmosphere.

The delegations of both the Governments exchanged views on over two centuries-old friendship and cooperation, and reviewed the progress made in various aspects of the bilateral ties, including development cooperation, the British Gurkha matters, cultural relations, people-to-people contacts and educational cooperation.

Developments on political and economic fronts in both the countries as well as their national experiences in fight against the COVID-19 pandemic were also shared during the meeting. In this context, Nepal thanked the British Government for its cooperation in Nepal’s fight against the pandemic, while appreciating the progress made in the development of vaccine.The two sides agreed to work closely towards further consolidating and widening cooperation and engagements in productive sectors such as trade, investment, energy and tourism, among others.

Matters of regional and global importance also figured in the meeting. The two Governments renewed their commitment to collaborating on various matters of common interest at multilateral forums. Both sides will work together to advance the agenda of addressing the impacts of climate change with their substantive engagements in the COP26 as well as in Sagarmatha Sambaad.

The Ministry of Foreign Affairs, the convener of the Nepali side, was joined by senior officials of the Office of Prime Minister and Council of Ministers and relevant line ministries. The British delegation was led by the Foreign, Commonwealth and Development Office. The Ambassador of Nepal to the UK and the British Ambassador to Nepal were also part of their respective country delegations.

Nepal Army Collects Over 30,000 KG Of Wastes From Major Mountains By Agencies 14 hours, 39 minutes ago