Although RAW chief visited as a special envoy of Indian PM Modi, PM Oli’s efforts to cover up his visit as a secret has sent ruling Nepal Communist Party into a new political turmoil 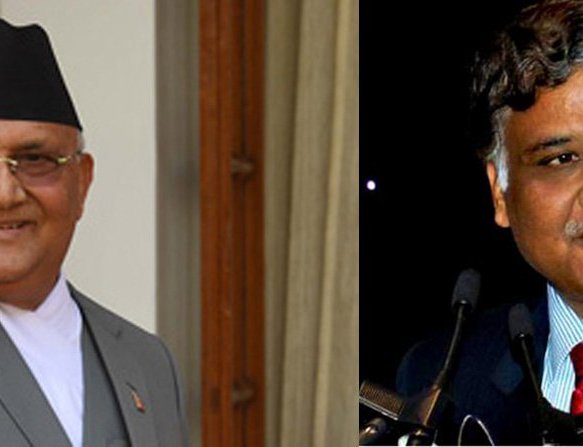 As American scholar late Leo Rose says, “It is a normal phenomenon for the foreign policy of any society to be strongly affected by domestic political and economic factors, and this is certainly the case in Nepal. But the reverse, principle-namely that international factors have a strong and often decisive impact on Kathmandu’s domestic politics-is even more apparent. This is a painful fact for many Nepalis.”

As it was written in a book by late Rose almost half a century ago, Nepal’s internal politics is still affected by external political factors. Nepalese have been experiencing how strongly external factors have affected Nepal over the last 15 years.

The political uproar within the ruling Nepal Community Party following a recent visit of Chief of Research and Analysis Wing (RAW) — the foreign intelligence agency of India, Samant Goel is not a new one.

The only question is why Prime Minister K.P. Sharma Oli and leaders of his group, including ministers, did not make public the visit and meeting for a day.

According to Thapa, press advisor to the PM, discussions regarding preserving the friendly ties between the two nations were held in the meeting between PM Oli and RAW chief Goel.

According to foreign minister Pradeep Kumar Gyawali, in an interview with Kantipur (25 October), Goel paid an official visit to Nepal as a special envoy of Prime Minister of India Narendra Modi.

Foreign Minister Gyawali also confirmed that he paid a courtesy call to Prime Minister Oli at his residence and exchanged views to bring Nepal-India relations back on track.

Thriving on anti-India plank, Prime Minister Oli and his whole team tried to cover up the entire meeting and content of discussions to protect Oli’s anti-Indian and ultra-nationalist image.

A political event is moving fast. Prachanda and Nepal’s group is reportedly preparing to table a no-trust motion against K.P. Sharma Oli in the parliamentary party.

DPM Pokharel even accused Prachanda and Nepal of expressing doubt about the meeting. He said Oli is not the first prime minister to hold a meeting with a RAW chief arguing that it is as per the diplomatic norms to meet an envoy of a neighboring country.

However, Prachanda, Nepal, Rawal and Shrestha questioned the timing of the secret visit and meeting with prime minister Oli, who projected himself as a strong anti-Indian and nationalist politician.

They suspected that PM Oli might have negotiated with India seeking support to diffuse internal bickering in the party in his favor. “If Prime Minister Oli is honest, he should have publicly announced the visit and meeting the same day. There are adequate reasons to suspect PM Oli,” said Shrestha.

Despite the defense by Pokharel and Gyawali, the one-to-one meeting between Indian Intelligence chief Goel and PM Oli has sparked a major row within the ruling party.

At a time when there are widening differences between PM Oli, Prachanda and Nepal found the meeting to hit back PM Oli’s anti-India stand. PM Oli often blamed his rivals for playing against his anti-Indian stand and terming them anti-national.

They suspected that PM Oli might have compromised the national agenda including the recent border dispute with India for the sake of power. However, DPM Pokharel and Minister Gyawali said that PM Oli expressed his strong stand on Kalapani and Limpuyadhura.

Sent by Indian Prime Minister Modi as a special envoy to mend the relations with PM Oli and Nepal, the visit of RAW chief Goel has created more controversy within ruling NCP and disenchantments against India than before.

Nepal’s leading media expressed their dislike over the visit of RAW’s chief as a special envoy. They argued that the Indian political establishment degraded Nepal’s status.

Situated between two big powers India and China, Nepal’s internal turmoil and crisis are often outcomes of external factors. Although some find it difficult to accept the fact, external factors always play a decisive role in Nepal.

Since the signing of 12-point agreement between the seven-party alliance and Maoist against monarchy with tacit support from India, Nepal has seen many historic transformations and political upheaval.

Although the existing political experiment is a part of India-backed compromise, India has been facing a more hostile situation following the change. As a backer of the 12-point agreement, India stands as a silent spectator dismantling religious, cultural and political institutions that have civilization linkages with it.

Although people and institutions in power are the creation of that agreement, they are nourishing more anti-Indian sentiment in Nepal. Starting from the promulgation of the new constitution to general elections and till the publication of a new map including disputed territory, Nepal-India relations have gone through many ups and downs with no sign of compromise.

As the political leaders, who are in the political main statement are playing a dubious role for the sake of their individual political gain, Nepal-India relations, which has historical, religious and civilization connections, has been suffering.

As Nepal-India is close to countries in terms of religion, culture, geography and civilization, it is natural to see some frictions. During the monarchical period, Nepal’s monarch had firm views on its common civilization and its linkage.

“Relations between Nepal and India are nurtured and enriched by the noble ideals, values and principles that are common to our cultural heritage. People as inheritors of these valued traditions provide continuity infusing timelessness in our relationship,” said late King Birendra during his visit to India in 1999 during the state banquet.

India has lately realized the importance of cultural and civilization connection to revitalize its relations with Nepal. However, all the elements needed to revive the linkages including monarchy, traditional forces are no more. All those elements monarchy, Hindu religion and culture have already ruined under overgrowing communist ideology and radicalize Nepali Congress. Nepal and India have to go a long way to restore natural relations based on common civilization