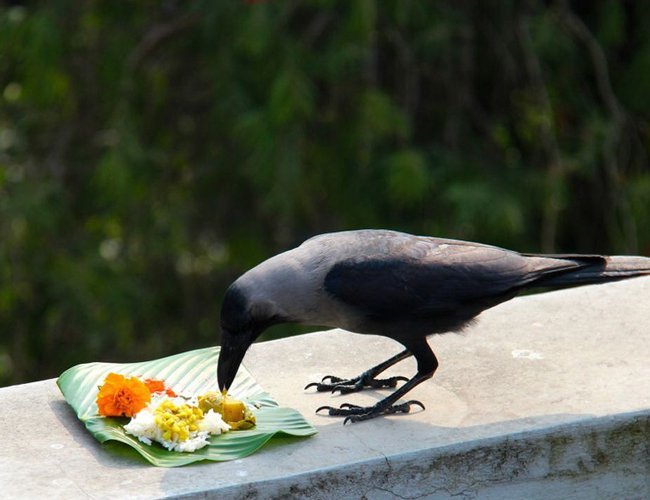 Tihar is a five-day Nepalese festival celebrated in late autumn, which comes soon after Dashain. Two of these days incorporates the Hindu festival Deepawali, where one day is celebrated for goddess Laxmi and the other one is celebrated to worship brothers for their long life. However, all ethnic groups celebrate this festival. The festival is celebrated from Trayodashi of Kartik Krishna to Katrik Shukla Dwitiya every year.The name Tihar means the festival of lights, where many candles are lit both inside and outside the houses to make it bright at night. The five-day festival is considered to be of great importance as it shows reverence to not just the humans and the Gods, but also to the animals like crow, cow and dog, who maintain an intense relationship with the humans.

The first day of the festival is called Kag Puja or Kag Parva - Worship of Crows.The crows are worshipped by offerings of sweets and dishes on the roof of the houses. The cawing of the crows symbolises sadness and grief in the Hindu mythology, so the devotees offer the crows food to avert grief and deaths in their homes.Tihar in Nepal and Diwali in India represent the divine attachment between Human and other animals and birds in our nature. To strengthen the worship of nature, all these rituals are introduced in Hinduism.

The second day is called "Kukur Puja" or "Khicha Puja" ("worship of the dogs") by the Newars.[3] Dog, which is believed to be messenger of Lord Yamaraj, the god of death, is worshiped once a year on this day. People offer garlands, teeka and delicious food to the dogs, and acknowledge the cherished relationship between humans and the dogs.

This day is also observed as Narak Chaturdashi.

On the morning of the third day is Gai Puja - the cow is sign of prosperity and wealth. In ancient times people benefitted a lot from the cow like its milk, dung even its urine was used for kind of purification. Thus on this day people showed their gratefulness to the cow by garlanding and feeding the cow with the best grass. Houses are cleaned and the doorways and windows are decorated with garlands made of marigolds and chrysanthemums. In the evening Laxmi, the goddess of wealth is thanked for all the benefits that were bestowed on the families by lighting oil lamps or candles on doorways and windows to welcome prosperity and well being. At night the girls enjoy dancing and visiting all the houses of the village with many musical instruments playing a historical game called bhailini(vailini) all night long. They collect money from all the houses by singing and dancing and share the sweets and money amongst themselves.

On the fourth day of Tihar, there are three different known pujas, depending on the people's specific cultural background. Most perform Goru Puja, or Worship of Oxen. People who follow Krishna perform Gobardhan Puja, which is worship towards Cowdung. Cowdung is seen as very useful in Nepal, as in the olden days it was used for everything from light at night (Methane) to polish for the mud floors of traditional houses. The Newar communities on the night of this day do Maha Puja, or Worship of Self. Because this period is also the beginning of Nepal Sambat, or the New Year of Nepalese especially commemorated by Newars, it ensures prosperity for the New Year.

The third and fourth day of Tihar is especially famous for Deusi and Bhailo, light and fireworks. Deusi and Bhailo are the songs which have only been sung on those Tihar days. Social workers, young and children visit local homes to sing these songs, and in return the home owners give them money, fruit, rice and bread (Selroti, a special type of bread made by rice flour and sugar). The Deusi is mostly sung by the boys while the Bhailo is sung by the girls.

The fifth and last day of Tihar is Bhai Tika, a day where sisters put "tika" on foreheads of brothers, to ensure long life, and thank them for the protection they give. When the sisters give the "Tika", the brothers give gifts or money in return. A special garland is made for the brothers out of a flower that wilts after a couple of months, symbolizing the sister's prayer for her brother's long life.

There are various stories about the celebration of Tihar. One of the famous stories behind the celebration of tihar is related to Yama the god of death and his sister Yamuna. Yama had been staying away from his sister for a long time. His sister wanted to meet him so she asked various sources to visit him and ask him to give her a visit. She sent crow, dog, and cow and at the end she went herself to see her brother. She worshipped him with tika and flowers, she put him five colored tika. Yamuna made a circle with mustard oil, Dubo Grass (Cynodon Dactylon) and put Makhmali Mala (Globe Amaranth) and asked Yamaraj not to go till the oil, Dubo Grass and the flower gets dry. Therefore, every sister worships her brother keeping him in the circle of mustard oil, putting mala (garland) of Makhmali flower and Dubo grass.

The second day of tihar is dedicated to the most loyal friend of mankind. Kukur, the dog, Puja is done by putting a red tika on dogs forehead and flower garland around the neck offering him foods and sel roti. Generally male dogs are worshiped. It is said dog can see endangers and the death coming.

On the third day of tihar Cows are worshipped in the morning. Cows are worshipped with sesame oil light, garland of flower and red color (abir). Wheat flour, sel roti, rice and dal are feed to cows. Disciples try to pass in-between four legs of the cow. Cow is regarded as mother in Hindu religion, as we grow up drinking her milk. Some look cow as Goddess Lakshmi, the goddess of wealth and prosperity.

In the afternoon we clean our houses, paint floors with Red Mud (Rato Mato) and cow dung (gobar). Small circle are made in front of the main gate and decorated with colorful designs. Some people call it rangoli.

Small designs of footsteps are painted from the main entrance to the puja kotha. These footsteps are believed to be the footsteps of goddess Lakshmi. Candles or pala are lit all over the house making it bright and beautiful.

There is a long tradition of going housed in the evening singing songs to ask for money and foods. Generally girls and kids go out to neighbors sing traditional songs called Bhailo songs. The tradition is called “Bhailo” and songs are called Bhailini songs.

Fire crackers are blown in this day. People play cards in Laxmi puja to welcome goddess Laxmi in the night. People believe, laxmi comes to the house which is clean and bright.

In the evening the goddess of wealth Lakshmi is worshiped by lighting numerous lights and lightening works. It is believed that by worshiping Laxmi and pleasing her in return she gives us wealth. People worship wealth and food store this day.

Fourth day – Goru Tihar (Govardhan parbat ko puja) and Mah (aatma or self) Puja: On Govardhan puja Goru Tihar, three different Kinds of puja are performed. We perform Goru Puja, or worship Oxen. We also perform Govardhan Puja, which is done by making a hill of govardhan parbat using Cow dung. Cow dung has big importance in Hindu culture. In the old days it was used for everything from light at night (Methane) to polish mud floors of traditional houses. Still now no Puja is complete without cow dung in Nepali Hindu culture.

In this night Newar community perform Maha Puja also known as self-puja. It is done to purify our body. In this puja a Mandap decorated with Saipatri (marigold flower), sweets and fruits and a special Mala (garland) which is made of thread is kept. Each member of the family has one Mandap. A female member of the family offers the person sitting on the Mandap a Sagun with her hands crossed. Shagun usually consist of fried eggs, fruits, sweets, meat, fish, lentil and pastries. In the left hand with egg and fish and in the right hand Rakshi (homemade alcohol). This day is also the beginning of Nepal Sambat, Newari New year.

In the evening many Nepali children and young men go house to house singing Deusi song (Aahai bhana mera bhai ho deusi re bhana na bhana deusere). Deusi is very similar to Bhailo. Bhailo is primarily for female and Deusi for male. However, now a days there is such distinction. People go in group with males and females members to celebrate Bhailo and deusi both.

The fifth and last day of Tihar is Bhai Tika. This day sisters put “Tika of five colours” Paanch Rangi Tika – Yellow, green, red, blue and white on forehead of her brothers, to ensure long life and pray to Yamraja for her brother’s long life and prosperity. Sister offers brothers Shaguns of dry fruits especially walnut, hazelnut (Katus), fruits and sweets and in return the brothers give their sisters gifts and money. The brothers also put Pancha Rangi Tika to sister and bow her on her feet and assure her to protect her till the end of life.

On this day, Rani Pokhari Temple (located at central Kathmandu) is opened for those who do not have any brother or sister. This is the only time in a year the temple is open to general public.