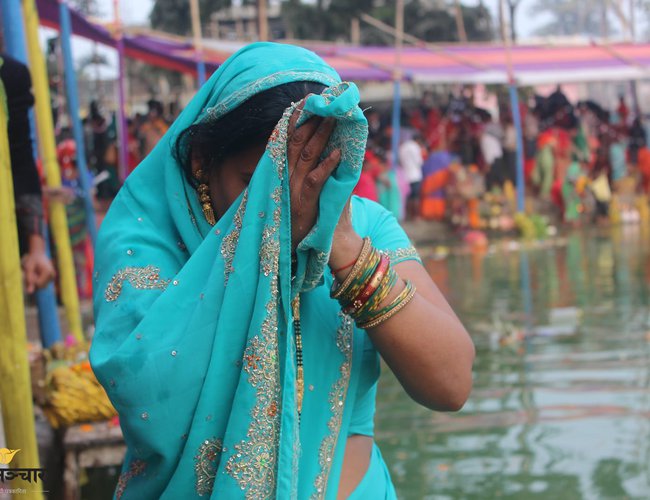 Chhath puja is a Hindu Vedic festival dedicated to the sun god (Lord Surya) and chhathi Maiya. It is an important festival of Nepal, Indian states of Bihar Jharkhand, Odisha, Uttar Pradesh, and West Bengal.

Chhath puja is also called Chhathi, Chhath Parv, Dala, Chhath Dala Puja, and Surya Shashthi. During this festival women of the house observe fast and pray for the wellbeing of their children and family.

Chhath puja is celebrated 6 days after Diwali on sukhla paksha sasthi of Kartik month. In 2020 it falls on Friday, 20 November. Actually, the rituals of Chhath Puja are observed over a period of four days. The 4 days holy festival of Chhath starts with Nahay-Khay from Wednesday, 18 November 2020.

Chhath puja is celebrated 6 days after Diwali on sukhla paksha sasthi of Kartik month. It is an important festival of Bihar; and also observed in Jharkhand, Odisha, Uttar Pradesh and West Bengal as well as the Madhesh region of Nepal. Let's know about the rituals to be performed on 4 days of chhath puja.

How to Do Chhath Puja?

The Puja Ceremonies and rituals of this festival are begun on Nahay khay - the first day of Chhath. People gather on the Chhath Ghats to express their gratitude and devotion towards the Lord Surya. People come a long way before sunrise one day before the celebration and take both to rouse themselves in its pious water. They perform various rituals and customs by offering water to Sun as this celebration is a thanksgiving celebration which is fundamentally wholehearted to the SUN God-Lord Surya.

Chhath Puja begins from the Nahay-Khay. After bathing in the morning, the vrati women clean the grain for the puja material and dry it by covering it in the sun. Cleanliness is taken care of during the washing and drying of grains. After this, women take bath once again. From this day, not only the vrati women but also their families start taking satvik food. Kaddu Bhaat along with Channa dal is a common preparation on this day and it is cooked by using mud or bronze utensils and mango wood over a mud stove. After worship, all the observers are eaten only once a day. After eating the food sometime mid-noon, vrati starts the waterless-fast which is broken only the next day evening while observing 'Kharna' the second day of Chhath Puja.

Then they go to a holy water body like the river Ganga and take a bath.

Some of the holy water is brought home.

With that water, Prasad for Lord Surya is prepared.

In the entire day, people eat only before Surya udaya in the morning.

After having food water is consumed only once.

This fast is observed for 36 hours from then.

The fast does not even permit water hence is known as ‘Nirjal’.

The second day of Chhath puja is known as Kharna. On Kharna, devotees observe Vrat for a time period of almost 8 to 12 hours. On this day devotees keeps fast for whole day and break their fast in the evening after sunset after the worship of Sun. People terminate the fast during evening after performing Surya Puja. They offer Rasiao-kheer, puris, fruits in the puja.

The fasting continues this day till it completes 36 Hours.

In the evening Chati Maiyya is worshipped.

The Prasad from the puja is consumed to break the fast.

The Prasad prepared is usually Puri and Gud ka Kheer.

Salt is not at all consumed on this day.

The third day of Chhath puja rituals is known as Sandhya Arghya. On this day, after preparing the prasad, devotees take a dip in the holy water body in the evening and worship the Sun god and chhathi maiya. They offer the evening offerings amid folk songs.

This day basically observes the worship of the Sun in the morning when it rises. It is also known Bihaniya or Bhorwa Ghat (Morning Arghya).

In the early morning, devotees along with their family and friends offer Bihaniya Aragh at the ghat of the riverbank of Ganga or any other holy water body.

This is the last or you can say the final day of this auspicious festival.

The devotees gather at the bank of the river with their family and friends to offer bhorwa arghya to the rising Sun.

The people who were fasting break the fast by taking the blessings of the elders and then eating ginger with water.

The other Prasad prepared are then consumed by them.

This is the most important part of the ritual. During the festival, the female folks spend their night by singing traditional Chhath songs.

There is also a tradition of “Dandwat Pranam” during Chhath Puja. People who have wished or wish to succeed in something, take an oath to go to the Chhath Ghat by lying and saluting on the ground in simple cloth. With the help of a “Kanda” a type of stick easily found in the locality or in fields, the devotee draws a round line by lying on the ground with the help of the stomach and stretching both hands in “Pranaam Mudra”. After arriving on the Ghat after “Dand” the devotee takes a bath in the holy river and worships Chatti Maiyya.

The fast come to end after offering argha and Surya Namaskar to the rising sun. Everybody comes together to have Prasad and family bonds and feels rooted more than ever. The most auspicious part of the ritual is to prepare delicacies for the ‘Vrattis’ (devotees that fast) and the female folks spend their whole night by singing traditional Chhath songs, during the fourth day of the festival like-

Devotees reach on the Ghats along with their family members and relatives on the final day and offer bhorwa arghya (morning offerings) to the rising Sun. At the Ghats, Devotees bend down on their knees to worship Chaithhi Maya after Arghya (Offerings). They also distribute Thekua and then break their fasts after reaching home.

The origin of Chhath Puja is not clear and ambiguous. It is believed to be originated from Vedas, Epic Mahabharata and Ramayana. It was also believed that, it has Legend of King named Priyabrat and his wife Malini blessed with a beautiful baby boy and they started worshiping Chhathi Maiya and celebrating Chhath Puja.

It is the story of a king named Priyabrat and his wife Malini. Both are living happily, but have no child. They decided on Maha Yagya with the help of Maharishi Kashyap. King’s wife Malini got pregnant and delivered a dead child. With this the king loses hope of decided to give his life, suddenly, the Manas Kanya (Devsena) appeared and said “I am Goddess Khashti and I’m an incarnation of the sixth part of the universe. If you worship me with pure mind and soul for six days, you would definitely be blessed with a child” The King and Queen agreed to worship and after they are blessed with a beautiful baby boy.

It believes that it is originated from the ancient Vedas – Rigvedas contains hymns of worshiping the God Sun and describe the ritual and exemplifies similar Costumes. It describes the stringent worshiping of God Sun and frugality and abstinence Rituals. Chhaiti Maiya is also worship and knows as USHA in the Vedas, believe to be younger wife of the Surya, the Sun God.

This ritual also referred in the Sanskrit Epic poem in which Draupadi is described with observing the ritual similar to Chhath Puja today. During the exile in the forest of the Pandavas, Draupadi started crying as Pandavas were in misery. To get solution of their misery, Yuddhisthira went to Dhoumya.

Sage Dhoumya gave the solution and explained that “the Food grain are the form of the Sun god that helps I maintaining the life on the earth. Therefore, the Sum god is their father. The people who worship the sun god on the sixth and seventh day of fortnight of Shukla Paksha in Karthik Mas with pure hearth and Chant the 108 names of Lord Surya will blessed with son, gems, wealth and wisdom and bring prosperity.

After enlightened and recommendation by Sage Dhoumya, Yudhisthira started worshipping Lord Sun and pleased him. Pleased by his devotions, Lord Sun appeared in front of Yudhisthira and gave him a magical copper vessel. Lord Sun told that this vessel would cook four types of food for them and will last till Draupadi, the wife of five Pandavas took her meal. This way, Pandavas came out of their trobles and also help in re-gain their kingdoms. Hence, it is believed that by worshipping Bhagwan Surya during Chhath Puja, one can fulfill all their desires and come out of all pain and suffering.

Also, In Mahabharat, karan, the son of Kunti and God Surya do daily worship of his father Sun and special puja during the month of Kartik in Shukla Paksha. Karan is also a King of Aang (Now known as Bhagalpur in Bihar). People living in that part of Bihar also start worshipping lord Sun.

The yogic or scientific history of Chhath Puja dates back to the Vedic times. The rishis of yesteryears used this method to remain alive without any external intake of food and were able to obtain energy from the sunlight. This was done through the rituals of the Chhath Puja.

In Ramayana, It is believed that after Completion of Banwas (Exile) of 14 Years, Lord Rama & Mata Sita had kept fast together and offered puja to the Lord Surya (The Sun God) in the month of Kartik (in between October and December) in Shukla Paksha. Since then Chhath Puja became an important and traditional festival in the Hindu religion, 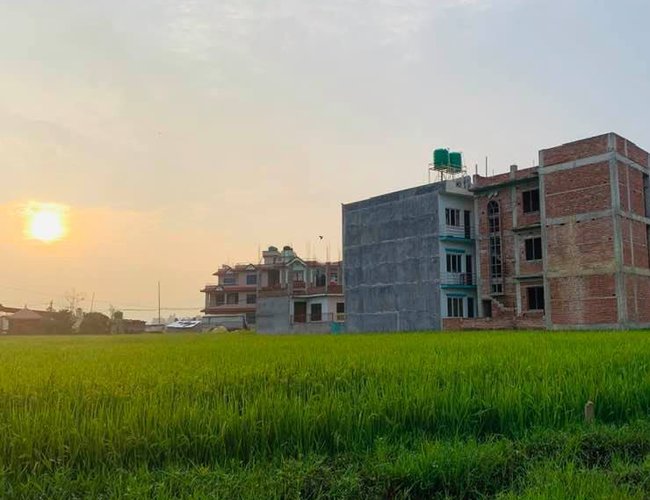