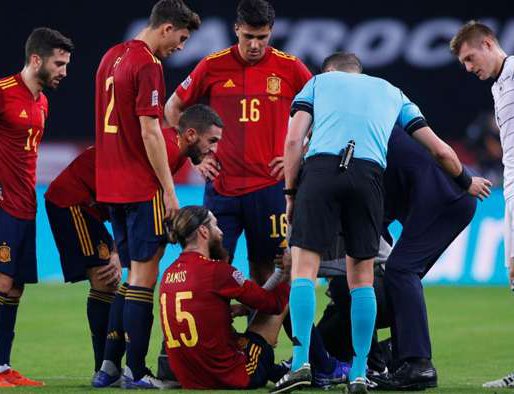 Sergio Ramos is set to miss a trio of games for Real Madrid but the Spanish champions will be left relieved that their captain is not set for a longer lay-off after he pulled up in Spain's Nations League victory over Germany.Goal

The veteran centre-back, who skippers both Los Blancos and La Roja, was forced off in the first half of Tuesday's 6-0 drubbing of the visitors in Seville, raising concerns that he could be set for a prolonged spell on the sidelines.

The 34-year-old was able to leave the field under his own steam, making way for Eric Garcia just before the break at Estadio La Cartuja, but his premature exit stoked fears that Madrid would be forced to do without their stalwart defender for the foreseeable future.

The club has now confirmed that Ramos has suffered a hamstring injury in his right leg, and that he will certainly miss upcoming clashes in La Liga with Villarreal and Alaves, as well as a Champions League tie with Inter sandwiched in-between domestic commitments.

"After the tests carried out today on our player Sergio Ramos by the Real Madrid Medical Services, he has been diagnosed with an injury to the biceps femoris in his right leg," Madrid revealed in an official statement.

Though the club is yet to provide a further timeframe beyond that, stating that the former Sevilla man is awaiting further tests, the lack of a further timeline suggests a hope that the player will be able to figure in Zinedine Zidane's plans for December's trip to Shakhtar Donetsk.

Ramos has started every league game for Madrid so far this season, forming the core of their defense as they look to defend their crown, with Saturday's trip to Villarreal offering a chance for the club to reset following a 4-1 defeat to Valencia heading into the international break.

The centre-back had also been in fine form for Luis Enrique's national squad, extending his own record as the most-capped player in Spain history while helping the 2010 World Cup winners to their maiden Nations League finals with victory over holders Portugal.