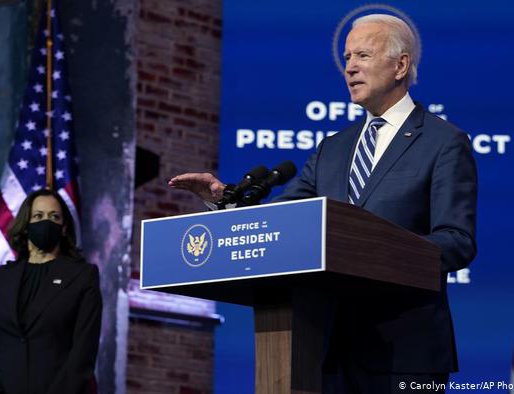 US President-elect Joe Biden's narrow victory in Georgia has been officially certified by Republican Secretary of State Brad Raffensperger.

It comes as legal efforts by Donald Trump's allies to challenge his defeat were dismissed in three other states.

The Democrat beat his Republican rival in Georgia by 12,670 votes, according to the audit required by state law.

Mr Raffensperger on Friday said he was disappointed that his party lost but that "numbers don't lie".

Mr Biden is set to take office in January as the 46th US president.

Mr Biden's victory margin in the public vote overall stands at more than 5.9 million. His victory in the US Electoral College system, which determines who becomes president, is projected to be 306 to 232 - far above the 270 he needs to win.

Why Republicans are fighting in Georgia

Mr Trump has so far refused to concede and has made allegations of widespread electoral fraud, without providing any evidence.

The latest defeat comes as he has summoned Michigan state lawmakers to the White House on Friday ahead of that state's deadline to certify election results.

White House spokeswoman Kayleigh McEnany denied that Mr Trump was holding a campaign "advocacy meeting" with the lawmakers, saying it was instead a routine check-in with local officials.

Also on Friday, Mr Trump gave a briefing from the White House on drug pricing, where he again falsely claimed to have won the election. In his first public appearance in a week, he took no questions and seemed to imply he knew another administration would take over soon.

"There will never be anything like this. I just hope they keep it," he said touting new rules aimed as reducing prescription drug costs.

What happened in Georgia?

Mr Raffensperger said on Friday that the result had been certified, posting the result to the secretary of state's website.

On Thursday, Mr Raffensperger - who oversees the election process - said the hand audit of ballots had not altered Mr Biden's victory in the state.

On Friday, the self-proclaimed Trump supporter went on to say: "Like other Republicans. I'm disappointed, our candidate didn't win Georgia's electoral votes.

"I live by the motto that numbers don't lie. As secretary of state, I believe that the numbers that we have presented today are correct."

The Democrats' victory is their first in a presidential race in Georgia since Bill Clinton was elected in 1992.

The recount found the error rate was no greater than 0.73% in any county and Mr Biden's margin of victory over Mr Trump remained at under 0.5%. The results will be certified on Friday.

Trump campaign senior legal adviser Jenna Ellis said the audit had gone "exactly as we expected" because, she said without evidence, the state had recounted illegal ballots.

But Gabriel Sterling, a Republican who serves as Georgia's voting system implementation manager, told CNN on Thursday: "One of the big complaints is these machines somehow flipped votes or changed votes or did stuff. They didn't, at least not in Georgia. We proved it."