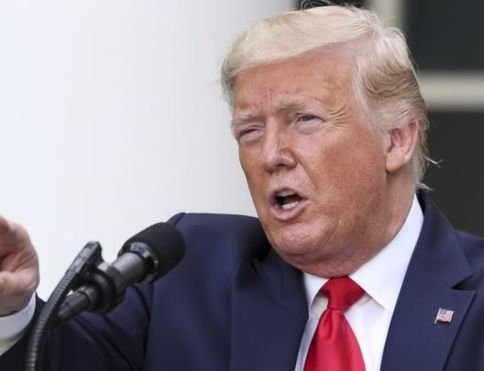 Republican officials in Michigan have written to the state's electoral board to request a two-week adjournment.

They have called for an audit of the presidential vote in the largest county, home to Detroit, after it was contested by President Donald Trump.

However, the Michigan Department of State has quickly objected to the idea, saying delays and audits are not permitted by law.

Democrat Joe Biden was projected as the state's winner earlier this month.

The Michigan electoral board, made up of two Democrats and two Republicans, is set to meet on Monday and certify election results.

Their decision has to be signed off by Michigan's secretary of state and then the governor, both Democrats and so unlikely to support any changes, without substantiated reasoning.

The state department has called claims of widespread fraud, repeated by President Trump and the local Republicans, "wholly meritless".

Mr Trump took the unusual step of meeting members of the Michigan state legislature's Republican leadership at the White House on Friday, reportedly putting pressure on them to disregard Mr Biden's win in the state.

The White House said earlier it was "not an advocacy meeting" and simply part of the president's routine meetings with state lawmakers across the country, although he has conducted very few engagements since the election.

Afterwards two Republican legislators pledged to follow "normal process" in validating the vote, saying they haven't seen any evidence that would change the result.

Yet, in the letter on Saturday, the Michigan Republican Party called for the full audit of votes in Wayne County, where the majority-black city of Detroit heavily leans Democrat.

The letter, signed by Republican National Committee Chairwoman Ronna McDaniel and Michigan Republican Party head Laura Cox, cited allegations of "irregularities" in the county, which have not been substantiated.

The Republican president has refused to recognise the overall national win by his Democratic rival, Joe Biden, who is now the president-elect and is set to take over on 20 January.

The normal transition process has been derailed by Mr Trump's hold-out, with Mr Biden unable to get hold of office space, funding and staff to ease him into position, because a Trump appointee has not confirmed him as the election winner.

On Saturday, social media company Twitter confirmed it would hand over control of the official presidential account (@Potus) to Mr Biden on 20 January. Mr Trump mostly tweets from his personal account, and Twitter has implied that his access to this account could be restricted when he becomes a private citizen again, if he breaks their rules.

Why is election certification important?

When Americans vote in a presidential election, they are actually voting in a state contest, not a national one.

They are voting for state electors who will then cast one vote each for president. These electors usually follow the will of the electorate - in Michigan, for instance, they should all vote for Joe Biden because he won the state.

The states get a varying number of votes, equivalent to the number of their representatives in the US Congress - the House and the Senate.

What is the electoral college?

Mr Biden's victory is projected to have reached a total of 306, as opposed to Mr Trump's 232, which is far above the 270 he needs to win. Mr Biden's lead in the public vote overall stands at more than 5.9 million.

What is typically a mere formality during normal elections - the bipartisan certification of state vote totals - has become the latest battleground in the president's attempts to maintain power for the next four years.

Could Trump actually be successful? It's not impossible, but the chances are very, very slim. First of all, the president would have to overturn the results in multiple states, where Biden's leads range from tens of thousands of votes to more than a hundred thousand. This isn't 2000, when everything came down just to Florida.

What's more, many of the states Trump's legal team is targeting - Michigan, Wisconsin, Pennsylvania and Nevada - have Democratic governors who are not going to sit idly by while all of this takes place.

That doesn't mean Biden's supporters aren't worried, however. While the odds of this happening are along the lines of the earth being hit by a giant meteor or someone getting struck by lightning while winning the lottery, having victory snatched away at this point would be such a cataclysmic political event that the remote prospect of such a possibility is enough to give Democrats cold sweats.

What is the president's next move?

After a string of court defeats in his efforts to challenge the election results, Mr Trump's team is hoping to convince legislatures controlled by his fellow Republicans in key states to ignore the outcome and declare Mr Trump the victor, according to multiple US media outlets.

Mr Trump has also expressed interest in inviting legislators from Pennsylvania, another battleground won by Mr Biden, to the White House, a senior campaign official confirmed to the BBC's US partner, CBS News.

But he has no such meetings currently listed on his public schedule for this weekend, and counties in the Rust Belt state, along with Michigan, are due to certify their vote totals on Monday.

It is seen as highly unlikely that the president's team would be able to flip Michigan and Pennsylvania.