KLF Hosts a Dedicated Session on Gurkhas, Atul K. Thakur will be in Conversation with Tim I. Gurung 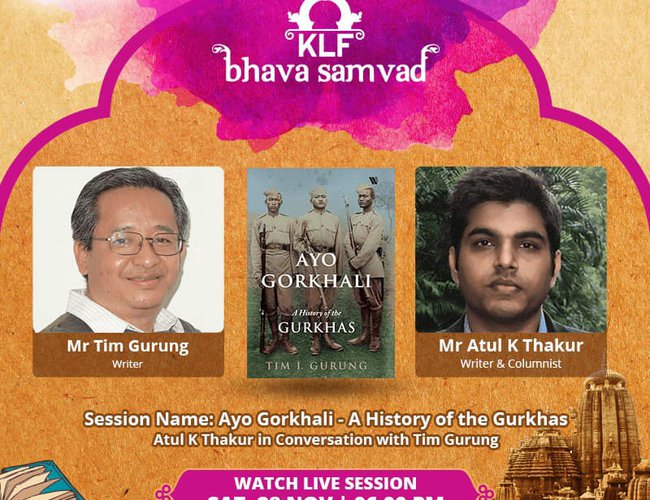 One of the greater known histories of the globe about Gurkhas will be glorified when writer and author of the book 'Ayo Gorkhali-A History Of The Gurkhas' Tim I. Gurung will be seen in conversation with the writer and Kathmandu Post columnist Atul K Thakur during the Bhava Samvad of Kalinga Literary Festival (KLF). The session will be live on KLF’s official Facebook, Twitter and YouTube on 28th November at 6 pm IST.

The book dwells with the Gurkhas of Nepal in historical perspectives, it also goes deep down to tell the story of Gurkha veterans who fought the deadly wars being parts of Nepali, Indian and British armies. The author should be credited for writing a complete book about the Gurkhas that starts with the tiny kingdom of Gurkha and its rise under the ruler Prithvi Narayan Shah in 18th century. Over the next few decades, his Gurkhali army established a mighty kingdom, the borders of which extend from Kangra in the west to the Teesta river in the east. The territory encompasses a large part of present-day Himachal Pradesh, Uttarakhand and almost all of present-day Nepal and Sikkim.

When they were eventually reined in by the mighty British army in 1815, it sparked off a new engagement between the imperial power and Nepal. Impressed by the fighting abilities on display, the British army begins recruiting them. The Gurkhas went on to serve with distinction in many theatres of war over the next hundred-odd years, their exploits in World War-I and II earned them a number of bravery medals.

With Indian independence in 1947 comes further change: the Gurkhas are now split across three armies: the British, Indian and the Nepalese.

“Ayo Gorkhali” by Tim I. Gurung, a former British Gurkha, is the first work of history by a member of the community that brings alive the story of a people who have served flags other than their own with honor, even as they have attempted to keep their native warrior traditions alive in letter and spirit.

The history of the Gurkha serviceman is one that goes beyond soldiering and bravery—it is in equal measure a story of the resilient human spirit, and of a tiny community that carved for itself a niche in world history.

Author Tim I. Gurung was born in 1962 in a Gurung village called Dhampus in mid-western Nepal. He joined the British Gurkhas at the young age of seventeen, as his grandfathers and uncles did before him. He served for thirteen years and retired in 1993 as an Army Corporal, after which he became a businessman and worked in China for the next twenty years. Before his fiftieth birthday, Tim made a life-changing decision and became a full-time writer and has since written fifteen novels. He currently lives in Hong Kong with his family.