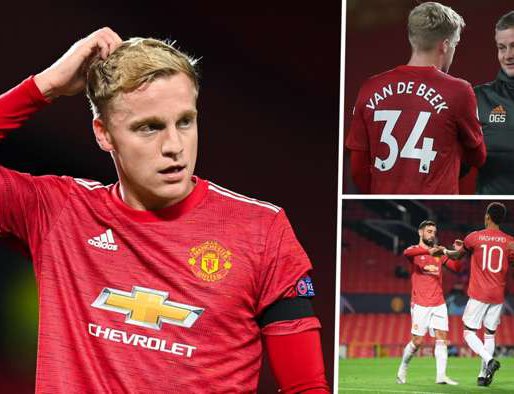 Ole Gunnar Solskjaer sent a rallying cry to his players in his programme notes that Manchester United could ill afford a repeat of the shambles of Istanbul at Old Trafford on Tuesday night.

But the Norwegian need not have worried.

The Champions League is where his players appear to feel most comfortable. While they’ve struggled at Old Trafford in the Premier League, winning just once there so far this season, they are a different animal in home games in European competition, following up a 5-0 demolition of RB Leipzig with this 4-1 rout of Istanbul Basaksehir.

Significantly, Solskjaer only needed to make two changes to completely alter the dynamic of the team had turned in a "below-par" performance in defeating West Brom 1-0 on Saturday.

Donny van de Beek and Edinson Cavani, who was making his first start for the club, came in for Nemanja Matic and Juan Mata and it was remarkable to witness their combined effect on the fluidity of United’s attack.

Where the hosts were laboured and lethargic against West Brom, they were full of vigour against Basaksehir, as they made it three wins out of four in Group H.

Deft touches from Cavani brought class back to United’s front line but it was Van de Beek who really stole the show.

The summer signing from Ajax was making just his fifth start in all competitions, having had to settle for a reserve role to date, but he was the glue that held everything together.

Solskjaer has been repeatedly asked why the Dutchman doesn’t get more game time and, after another impressive display, there will be a clamour for Van de Beek to retain his spot in midfield when United travel to St Mary’s on Sunday to face Southampton.

He is far more progressive than Matic, while his vision and effective passing between the lines can link up attacks in a way that his team-mate cannot.

While Van van Beek deserves enormous credit for pulling the strings in midfield, it would be remiss not to mention Bruno Fernandes, who was once again decisive.

It says everything about his performances since he joined United that scoring a brace is classed as a normal evening's work for the 26-year-old. Still, even by his high standards, his first goal was outstanding.

'Football is nothing without fans’ read the front cover of the match-day programme and the opener deserved to be greeted by an almighty Old Trafford roar rather than relative silence, with Fernandes smashing the ball home from the edge of the area after just seven minutes of play.

It was the Portuguese's 20th goal for the club since his debut in February and possibly his sweetest. For a player who supposedly only scores penalties, it was one hell of a strike, as he demonstrated perfect technique in hitting the ball on the bounce and leaving Mert Gunok in the Basaksehir goal with no chance.

Fernandes didn’t have to wait long for his 21st goal in a United shirt either. Gunok gift fumbled an Alex Telles cross, presenting Fernandes with to tap-in from six yards out that he was never going to pass up.

He could have had a hat-trick, too, but his selfless team ethic was highlighted 17 minutes later when he passed up a penalty, instead giving the ball to Marcus Rashford, who converted a spot-kick that he himself had earned.

It says everything about Fernandes’ importance to this side that they seemed to lose their intensity and focus once he was brought off shortly before the hour mark.

Indeed, it came as no surprised to see Deniz Turuc pull a goal back for the visitors from a free-kick in the 74th minute and, moments later, Edin Visca fired a warning sign that the Turkish side were not dead and buried yet by rattling the crossbar.

However, United, who took full advantage of the five-substitution rule in the second half, survived a late flurry of pressure and Daniel James popped up in injury time with his first goal since March to ensure they took a well-deserved three points.

Solskajer's side are top of Group H, three points clear of both Paris Saint-Germain and Leipzig. A point at home to the former would prove sufficient to secure a place in the last 16.

The focus now shifts to the weekend, though, and whether United can follow up a positive performance in Europe with one in the Premier League.