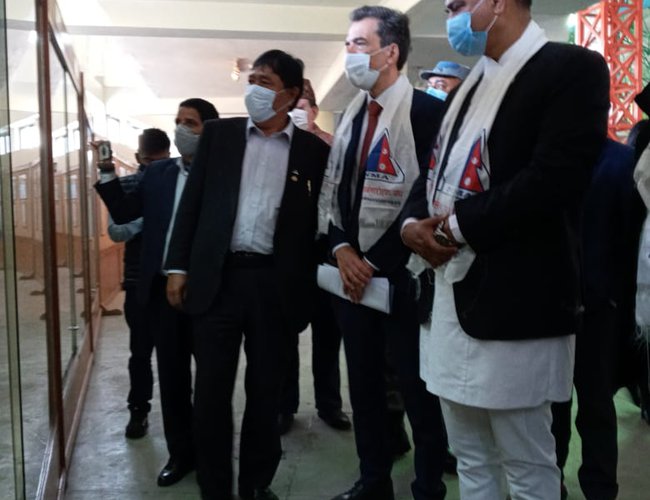 Ambassador François-Xavier Léger handed over Photos of the French climber Maurice Herzog and the first successful Annapurna ascent were handed over to the International Mountain Museum, Pokhara, earlier today in Pokhara.

Minister for Industry, Tourism, Forest and Environment of the Gandaki Province, Bikash Lamsal, and the members of the Nepal Mountaineering Association were also present during the program.

In his remarks, Ambassador Léger recollected the important contribution of Nepali Sherpas to the success of the mission and termed it a Franco-Nepali expedition. Ambassador Léger also read out a message from Elizabeth Herzog, spouse of late Maurice Herzog, in which she thanked the Nepali authorities and the museum for providing a space which is a tribute to both the Nepali and the French members of the expedition team.

On the occasion, Minister Lamsal recalled the importance of Herzog’s expedition in the development of the tourism in Nepal and how he (Herzog) helped spread the word about Annapurna and Nepal throughout the world through his book “Annapurna”.

Mrs Elizabeth Herzog from her home town Chamonix France also sends a message to the program.

“Although I would have loved to be with you all today for this important occasion but am unable to do so due to the current heath crisis. I am extremely grateful to the Nepali authorities and to the International Mountain Museum for making this exhibition possible and for providing a space. I am sure that my husband would have been very happy today to see his 1950 French expedition team be celebrated in Pokhara, 70 years after the first successful summit of an 8000m peak by him and his teammate Louis Lachenal. You know how attached my husband was to Nepal and having a space dedicated for this expedition in the International Mountain Museum means a lot to us. This is also a tribute to the Nepali Sherpas who accompanied the French expedition team. We are forever grateful to them for without their support, this ambitious mission to climb the first 8000-m would not have been possible at all,” said Mrs Elizabeth Herzog in her message.

“I and my family are very honoured by this and we would like to sincerely thank you all, and especially Ambassador François-Xavier Léger, for making this exhibition possible.”

As a French Ambassador to Nepal, it gives me immense pleasure and an honour to be here amongst you today for this important occasion.

In June 2019, Prime Minister KP Sharma OLI had visited France in 2019 and he was in Chamonix, the place of which Herzog was a Mayor and the place which has a deep connection with Nepal especially in the domain of mountaineering.

I find myself fortunate that 70 years after that famous Annapurna ascent, I am here today to be part of this inauguration where we inaugurated some pictures from that very important day in the history of the development of tourism in Nepal: 3 June 1950. This was the day when men triumphed over Annapurna and the French expedition team led by Maurice Herzog was able to successfully summit the 8000-metre peak for the first time.

As you can imagine this was not an easy feat and it required months and months of preparation and a very careful planning. Although this was a French expedition with Herzog and Louis Lachenal being the first to climb Annapurna, I would like to call it a Franco-Nepali expedition because without the invaluable help, support and local knowledge of the Nepali Sherpas, this mission would not have been successful and the outcome could have been devastating. Hence, I take this opportunity to thank and pay homage to Ang Tharkey and other Sherpas who were a vital part of the expedition team. 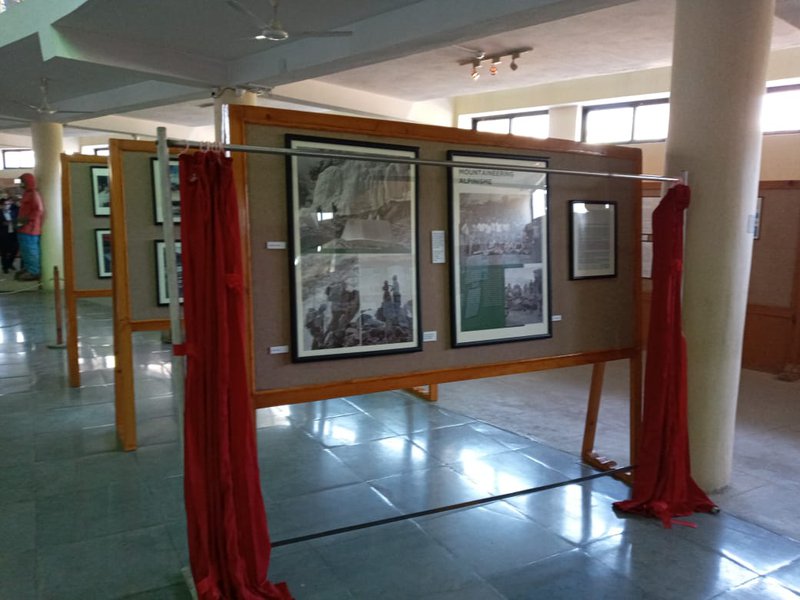 Actually we had planned this inauguration to coincide with the celebration of 70th anniversary of the ascent in June, but it was not possible due to the Covid-19 pandemic. The spouse of late Mr. Herzog was also supposed to be here with us but as you can imaging, it was not possible. Nevertheless, I do have a small message from her which I am going to read:

In conclusion, I would like to sincerely thank the Honourable Minister for their time and for being here today. I would also like to thank the Nepal Mountaineering Association and the International Mountain Museum for being a partner in this project and for providing a space for the exhibition which would benefit the Nepali and foreign visitors coming to this museum as I’m sure that these photographs and the article would make their visit more fruitful.