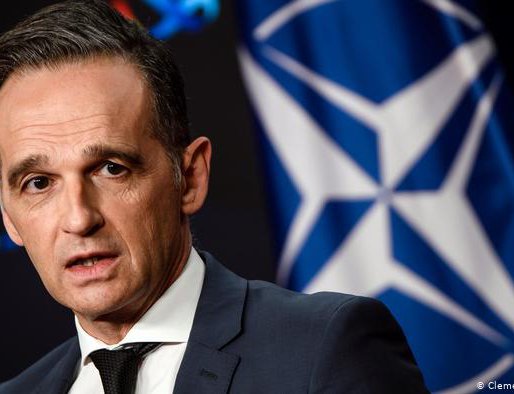 China's emergence as a global military actor must be part of NATO's discussions on how to reform the alliance, says German Foreign Minister Heiko Maas. And, amid shifting power, NATO will need a more "sovereign Europe."

It came after two days of alliance talks involving fellow foreign ministers of the 30-nation alliance.

"We have to find a well thought-out approach toward China" said Maas in a statement issued by the German Foreign Ministry.

"There would be opportunities that we can use," said Maas in a later statement, "and challenges for which we need to prepare" in coming decades.

NATO chief Jens Stoltenberg said that while China may not share NATO's values, it is not an opponent, observing that Beijing had invested heavily in new military capabilities while criticizing its human rights record.

A high-level 67-page report submitted to NATO ministers on Tuesday urged the alliance to broaden its scope beyond the Cold War and "adapt" to the rise of China and a "persistently aggressive Russia."

Based on reactions, Stoltenberg is expected to draft a plan of action to be finalized by the alliance's next summit in the second quarter of 2021.

Maas said the German cabinet's adoption of Indo-Pacific Guidelines in September would enable Germany to contribute to NATO reform discussion.

Germany's guidelines portray China, Japan, the USA and India as becoming increasingly "self-assured partners" in the Asia-Pacific sphere, necessitating cooperation," for example, on climate change and the global loss of biodiversity.

Within NATO, Europe had in recent years striven to strengthen its responsibility "urgently needed in view of the many crises in our neighborhood," said Maas, noting what he termed "the role Russia plays in Ukraine and Georgia."

NATO's foremost step, however, was to "put a stop to quarrels" among partners, Maas insisted, without specifically naming rival members such as Turkey and Greece which have argued over Cyprus and maritime mineral deposits.

On Afghanistan and NATO's mission since 2014 involving numerous alliance nations, including Germany, Maas said the aim was the aim to "secure the hard-won rights for many sections of the [Afghan] population."

Referring to outgoing US President Donald Trump's push to withdraw American troops and Taliban-Kabul peace negotiations, Maas said Afghanistan "must not be allowed to slip back into war."

A reduction of troops must be linked to "clear conditions," said the German Foreign Minister: "We must not give up lightly this lever in the peace process."

Russian Forces Claims Mariupol Steel Plant is Under Their Control By Agencies 1 day, 18 hours ago

COVID-19 Kills Over One Million In US By Agencies 4 days, 18 hours ago

Ukrainians Forces Continues Their Fighting Against Russians By Agencies 4 days, 18 hours ago