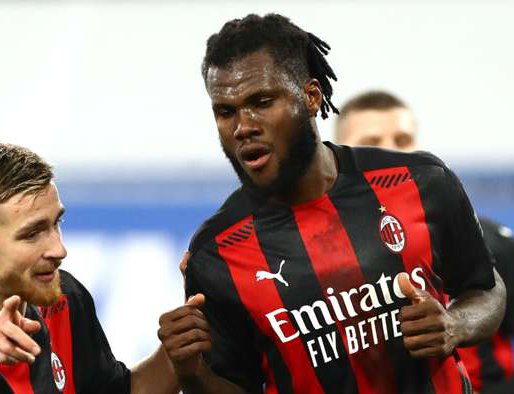 Goals from Franck Kessie and Samu Castillejo gave Milan a 2-1 win over Sampdoria to strengthen their position at the top of Serie A.Goal

Milan strengthened their grip on top spot in Serie A with a 2-1 win over Sampdoria on Sunday thanks to goals from Franck Kessie and Samu Castillejo.

Ivory Coast midfielder Kessie gave the Rossoneri the lead from the penalty spot after Jakub Jankto handled inside the area.

Spaniard Castillejo scored with his first touch of the game to notch Milan's second before Albin Ekdal ensured a tense finish when he bundled in from a corner.

Milan are now five points clear of second-placed Inter after 10 games, with Napoli and Juventus a further point behind in third and fourth.

Gianluigi Donnarumma was called into action early on when a Sampdoria corner presented Lorenzo Tonelli with a header from close range, which the Milan goalkeeper pushed over the crossbar.

Milan slowly discovered their rhythm and Sandro Tonali sent Brahim Diaz clear, but he hesitated in a good position and instead teed up Ante Rebic whose finish was weak.

Without the injured Zlatan Ibrahimovic, Milan often lacked spark in attack, although only a brilliant piece of defending kept out Rebic. The Croatian chased a high ball over the top into the box and nudged it beyond goalkeeper Emil Audero, only for Tonelli to slide back and hook off the line.

Milan were awarded a penalty on the stroke of half-time when the referee deemed Jankto's arm had been away from his body as he attempted to block a Theo Hernandez header, and Kessie duly converted from the spot.

Stefano Pioli's side struck the woodwork just after the interval when Tonali finished off a slick passing move with a shot against the post which Audero recovered to gather.

Sampdoria eventually sparked into life and pinned Milan in their own half, but despite forcing three corners the Blucerchiati were unable to seriously trouble Donnarumma.

Tonali did well not to react to provocation from Antonio Candreva, who twisted his ear in a bizarre incident on the hour from which the on-loan Inter midfielder was fortunate not to have been booked.

Pioli threw on Castillejo for Alexis Saelemaekers with 13 minutes left and the Spaniard made an immediate impact as he fired home from Rebic's cross.

Sampdoria pulled a goal back when Ekdal managed to scramble the ball in from a corner, deemed to have crossed the line by goalline technology despite Donnarumma's efforts to haul it out.

Ekdal had a chance to equalise at the death when he met Candreva's cross but could only plant his header wide from close range.

What does it mean? Milan formidable on the road

Milan have now won their last seven away league games and have only managed to string together so many successes on the road twice before in their history in Serie A: in 1993 under Fabio Capello (nine away wins in a row) and in 1964 under Nils Liedholm (seven wins).

If Pioli's side are to go the distance, and put themselves in the reckoning to win their first Scudetto since 2011, then continuing to churn out hard-fought victories away from San Siro will need to continue.

Kessie looked anxious before taking the spot-kick but then audaciously struck it high down the centre of the goal as Audero committed himself.

Milan are now unbeaten in 18 Serie A games where Kessie has found the net (won 16, drawn two) as they set a new club record by scoring in 30 consecutive league games, eclipsing a 29-game streak between 1972 and 1973.

Milan are the side Sampdoria captain Fabio Quagliarella has faced the most times in home Serie A games (15) without ever finding the net.

Quagliarella had another difficult game up front against the Rossoneri as he failed to make an impact, managing no shots on target in the entire contest.