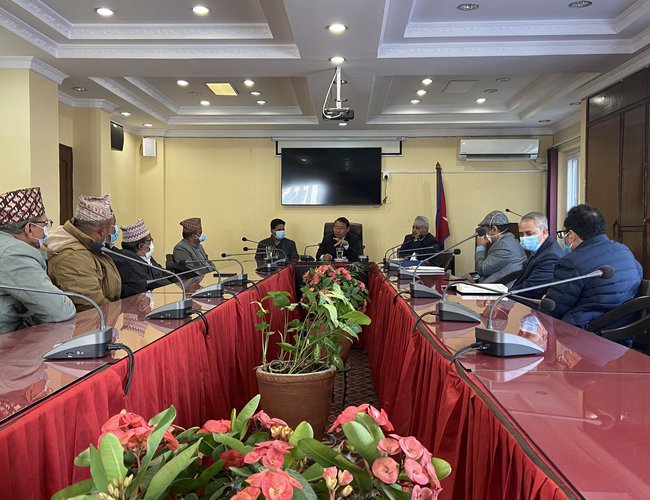 To remove obstruction created by local people in the construction of Marsyangdi-Kathmandu 220 KV Transmission Line, Minister for Energy, Water Resources and Irrigation Barshaman Pun has constituted five members task force to present report recommending the suggestion with compensation to the local people.

Following the people's representatives of Dhading drew the attention of Minister Pun about the demand of the locals. Minister Pun has formed a task force on Sunday to suggest solutions to the problem.

Lawmaker of Dhading Bhumi Tripathi, Net Prasad Poudel, District Chairman of Communist Party of Nepal and Laxman Khatiwada, ward chairman of Siddhalek Gaunpalika-7 said that the people of Dhading did not want to convey the message that they were against development.

Locals in Siddhalek Gaunpalika-7, Pipaltar of Dhading have been demanding relocation of some towers from the pre-determined location during the construction of Marsyangdi-Kathmandu 220 KV double-circuit transmission line.

The five-member task force formed under the leadership of the Joint Secretary of the Ministry of Energy has representatives from Nepal Electricity Authority (NEA) and District Administration Office Dhading, ward chairperson of Siddhalek Gaunpalika-7 and one representative from the affected area.

Minister Pun has directed the task force to submit suggestions within two weeks to the affected people, including rehabilitation and resettlement programs.

Minister Pun informed that the decision on relief would be taken by the NEA Board of Directors as per the suggestions of the task force.

The transmission line is being constructed from Markichowk in Tanahu to Matatirtha in Kathmandu to supply electricity to Kathmandu Valley from the Marsyangdi River Basin Projects.

He reminded that even though some people lost their houses and lands during the construction of power generation and transmission projects, they should not forget the fact that roads have been built, markets have been expanded and employment opportunities have been created due to these infrastructures.

He clarified that the government would make arrangements for the rehabilitation and resettlement of all those who had lost their land.

On the occasion, Secretary at the Ministry of Energy Dinesh Kumar Ghimire said that the construction of 220 KV transmission line should not be delayed even by a day. He expressed the commitment that the ministry was ready to solve the problems of the locals by diversifying the options.

Stating that the government was implementing the Energy Decade (2075-2085) program, he said that 15,000 MW of electricity would be generated in the next 10 years.

Minister Pun said that 10,000 MW would meet the domestic demand and the remaining 5,000 MW would be sold in the regional market.

"As in the past, the country will not be a hostage for long time due to non-import of diesel and petrol."

Minister Pun said that around 1,300 MW power would be connected to the national grid and total installed capacity would reach 2,600 MW within the current fiscal year.

Bangladesh Is Ready To Buy Electricity Generated In Nepal: Ambassador Chowdhury By Agencies 6 hours, 41 minutes ago