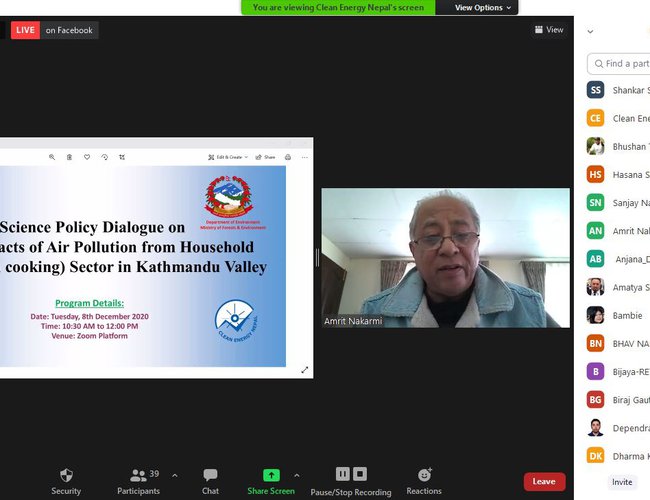 Raja Ram Pote Shrestha, from Nepal Office of World Health Organization, said that indoor air pollution is a major issue and should be taken seriously. “Every year around 24,000 people die due to indoor air pollution in Nepal, which is 3 times more than the deaths due to COVID in a single day.

Addressing the program, which was moderated by the Board Chair of Clean Energy Nepal (CEN), Bhushan Tuladhar, He said that the household energy sector is one of the major sectors causing deaths due to the air pollution in Nepal.

He said that the household energy sector is one of the major sectors causing deaths due to the air pollution in Nepal. So, implementation of policies on Air Pollution can contribute to Air Quality Management and will have significant health and climate co-benefits” he concluded. The first presentation was delivered by Prof. Dr. Sanjay Nath Khanal where he highlighted the health impacts of air pollution from the house energy sector.

He mentioned that indoor air pollution is attributed to 113 mortality per 100,000 people in Nepal, which is the highest such death rate in South Asia and more than three times the global average. He further shared that a total of 3,745 mortality and 117,475 DALYs associated with indoor air pollutants could be prevented in Kathmandu Valley with substantial use of electricity and reduction in use of biomass and kerosene while cooking. Continuing his presentation, Dr. Khanal briefly shared about the policies and strategies of the Government of Nepal to provide clean household energy.

He stressed on the need to maximize health benefits through use of clean fuels and use of pollution tax for the promotion of electric and renewable energy technologies for cooking by using polluters pay principle.

Three presentations were observed followed by the discussion among the stakeholders. Dr. Samir Kumar Adhikari from Ministry of Health and Population (MoHP) welcomed all the participants and speakers of the program and

The second presentation was delivered by Mukesh Ghimire, Assistant Director from Alternative Energy Promotion Center (AEPC) where he shared the data of the Ministry of Finance (MoF) stating that about 69% of the Nepalese population uses traditional energy whereas renewable energy is only 3.2%.

He said that the GoN envisions electricity for all by 2022 and Clean Cooking Solutions for all by 2030. There is disparity in cooking modes in rural and urban settings which indicates that firewood is the most used cooking energy in rural areas whereas penetration of LPG is increasing in urban areas. Our main goal should be to minimize the unsustainable use of firewood in rural areas and limit the use of LPG in urban areas and move towards the cleanest form of energy and technology, he stressed. He also shared different policy interventions on clean cooking and AEPC’s plan for electric cooking and its promotion.

Hasana Shrestha, Environment Inspector from Department of Environment (DoEnv) presented on “Activities to control indoor air pollution from the household energy sector in Kathmandu Valley Air Quality Management Action Plan, 2020”. She explained about the strategy of KVAQMAP-2020 which aims to work on indoor air pollution minimization through promotion of clean energy and technology. She said that fuel use and cooking practices of urban and rural areas are different so we should therefore prioritize more on electric cooking in both settings.

She also said that although the energy usage in urban and rural sectors is different, the indoor air pollution is affected by the living space which makes the air pollution in urban areas slightly different. Some of the challenges faced during indoor air quality monitoring are cultural issues, behavioral issues and ethical issues therefore awareness programs are necessary.

In the dialogue, experts working in indoor air pollution shared brief findings from their study. Prof. Dr. Amrit Man Nakarmi, Tribhuvan University shared the result of one of their latest studies conducted in 8000 households in urban and rural areas of Province 1 and 2 where it was found that 90% people were still cooking on solid biomass. Only 17% and 9% people were found cooking in LPG in Province 1 and 2 respectively. Despite knowing the benefits of electric cook stoves it was found that just below 1% people were using it. Various experts working on household energy and air pollution shared their remark in the program during the discussion session and also shared their questions which were addressed by the presenters.

Similarly, Prof. Dr. Jagan Nath Shrestha highlighted results on economic analysis study of different stoves where he shared that use of electric appliances were cheaper than LPG, Mud cooker and Infrared stove.

The dialogue was jointly organized by the Ministry of Health and Population (MoHP), Department of Environment (DoEnv), World Health Organization (WHO) and Clean Energy Nepal (CEN) under Urban Health Initiatives (UHI) where around 60 participants joined the program representing experts and individuals, representatives of government agencies, CSO’s, Academia.

With the objective to discuss status, policy implications and measures to address the health impact of air pollution from the household energy sector, a science-policy dialogue was organized through Zoom platform today. 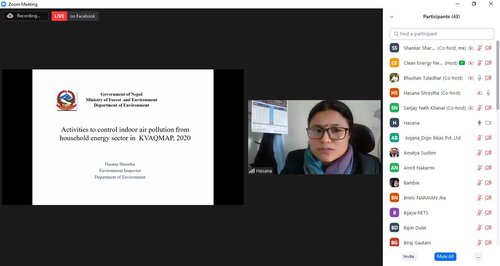 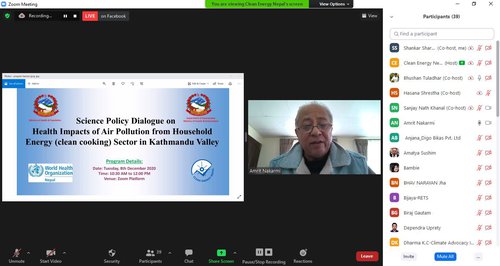 Excited To Be In Beautiful Nepal: Under Secretary Uzra Zeya By NEW SPOTLIGHT ONLINE 1 day, 16 hours ago

Korean INGO UHGHF To Buil A School In Dailekh By Agencies 2 days, 17 hours ago