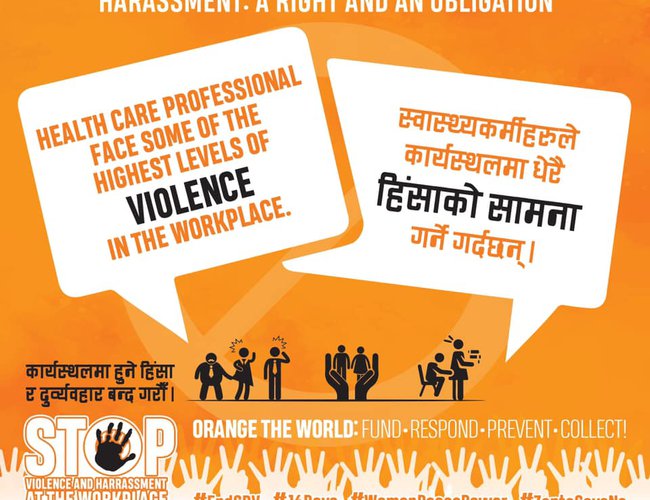 To mark the 16 days of Activism against Gender-Based Violence 2020 (November 25 to December 10), the Zonta Club of Kathmandu had organized a campaign to raise awareness to end violence against women in the world of work in both formal and informal sectors. The campaign has successfully completed today.

For this campaign, the Zonta Club of Kathmandu collaborated with the Federation of Nepalese Chamber of Commerce and Industries (FNCCI), the International Labor Organization (ILO), the International Organization for Migration (IOM), Pourakhi Nepal, Kumari Bank Limited and Royal Thai Embassy Nepal. With the theme “Orange the World: Fund, Respond, Prevent, Collect!” “A World of Work Free from Violence and Harassment: A Right and An Obligation”, the campaign highlighted the need of a safe and harmonious work environment, ways to reach out to vulnerable women and ease the reporting system so that their voice can be heard.

The campaign was inaugurated virtually in presence of Minister Lilanath Shrestha, Ministry of Women, Children and Senior Citizen (MoWCSC), Government of Nepal. During the campaign, the Zonta Club of Kathmandu organized three virtual panel discussions where dignitaries from various sectors highlighted the needs and importance of awareness against GBV, psychological and economic impacts and the need to find solutions to the increasing cases of violence and harassment especially in the world of work.

A virtual training was also conducted for HR professionals with the aim to help them to understand the need to formulate and implement policies in the workplace to make it safe and free from violence and harassment. Close to 500 individuals participated in the virtual events and the Facebook live have received over 8K views. The campaign witnessed participation from a large number of audiences and was a great success.

As part of the campaign, stickers on awareness to end workplace violence and harassment were produced and distributed; radio programs and jingles were also played targeting women migrant workers focusing on the need for safe migration. In addition to this, media personality, Ms. MalvikaSubba hosted four different sessions on her official Facebook page with returnee women migrants on their struggles and successes with the topic “Women Migrant Workers Survivor and Success Diaries”.

For wider awareness, messages to end workplace harassment were also displayed in United World Trade Center on December 10, 2020. At the end of the campaign, Zn Seema Golchha, President, Zonta Club of Kathmandu shared, “Zonta Club of Kathmandu is pleased to successfully conclude the 16 days of Activism against Gender-based ViolenceCampaign 2020, which aimed to raise awareness and to influence action to help create a safe and harmonious work environment for women. We are thankful to the esteemed partner organizations for collaborating with and supporting us in making this campaign successful. In addition to raising awareness on violence and vulnerabilities faced by women workers in both formal and informal sectors, it is important to keep everyone informed about the rights and provisions and available support mechanisms.”

Forbes Listed Five Nepalis In Forbes’ 30 Under 30 From Asia By Agencies 6 hours, 38 minutes ago

Department of Passport Continues To Open On Sunday By Agencies 11 hours, 5 minutes ago