As the global community has celebrated the World Disability Day 2020 by organizing various programs calling on all to protect the rights of People with Disability amid COVID-19 Pandemic, Nanda Raj Bhatta, a person with disability from Far Western Province of Nepal, has shown how to live with dignity and respect. With support from his wrist and mouth, Bhatta, who was born without palm, has been using all modern communication equipment and launching programs to encourage people with disability to live in self reliance 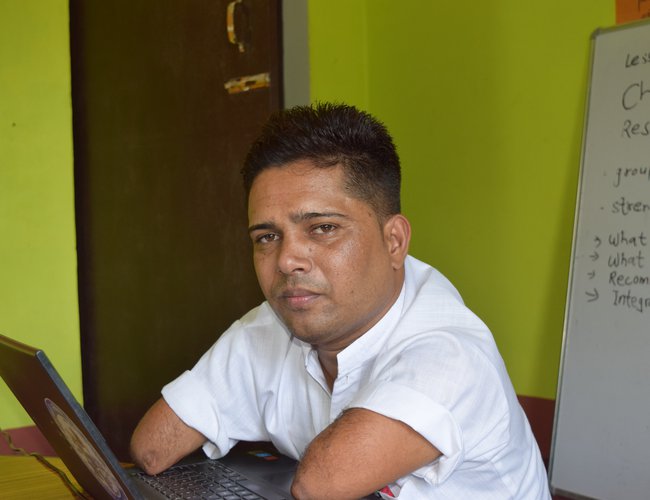 When Nanda Raj Bhatta was born in remote Surnaya-3, Baitadi, with an incomplete physical body, the first reaction of his neighbors to his mother and father was to throw the child in the Mahakali River.

“Coming from a conservative and tradition-based society, the villagers held the view that the birth of a child with short foot and without the palm was ill-timed. They had tried to convince Bhatta’s mother and father that birth of such a child is a curse and it is better to throw the baby in Mahakali for the sake of salvation,” narrates Bhatta.

Rejecting such an inhuman suggestion, mother Parbati Bhatta and father Rani Bhatta decided to make the boy a model for society and people with disabilities. Having faced several difficulties to fulfill their determination, the poor family of Rani Bhatta and Parbati Bhatta moved side by side with son Nanda Raj Bhatta. 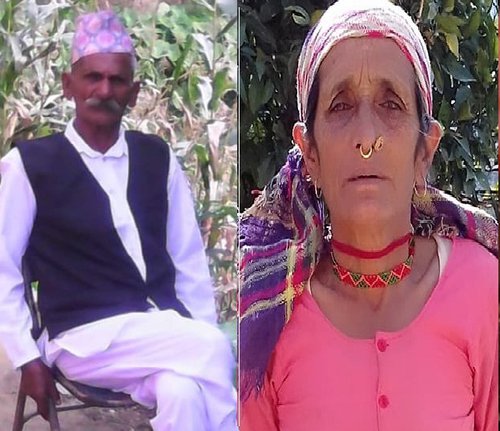 With strength, patience and courage, his mother and father discarded such cruel suggestions, taking a challenge to make her son self-reliant in the competitive world. Facing all kinds of discrimination, she finally proved to her community and other people that being born with a disability is not a curse.

Born in Sunarya Rural Municipality-3 in 2045 and Bhatta went to Shree Virendra Higher Secondary School, Shahilek, Baitadi. Now he a source of inspiration.

The villagers who once pressured Rani and Parbati to throw the baby into the Mahakali river look at Bhatta as an icon for many people with disabilities in the area.

“My parents have shown the way to all villagers how a person with a disability can make difference. Of course, we are physically disabled but we are mentally fit. We can work more than able persons,” said Bhatta, who has been busy all day taking part in various programs and seminars.

Living with an extended family of 12 and wife Kabita Bhatta and four years daughter Arina Bhatta in Dhangadhi, Nanda Raj Bhatta has suffered a lot, including a lack of disabled-friendly transport, office buildings and restaurants. 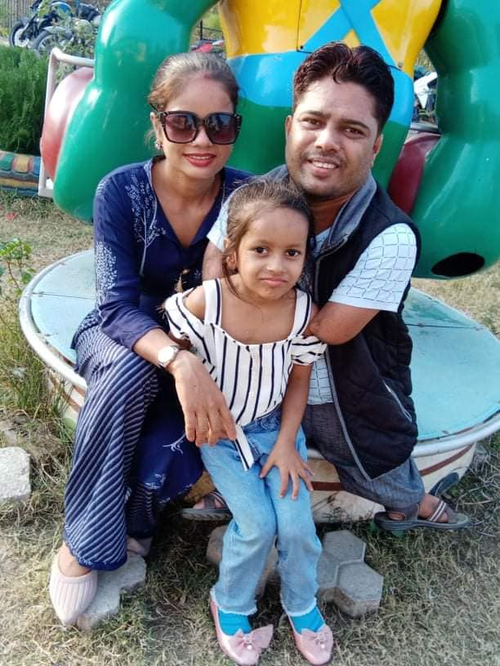 “It is unfortunate that I had no access to any disabled-friendly education buildings. Despite certain improvements, things have not changed much in the country,” said Bhatta.

Writing from his mouth and his foot, he has completed his master’s degree. Having made a love marriage in 2071, Bhatta has a 4-year old daughter.

Although his financial condition was not good and going to school in the mountain area was not easy, his parents helped him much to complete his education. 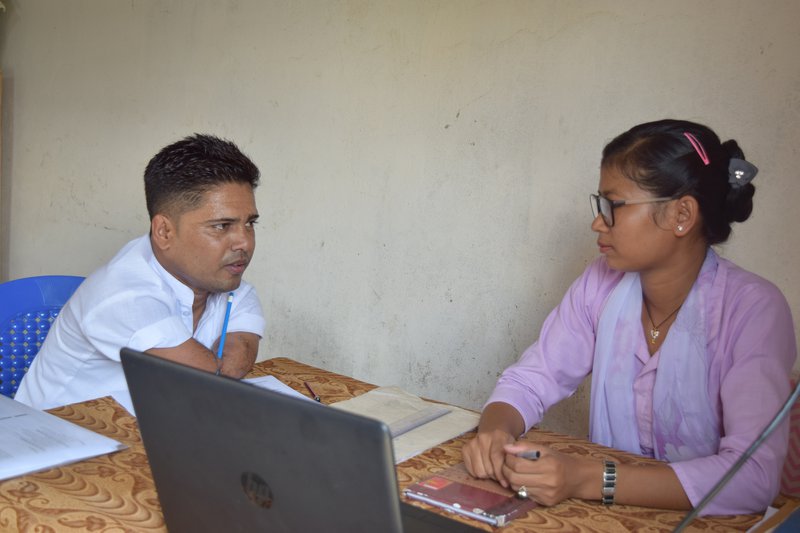 “After completing my studies in my village, my parents took me to Dhangadhi with my School Leaving Certificate. Looking at my physical condition, the campus chief declined to admit me,” recalls Bhatta, who has been categorized in the second layer of disability under Nepal’s three categories of disability.

With support from one of his villagers, he was admitted to the college. Then he never turned back.

“Following the completion of my certificate and bachelor levels from Dhangadhi, I decided to join Tribhuwan University for my master’s degree. Many people discouraged me from going to Kathmandu, but my determination to complete the master’s degree did not stop.”

Bhatta, a Community Service Worker from Dhangadhi, has shown that physical disability cannot prevent a person’s ability to work and complete with other normal people.

Now Executive Director at HDDS-Nepal, a local NGO working to protect human rights and rights of People With Disability, Bhatta is a person with high demand in the region to hold different classes and orientation to people with disability. Bhatta has been traveling extensively in the region as well as in different parts of the country and managing the HDDS-Nepal.

Although he also faced all kinds of discrimination in society, Bhatta did not care it much. He made the destiny for his survival in his own way. From early morning to late evening, Bhatta visits different villages to encourage and inspire people with disabilities in Sudur Paschim Province and organizes programs to protect the rights of people with disabilities.

As COVID-19 has badly hampered the mobility of people with disabilities in the region, Bhatta is calling for Greater Inclusion amid Covid-19.

If a person has the will, courage, determination and family support, he or she can make a difference in the world. This is what Bhatta has shown. Although he was born without the palm, finger and wrist in the remote Far-western part of Nepal, Bhatta has shown the way to other people with disabilities to live independently working in the competitive environment.

Although Bhatta (Spandan) was born without fingers, wrist and palm, he used other physical parts of the body as an alternative to using the laptop, mobile and other equipment.

As the world is celebrating International Day of Persons with Disabilities 2020, Bhatta has a bit of frustration over the recent action of the government not showing any interest to provide welfare and other schemes to people with disabilities.

As there were growing voices for greater inclusion amid COVID-19 ahead of World Disability Day on December 3, Bhatta was championing the cause from Dhangadhi.

Ahead of World Disability Day on December 3, United Nations Secretary-General Antonio Guterres called for greater inclusion of persons with disabilities in society, including in COVID-19 response and recovery. "Realizing the rights of persons with disabilities is crucial to fulfilling the core promise of the 2030 Agenda: to leave no one behind," Antonio Gueterres said, referring to the global action plan to bring about a more just and sustainable world.

International Day of Persons with Disabilities 2020 Theme: "Building back better: towards an inclusive, accessible and sustainable post-COVID-19 world by, for and with persons with disabilities" is the focus in the pandemic year. UNESCO will also organize a Global Awareness Raising Campaign "Tell our stories, enable our rights".

"In all our actions, our goal is clear: a world in which all persons can enjoy equal opportunities, participate in decision-making and truly benefit from economic, social, political and cultural life. That is a goal worth fighting for," the UN chief said at the 13th session of the Conference of States Parties to the Convention.

"While I celebrate that there are now 182 parties to the convention, the pandemic has made evident that there is still a long way to go in fully understanding the human rights model of disability enshrined in the convention, and therefore is fully implementing its provisions," Guterres said in a video message.

"We must also ensure that the vision and aspirations of persons with disabilities are included and accounted for in a disability-inclusive, accessible and sustainable post-COVID-19 world," he said.

As the whole world was marking the 29th International Day of Persons with Disabilities, Bhatta had his message to other women and men with complete or partial disabilities that proper guidance, support from family, friends and education only can help make people's life easier and independent and happy.

He said although there are dozens of private and non-governmental organizations working in the sector of persons with disabilities, the government's own National Disabled Fund, under the Ministry Women, Children and Senior Citizens, has been doing its best to provide all possible support to the persons with disabilities across the country with the available resources and the fund the government provides them annually. 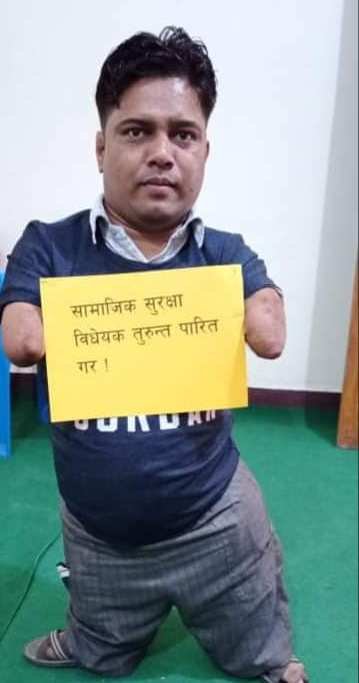 Bhatta’s message for people with disabilities is that the sky has no limit, what is required is determination and dedication to doing something for the betterment of society and community. 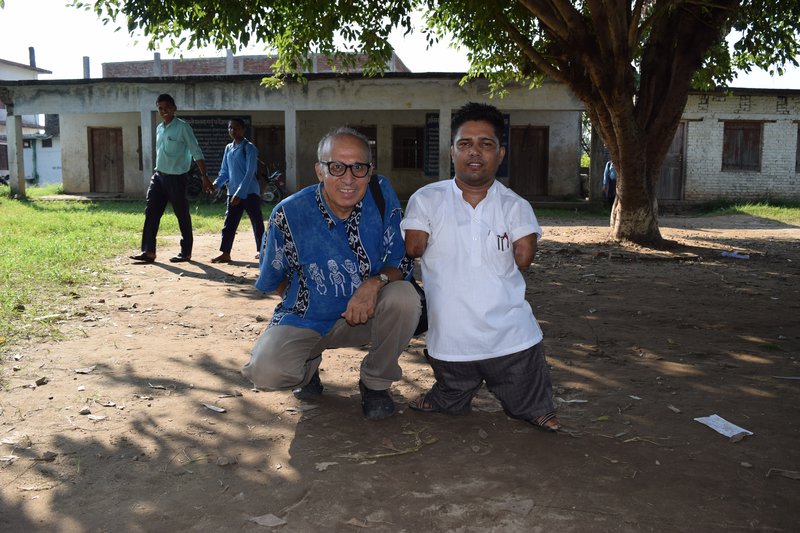