NC Leaders Deuba And Dr. Koirala Contradicted Each Other

No One Can Change Republic And Secularism: President Deuba, NC Will Call Referendum On Hindu State If Elected: General Secretary Dr. Koirala 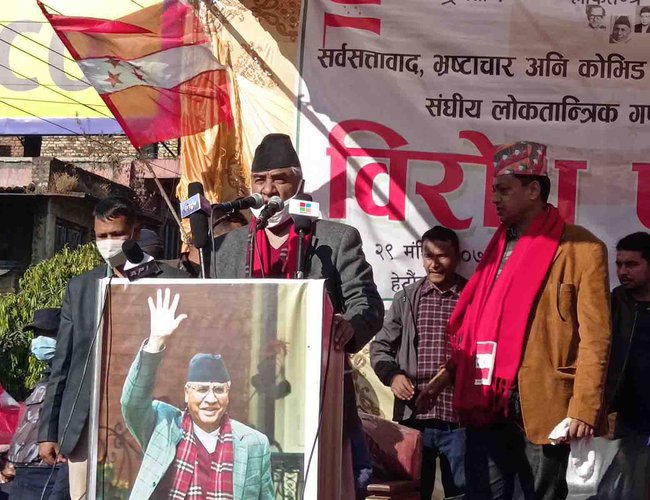 As Nepali Congress President Sher Bahadur Deuba has blamed the incumbent government of failing to carry out effective works as per the people's demand and need and conspiring for Monarchy and Hindu State, General Secretary Dr. Shashanka Koirala said that his party will call Referendum On Hindu State.

Contradicting PM Deuba’s stand, General Secretary Koirala said that Nepali Congress will call the referendum on Hindu State if it will be elected with majority in coming election.

NC President Deuba said in a protest program organized by Nepali Congress, Makawanpur, at Hetauda on Monday. Also former Prime Minister, he argued that the government failed to carry out proper treatment and relief task even in this unfavorable situation of COVID-19 in the country.

The NC President accused the government of not taking effective steps to stop corruption.

Over 93 Percent Results Of Local Poll Announced, Balen and Chiribabu Leading In Kathmandu And Lalitpur Respectively By Agencies 1 day, 8 hours ago

Only 10 Percent Of Results Remains In Local Level Polls By Agencies 2 days, 7 hours ago