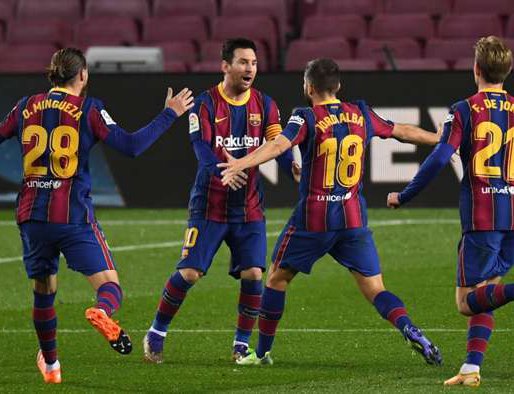 Jordi Alba felt Barcelona produced their best performance of 2020 in their 2-1 Liga victory over Real Sociedad.

The Catalans fell behind to a Willian Jose goal at Camp Nou on Tuesday after dominating the opening 25 minutes without managing a shot on target.

However, they responded well, Alba blasting home a fine equaliser before setting up Frenkie de Jong to make it 2-1 before half-time.

Real Sociedad improved after the break, restricting Barca to just 38.6 per cent possession after the hosts had enjoyed two-thirds of the ball in the first half, but Marc-Andre ter Stegen's only save of note came late on when he blocked an effort from Alexander Isak.

Barca, who have beaten Sociedad 23 times in a row in home league games, are now six points off the top of the table thanks to their first back-to-back league victories since October 1.

Alba felt the first half was Barca's strongest showing in 2020, even if he modestly suggested there was an element of luck to his emphatic equaliser.

"It was the best game of the year," he told Movistar. "I'm really pleased with the team's attitude and fight. The motivation was big and we keep climbing [the table].

"They changed their way of playing. We knew it would be a difficult game against one of the best teams in La Liga.

"I get more joy from giving assists. You score one in a hundred from those types of shots. I was lucky.

"We scored soon after they got their goal and the team played a great game. We saw a great Barca, who fought for every ball."

Barca's lead was under threat when Isak raced through on goal only for Pedri to make a crucial challenge, the teenager then colliding heavily with the post for his troubles.

It was a moment that summed up Barca's robustness under pressure in the second half as they inflicted just a second league defeat of the season on Imanol's side.

"We knew it was an important game and we went out to give everything," he said. "We were missing a bit of assuredness in front of goal before and we have it now."