The Argentine now sits alongside O Rei with 643 goals for Barcelona, earning the Santos legend's admiration 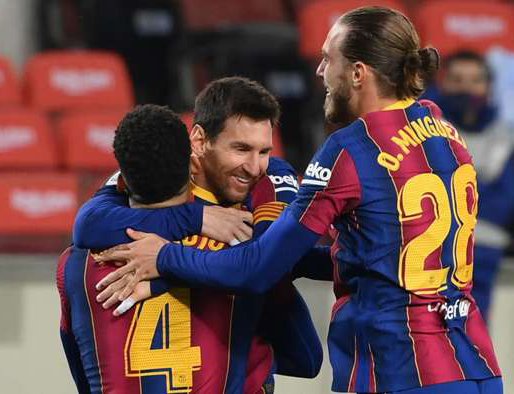 Brazilian football legend Pele has congratulated Lionel Messi for matching his record for goalscoring at a single club, which has stood for almost half a century. Goal

Messi netted his 643rd competitive goal in Barcelona colours on Saturday to level against Valencia at Camp Nou, after Mouctar Diakhaby had fired the visitors into an early lead.

That figure matches Pele's record with Santos in official competition during his time at Vila Belmiro, although the Brazilian scored many more in friendlies and tours that are not included on the record books.

The Argentine, who is by some distance Barca's all-time highest scorer, was unable to crown a memorable day with victory, as the Liga clash ultimately ended 2-2.

But despite now having to share his record, which will surely fall in the days or weeks to come, Pele expressed his admiration that another superstar has shown the same loyalty and dedication that he demonstrated over almost two decades representing Santos.

"When your heart overflows with love, it is difficult to change your path," the 80-year-old former forward wrote on Instagram.

"Stories like ours, of loving the same club for so long, unfortunately will be increasingly rare in football. I admire you very much, @leomessi."

Messi now has six goals in the 2020-21 Liga season, as both he and Barcelona have struggled to show their best form under new coach Ronald Koeman, who took over from Quique Setien in the wake of August's 8-2 Champions League humiliation at the hands of Bayern Munich.

The Catalans sit in fifth place in the league, eight points shy of current leaders Atletico Madrid having played one game more than Diego Simeone's charges.

They will return to action on Tuesday away to Valladolid in their final game before a mini-break for Christmas.