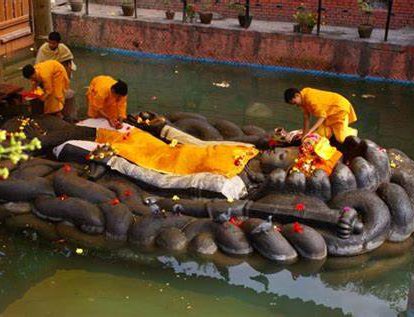 The Budhanilakantha Narayansthan Temple has been opened for devotees from today. The temple was closed for devotees since the government enforced nationwide lockdown to contain the spread of coronavirus last March reports RSS.

According to RSS, Bagmati Province Assembly member Dipak Niraula and Mayor of Budhalinakantha Municipality Uddhav Prasad Kharel announced at a programme on the temple premises that the shrine was opened now.

On the occasion, Province Assembly member Niraula said religious tourism could be promoted by making publicity on the historic, religious and cultural importance of the Budhanilakantha Narayansthan Temple.

Similarly, Mayor Kharel made commitment that new structures would be created to augment religious tourism in the temple. For this, he sought cooperation from the concerned people to allow the land acquired 35 years back for it.

Mathadhis at the temple, Mahanta Swami Nigamananda informed that the temple, closed for nine months due to Covid-19 menace, was opened by maintaining health protocol and physical distance.

Although the temple was closed, regular puja and lighting were conducted.

Senior advocate Purna Man Shakya has been elected as the new chair of the Supreme Court Bar Association Executive Committee. He was elected in the election held on Saturday for the 33th executive committee of the Bar.

Shakya won with 295 votes against his nearest rival senior advocate Rabi Narayan Khanal who got 250 votes. Shakya had represented the greater democratic inclusive group in the election while Khanal represented the progressive and professional group.