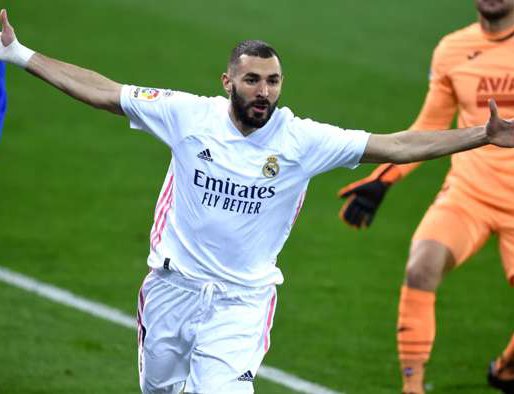 Real Madrid beat Eibar 3-1 on Sunday, with Karim Benzema playing a vital role as Los Blancos move up to second in the table.Goal

Karim Benzema led the way as Real Madrid claimed a fifth successive win in a 3-1 triumph at Eibar on Sunday to go second in LaLiga.

Zinedine Zidane had been under intense pressure at the start of December due to a run of poor results, but the win at Ipurua was their fifth on the bounce across all competitions and leaves them on the tail of bitter rivals and pacesetters Atletico Madrid.

Benzema looked in the mood right from the start of an action-packed first half, the striker scoring and then teeing up Luka Modric in the early exchanges, before also having an effort disallowed for offside soon after Kike Garcia's stunning effort gave Eibar a lifeline.

Eibar certainly had their chances to clinch what had seemed an unlikely draw, but failed to take their opportunities and were punished again when Benzema played through Lucas Vazquez to wrap up the points in stoppage time.

Madrid started the contest with great intensity and appeared to be cruising to victory when they were 2-0 up by the 13th minute.

Benzema brought down Rodrygo's clever scooped pass over the defence and was left with a routine finish to open the scoring, before turning provider when he robbed Kevin Rodrigues in the Eibar box and cut back for Modric to sweep home.

But shortly after Benzema spurned a chance to make it 3-0, Eibar pulled one back – Garcia curling an unstoppable strike into the top-right corner from 25 yards.

Eibar should have been level 10 minutes into the second half, but Takashi Inui dragged a shot hopelessly wide instead of squaring to Yoshinori Muto after pouncing on a wayward Ferland Mendy pass.

Muto was the next to waste a presentable chance for Eibar, failing to hit the target from a Garcia cross.

Sergio Ramos produced a vital tackle to prevent Eibar the chance for a late equaliser, and Madrid almost immediately went up the other end to put the win beyond doubt – Vazquez finishing off after more good work from Benzema.

The way the champions began the match, you could not help but fear for Eibar. The visitors were devastating early on, hounding their opposition all over the pitch and passing through their press to great effect.

However, they just seemed to ease off once they were 2-0 up, and Eibar had opportunities to restore parity – their tally of 10 shots was only one fewer than Madrid's 11. As it was, Madrid's superior quality shone through with Benzema and Modric pulling the strings, though Zidane might be frustrated by the lull.

Benzema was an almost-constant menace to the hosts' defence, who struggled to cope with his dominant performance.

His 10th goal in as many games across all competitions was well-taken, and his assist for Modric required great awareness and desire to initially win the ball back. He then capped off a superb individual display with a threaded pass through to Vazquez, taking his total of goal involvements against Eibar to 12 from 11 league appearances against them. A fine day's work.

It was not all bad for Eibar left-back Rodrigues, as his six interceptions was a match-high and he got an assist with his short pass to Garcia, but he was culpable for Madrid's second goal, lost possession 26 times – more than anyone else on the pitch – and won only 29 per cent of his seven duels.

There was plenty of gusto, just not enough quality.