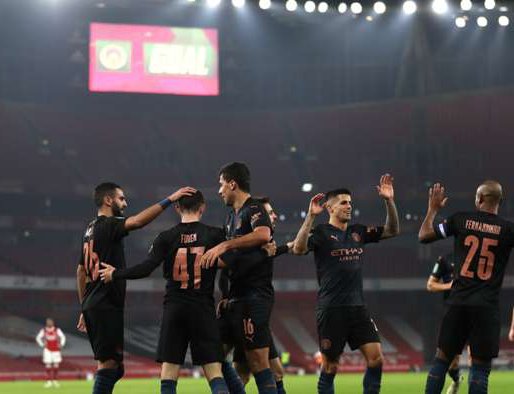 Arteta, who was Pep Guardiola's assistant at City before taking charge of the Gunners a year ago, has faced questions over his future after a dismal start to the season has left his side languishing in 15th in the Premier League.

He did not find any respite against his former club, with City – who have won the competition in each of the last three seasons – easing through to the last four after second-half goals from Riyad Mahrez, Phil Foden and Aymeric Laporte.

Alexandre Lacazette had earlier given the hosts hope of ending a run of three straight home defeats to City when he cancelled out Gabriel Jesus' early opener, but that proved to be a rare moment of joy in yet another turgid defeat for the beleaguered north London club.

The visitors started in ruthless fashion, taking the lead after just 125 seconds when Jesus headed Oleksandr Zinchenko's left-wing cross past Runar Alex Runarsson inside the six-yard box, ending a goal drought of 609 minutes for the Brazilian.

Laporte headed wide from a corner before the Gunners pulled level with their first effort on target in the 31st minute, Lacazette heading home Gabriel Martinelli's cross from six yards out.

City should have restored their lead before the interval, but Runarsson raced off his line to deny Jesus after a smart move on the edge of the penalty area involving Foden.

The Arsenal goalkeeper was entirely at fault for City's second nine minutes after the interval, though, allowing Mahrez's free-kick from the edge of the area to squirm through his tepid grasp.

City added a third five minutes later when Foden latched onto Fernandinho's pass and lofted a delightful finish over Runarsson, although the goal would have been disallowed if VAR had been in use with replays clearly showing the midfielder was offside.

The holders added gloss to an 18th straight victory in the competition in the 73rd minute, Laporte stealing in at the back post to head home Foden's inviting cross.

Arteta said this week he wanted the "fighters" in his Arsenal squad to come to the fore as they bid to turnaround a dreadful start to the campaign. His rallying cry fell on deaf ears, though, as City swatted aside the accommodating hosts with the minimum of fuss.

Lacazette's goal was one of only two shots on target as Arsenal conceded four times at home in an EFL Cup game for the first time since November 1998, when they lost 5-0 to Chelsea.

Foden was in dazzling form, scoring a fine third goal and then creating Laporte's strike with a superb cross. The England international completed 28 of his 32 passes and won all three of his duels in a wonderful all-round display.

No Arsenal player covered themselves in glory, but Ainsley Maitland-Niles was particularly poor. He lost possession 20 times – more than any other player on the pitch – won just two of his nine duels and failed to play a single key pass.

Arsenal will be looking to end a seven-game winless streak in the Premier League when they host Chelsea on Saturday, while City entertain Newcastle United on the same day.