A slew of new coronavirus outbreaks sours Christmas festivities for millions of people around the world. 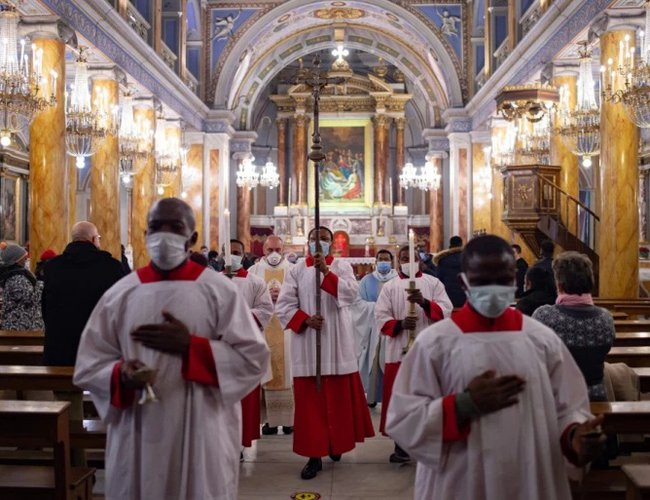 A slew of new coronavirus outbreaks sours Christmas festivities for millions of people around the world.

Millions of people have been forced to cancel plans or limit Christmas festivities under the new coronavirus measures after a slew of new outbreaks around the world.

Following a grinding pandemic year that has seen more than 1.7 million people die from COVID-19, Bethlehem, where Christians believe Jesus was born, was preparing on Thursday for a Christmas unlike any in its recent history.

The Christmas Eve mass at the Church of the Nativity is traditionally the highlight of a holiday season that sees hundreds of thousands of visitors flock to the Palestinian city in the occupied West Bank.

The mass will be closed to the public this year and broadcast online, with only clergy and select individuals allowed inside the basilica, which was sterilised earlier on Thursday before the service.

A procession of bagpipers and drummers marched towards Manger Square, watched by a mostly-masked Palestinian crowd that lined the streets under grey skies and a smattering of rain.

“Despite the fear, the frustration of COVID, we will overcome because Jesus is born in Bethlehem,” said the Latin patriarch of Jerusalem, Pierbattista Pizzaballa, during the procession.

Attendee Jania Shaheen, who was with her two small children and husband in the square, said the holiday was “different this year, because we can’t pray at the Nativity Church”.

“We can’t gather as a family, everybody is afraid… It is good to see some people here today but there is no one compared to last year. It is only for the people of Bethlehem,” she told AFP news agency.

Elsewhere in the region, Kuwait on Thursday joined other Gulf nations in rolling out a mass coronavirus vaccination programme, while across the Atlantic, Mexico started administering jabs to front-line medical workers.

In Australia – often a rare bright spot in keeping the virus in check – a growing cluster of cases in northern Sydney has confined residents to seaside suburbs and prompted a ban on all but the smallest Christmas family gatherings.

Jimmy Arslan, who owns two cafes at the epicentre of the city’s outbreak, said trade was down 75 percent and his Canberra-based family had been forced to cancel their Christmas visit.

In Europe, much of the continent is enduring a dark winter of resurgent outbreaks.

Germany has been forced to cancel its famous Christmas markets and Pope Francis plans to bring the Vatican’s Christmas midnight mass forward by two hours to meet Italy’s curfew rules.

In Christmas Eve messages, the pope expressed his desire to visit crisis-hit Lebanon and urged political leaders in South Sudan to continue working for peace.

For many, the isolation that has defined the past year will continue into Christmas day and beyond – such as in Belgium, where residents are largely limited to welcoming a single visitor.

In the Catholic-majority Philippines, some are choosing to spend the holidays alone because of the risk of catching the virus on public transport, as well as quarantine rules making travelling time-consuming and expensive.

“I am ordering food in, rewatching old movies, and catching up with my family by video,” said Kim Patria, 31, who lives alone in Manila.

Britons, meanwhile, were cut off from swathes of the world, due to the emergence of a new COVID-19 strain.

Some UK border restrictions have been temporarily relaxed for the holidays, but thousands from other European countries are still stranded in England.