Though political parties express their arrogance on the President’s decree recommended by Oli of the dissolution of the HoR, it is yet to resolve due to different interpretation of constitutional arrangements, which is legally being contested at the Supreme Court (SC). 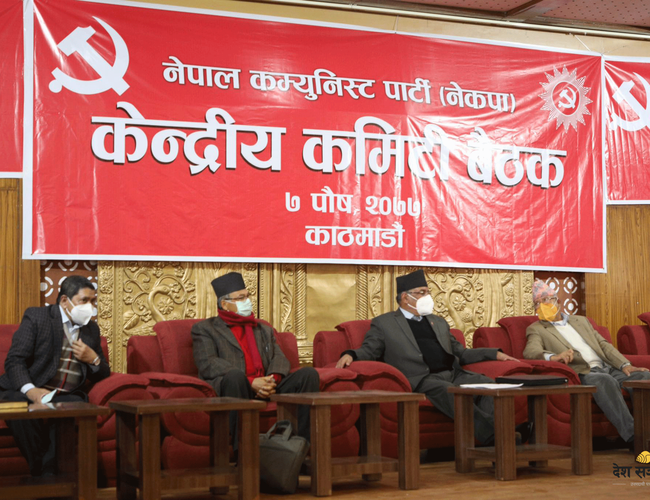 Two years and seven months passed by beckoning for the unity of the communist parties. And has for another time witnessed similar dismay in Nepal’s political course that usually tend to transpire after political alterations once every decade. The two communist parties the United Marxists Leninist (UML) and the Nepal Communist Party Maoists (NCPM) united to contest the elections, where they thrived in recording nearly two third in the federal legislature after two decades in recent election history. The unconvincing harmony did not ensue due to mainly personality, ideological differences, theology, vision and precedence of the Peace Process now steering to the announcement for a new mandate for 30 April and 10 May 2021 with dissolution of the House of Representative (HoR). The optimism for stability and economic enhancement for the Nepali people has been abandoned and has been twisted merely to be a planning fallacy. There is a domestic political compulsions for PM Oli who just acquired temporary settlement. Challenges are at a march-time with a probability of another political discourse in the coming months. The consolidating and strengthening of the focal transformations to federalism, secularism and republicanism is once more in question. The people this day and age cannot be misguided with popular political slogans as people and institutions are aware of realisms, the geopolitical and geo-strategic significance of Nepal in the region.

The signing of the Comprehensive Peace Agreement (CPA) in 2006, ended the 10 year old conflict, but the country is still waiting to bring to an end the peace process with the verdict from the Truth and Reconciliation Commission (TRC) and the Commission of Investigation on Enforced Disappeared Persons (CIEDP) for justice and reparation. During this time, Nepal has ascertained 12 heads of government, three heads of state, two Constituent Assembly elections in 2008 and 2013, proclamation of the constitution in 2015, and local, federal and provincial elections in 2017 besides intermittent violence resulting in dozens of deaths.

The UML and the NCPM amalgamated with a five point agreement in 17th May 2018 and to compete all levels elections with a nationalist fervour, anti-Indian oratory and different political events unfolding stemmed apart on 22nd Dec 2020. The country had passed through different phases of diplomatic and political manoeuvring, while the prominent political personalities reckoned the end of the fight for political freedom and a new era of economic advancement. Diplomatic resentment and optimism shaped Nepal’s path within and with immediate neighbours; while both China and India are seeking their own stance in South Asia as well as in the global platform with US pivotal shift to the Indo-Pacific Region (IPR).

Even if the NCP government was projected as a two third government, it was in effect a UML subjugated largest party administration with contribution from the NCPM. Tempt for unity occurred and consolidated amongst two co-chairs of the NCP. The proceedings and surrounding insinuate that the uncompleted unity is more for Prachanda or Oli to grasp the party or head the executive.

The opposition Nepali Congress is ineffective, while opposition within the ruling party thrived. Though political parties express their arrogance on the President’s decree recommended by Oli of the dissolution of the HoR, it is yet to resolve due to different interpretation of constitutional arrangements, which is legally being contested at the Supreme Court (SC). Politics of convenience is afloat once again in Nepali political diaspora with plans for agitation in the streets.

Politics yet again has detracted the socio-political, political-security and political-economy impacts and challenge that the country will have to address during and post COVID-19. A great set back, which indicates the political dominance in Nepal’s system of governance and the political-economic progression that the government had under taken has gone on limbo. Israel that was established in 1948 with migration from around the world is an example. Israel is about to hold the fourth election in two years, yet it remains the most powerful country in the Middle-East.

The ruling NCP have not given up their old ways, and power tussles, ideological polarisation, competition and differences are the order of the day which threatens to get out of hand and lead to fragmentation of parties and familiar political uncertainty. The Madhes-based parties is firm in their demand for an amendment in the constitution.

The trend of recommending ordnances and dissolution of the HoR has been a means in Nepal’s politics but now for the sixth time it was Oli to prompt his supremacy and grip in power. This recaps what President elect of the US Joe Biden said “The right to be heard. To have your vote counted. To choose leaders of this nation.To govern ourselves. In America, politicians don’t take power-people grant power to them.”

The people in general look for honest and accountable governments and the recent peaceful agitation in the streets in the last few weeks for reestablishment of a Kingdom and a Hindu state is an expression of frustration but more is the lack of people’s democratic participation in the political and social transformation process right from the signing of the CPA. Examples can be South Africa and Zimbabwe’s socio-political and political-economy transformation and where both countries stand in the global judgement today.

The political declaration has resulted in creating three narratives leading to eight challenges to national security. Narrative one – the President’s endorsement followed by election, two - If the HoR is restored by the SC and the third is the call for opening of the parliament by the Chairperson of the HoR, who is part of the Nepal-Prachanda faction. The challenges remain to be one, question of legality with provisions in the constitution, two, formal split of Nepal Communist Party, three, formation of democrats alliance if election is to materialize which will raise the likelihood of the political amendments with election manifestation, four, argument of Federalism, Secularism and Republicism with role of Presidential system, Hindu state and a space for Monarchy post-election, five, political disorder leading to social collision and law and order distress with Emergency and Presidential Rule, six, economic challenges during and post COVID-19, seven, population frustration and deepening of distrust on political parties and finally the diplomatic challenge is placing Nepal in the new geopolitical environment mainly with the rising of Chinese political interests raising question to traditional security order of South Asia. The IPR is refocussing and progressing on value based system of governance with democracy versus communism and on the potential of alliance and coalitions.

Nepal is going through multiple crisis from political instability, pandemic disease, miss governance, economic contraction to systemic inequity and environmental degradation, the interlink challenges of sustainable development have not been vibrant.

National security challenges are mounting with the split of the NCP, weak opposition, and politicalised institutions including the Judiciary, fragile governance and failure of federal system, which will invite political instability and security disorder as well as restlessness within the political sphere.

Religious intolerance, marginalized cultural and traditional values and the rise in unemployment will tempt social collision.

The economic impact by COVID-19 will limit economic opportunities with the fall of remittance and limited economic activities.

With today’s political, economic, security and social strides and continued politicisation; all have to visualise how Nepal will figure post COVID-19 and shape in the next decade? Question of ideology versus realism, the world geopolitical environment and Nepal’s geostrategic placement in the IPR must be visualized agreeably.

It is also an occasion and an opportunity for the people to perceive what is the precise appropriate political system or administrative model for Nepal. For this four concerns necessities to be contemplated for the sovereign people to give their verdict without fear and influence with all the lost years nonetheless with lessons learnt.

First is about addressing corruption as institutionalization of corruption as the major factor in curtailing the people to exercise their universal rights of freedom. The personalities that have held public positions politician, civilians or people in uniform need to verify their rights of ownership of both money and assets with political self-determination and by means of international pressure.

Second, individual interest took lead and priority and neglected the political party’s manifestations. Intra party opposition was stronger than the principal opposition in the parliament. Politicization of institutions has been the core challenge to systemizations, institutional memory and professionalization.

Third, frequent changes in government have led to unclear economic policies. The economy is being shaped more for the benefit of the political party in power than for the country’s overall development. National economic policy to be floated as economic growth has decelerated due to defect in policies

Lastly, is conducting of the election in a free and fair manner for desired ends with one, digitalizing the system of casting votes to avoid invalidity two, all Nepalese citizens in whichever part of the world they may be to be able to utilize their electoral rights three, to bring policies and measures to discourage intra and inter competition and more cooperation amongst the security forces involved in implementing security measures four, executing the election in normal security environment with law enforcement forces five, electoral financial expenditure and to be made public by all agencies for financial transparency and accountability and lastly political seats and vacancies should be allotted to the political professionals contrary to financial precedence.

The current episode has two angles and a long practice of the past. Palace existed to blame for any political mess. Internal rift of the NCP and the tempt to stay in power adds to the practice where immediate neighbours concerns and impromptu visits fits in like the visit by the Chief of Raw and Analysis Wing, India, visit by the Defense Minister and State Councillor of China Wei Fenghe, the upcoming visit by Chinese Vice Minister Yezhou and PM Oli to India.