According to a report published in 2018, almost 80% of the total Nepalese women working abroad are domestic workers and among these as well 80% of them are living there with no proper documents whatsoever 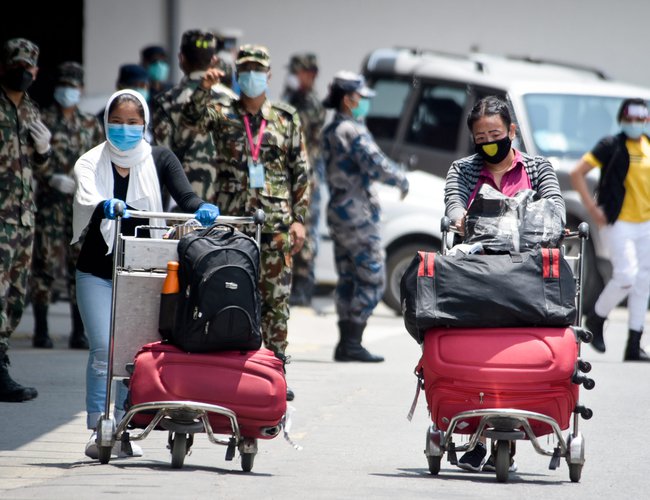 Over the years, going abroad for employment and sending remittance has become a popular trend and an important strategy for many households within the Nepalese society to earn the livelihood. Foreign Employment Board of the government of Nepal estimates that as high as 1.487 million Nepalese are working in the foreign countries as of 2019/2020. Labour migration has not only improved the living of the Nepalese people but has also contributed hugely towards improving the country's economy through the means of remittance.

An analysis of the trend of the remittance flow by the Nepal Rastra Bank shows that remittance flow has increased with annual growth rate of 11 percent during a decade (2009/10- 2018/19), from US dollar 3.1 billion to US dollar 7.8 billion. According to the Bank, remittance generated from the foreign employment was equivalent to 25.4 percent of the country's total GDP in the fiscal year 2018/2019.

The inflow of the remittance within the country has significantly reduced the poverty level of the people over the years and the income distribution has also improved compared to the past. Nepal's economy is highly based on the remittance as 1 is every 3 household in Nepal receive remittance as per a report by the World Bank. Further the report shows that Nepal is currently the highest remittance receiving country in South Asia as a share of its GDP and the fifth highest in the world.

In the past, it was mainly men who travelled to foreign countries as labour migrants as women were not allowed to travel abroad for job employment due to the patriarchal beliefs of the society and various social barriers.Often women migrating to foreign countries for job were looked down upon by the family as well as the society at large. But over the years, these kind of thought processes of the people started to change and women too beganopting for foreign employment in order to achieve their financial independence.

Although labour migration is a recent trend for women than the men, feminization of labour migration is a phenomenon which is so evident now due to globalization. Worldwide the number of female labour migrants is almost half of that of male migrants. In a country like Nepal, labour migration has become an important means of empowerment for women. As per the data estimated by the ILO, Nepalese female migrant workers might be as high as 12 percent of the total workforce abroad. This estimation includes the women who left through the informal channels as well.

While labour migration is a good choice for women for their economic empowerment, there are certain negative facets to it which cannot be discarded. There are reports of several incidents of mental and physical torture and abuse of female migrant workers in the gulf countries time and again. Various problems faced by women working in the gulf countries such as rape, unwanted pregnancy, depression and suicides etc. can be heard and read very often in the news.

As the result of this ongoing problems related to labour migration, government of Nepal has time and again put ban against Nepalese women from travelling to the gulf regions for employment, especially as the domestic workers. While the sole purpose for such ban is considered to be a strategy on the part of the government for the safety and protection of women, human rights defenders have refuted this and condemned the government that this kind of action taken discriminates the women and their right to employment and overall their right to earn for their living.

Recently, the parliamentary committee also has urged the government to relax the ban with seven pre-conditions and let Nepalese women to take up domestic help jobs in the Gulf countries. However, the immediate implementation of this by the government is a matter of question. These kind of banning policies brought in by the government seem to be going against the international obligations such as CEDAW (Convention on the Elimination of all Forms of Discrimination Against Women) and also the commitment to achieve the UN Sustainable Development Goal 5, Gender Equality as a whole.

Not only that, there have been cases of illegal migration and trafficking of women from Nepal to Gulf countries through countries like India, Bangladesh, Srilanka and so on as the result of the ban which had led to several other challenges. Rather than protecting women, such type of ban is found to be simply forcing the women to choose riskier channels to travel to their destination countries for work.

Women travelling through illegal routes remain undocumented, because of which they do not gain the legal status in the foreign land and are not protected by any law which makes them more vulnerable from future negative consequences that they might have to face in that country. According to a report published in 2018, almost 80% of the total Nepalese women working abroad are domestic workers and among these as well 80% of them are living there with no proper documents whatsoever.

In many of the gulf countries, the domestic work sector is particularly not protected by any labour laws which makes it more vulnerable for women and keeps them in riskier position throughout their stay in the foreign land. Making the situation even worse, domestic workers are kept by the employers under the sponsorship system known as "Kafala" in which working situation of the employee is tied up entirely on the employer. This puts full restriction on the employee and affects their right to freedom and mobility throughout the working period. In addition to this, employer is able to have complete retention of the employee's passport hence making it difficult for the employee to travel and seek employment in another workplace if they are mistreated and issues of non-payment of the salary occurs.

Looking into all these factors, it can be concluded that instead of bringing up positive change, the ban enforced by the government has proved to be counter-productive and ineffective in nature. Rather than simply putting a ban for women to travel abroad as domestic workers, government should look into other factors and ways in which the condition of the women can be improved.

The Government of Nepal has not yet ratified the ILO Convention 143 on Migrant Workers neither the ILO Convention 189 on Domestic Workers. With this, it is quite clear that government is not ready to take responsibility to the issues regarding the migrant workers and the challenges associated with it in the long run. Various civil society organizations have been working tremendously in lobbying the government to ratify the above-mentioned conventions. If Nepal ratifies these conventions, it will serve in improving the legal status of women working as the domestic workers abroad and also bringing improvements in the working condition of the overall migrant women workers.

Women migrant workers have a huge contribution in bringing remittance and improve the economy of the country hence banning is not a reasonable decision, neither it is an ultimate solution to end problems faced by women working abroad, especially in the gulf countries as domestic workers. Rather than prohibiting women from their human rights through ban, government should work on ratifying the international convention on the protection of women migrant workers, especially the domestic workers. Government should initiate bilateral agreements with all those countries where Nepalese women migrate as domestic workers.This helps to ensure fair recruitment, access to justice and effective monitoring mechanism for the protection and safety of the migrant women workers abroad. Furthermore, government should also search possibilities and create employment opportunities for women in countries other than the gulf nations such as Thailand, Singapore, Hong Kong etc. where proper rule of law is implemented with regards to migrant workers.