Despite facing criticism against a number of his decisions, Modi has remained indifferent to the voice of protests. 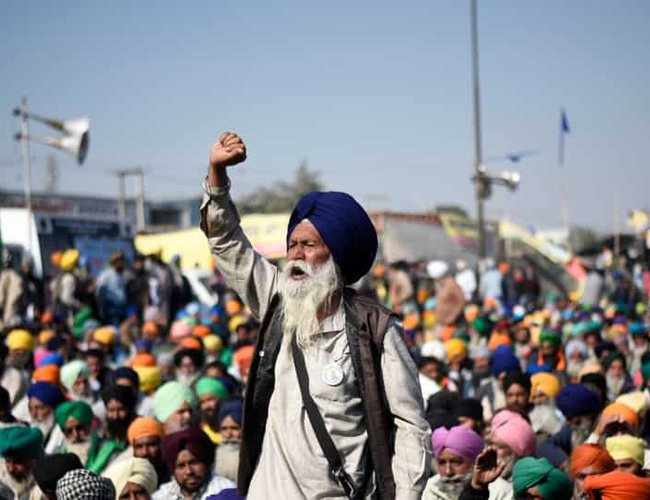 As with every year, heavy fog started descending the Indian capital last month as winter set in. But the fog was not the only thing to descend. The chilly Indian capital also saw swathes of angry turban clad farmers from neighboring Punjab and Haryana swarming the capital to vent their frustration at the incumbent Modi government.

The farmers from Haryana and Punjab are protesting against three of the government’s laws passed in September which supports the market and Multi-National Corporations (MNCs) but puts them in jeopardy. Taken together, the laws will loosen the rules around sale, pricing and storage of farmers’ produce that have protected them for decades. While the government claims that the move is necessary to modernize the agriculture sector, the farmers are not buying the argument. They allege that the move will simply strengthen the position of private businesses who will step on the law to exploit them by driving down crop prices in the long term.

But despite almost two months of protest from one of his biggest vote blocs and two rounds of talks, the Modi government has not budged much. This has been a standard approach that the government has used to tackle dissenting voices. The Indian PM is not new to protests. Ever since his re-election last year, the right-wing leader has seen a number of demonstrations – be it against his decision to revoke the constitutional autonomy of Kashmir or against the contentious Citizenship Amendment Act (CAA), which experts claim was overtly biased against Muslims. His decision to impose lockdown in the face of COVID-19 pandemic giving people just four hours to travel back home also invited harsh condemnation. Similar was the response to his demonetization movein his first term.

In all these instances, Modi and his government have remained utterly indifferent to the voice of the protests. When the PM was denounced for his decision on Kashmir, not only did he stick to it but he went further and retorted to authoritarian moves such as putting opposition leaders under house arrest and cutting of internet in the state for almost a year. During the protest against CAA, many of his government ministers were busy discrediting the protesters terming them ‘anti-nationals’ and ‘Pakistan-sponsored’.When thousands of poor laborers started walking back home in the absence of transportation facilities during the lockdown, the government simply brushed off the issue. There was no show of empathy or support from the government for the laborers,many of whom made the travel battling hunger, cold and even death.

While in any democratic system, such repeated criticism would have mounted huge pressure on the government and forced it to tread carefully, this has not been the case with Modi government. Thanks to his party’s majority in the parliament and his ‘nationalist appeals’, his staple approach has, unfortunately, worked. What this has done is severely undermine the democratic process in the world’s largest democracy. Take for instance the very farm laws that the farmers are protesting against. The three laws were hastily passed in the midst of the pandemic, without following due process in the parliament and most importantly, without consultations with the farmers’ associations or their leaders. The process bore striking resemblance to what happened when the law on Kashmir was being passed. More worryingly, the authoritarian rhetoric shown by the PM has injected a sense of superiority amongst his cadres who have been brazenly practicing violence as was evidenced earlier this year in the Delhi riots.

But little will change with the current guard in place.Thanks to the support the PM enjoys amongst the middle class, his populist rhetoric and an overtly biased media,the government’s actions will continue to go unchecked.The absence of strong opposition has also lent a hand. Noted historian Ramachandra Guha recently wrote in one of his columns that the only way to dislodge the authoritarian Modi-Shah regime electorally would be for Congress to get rid of Gandhis and bring capable faces in leadership. Until then, one can expect to see democracy further eroding in the country.