Mayhem In US Congress Darkest Day

Mayhem In US Congress Darkest Day 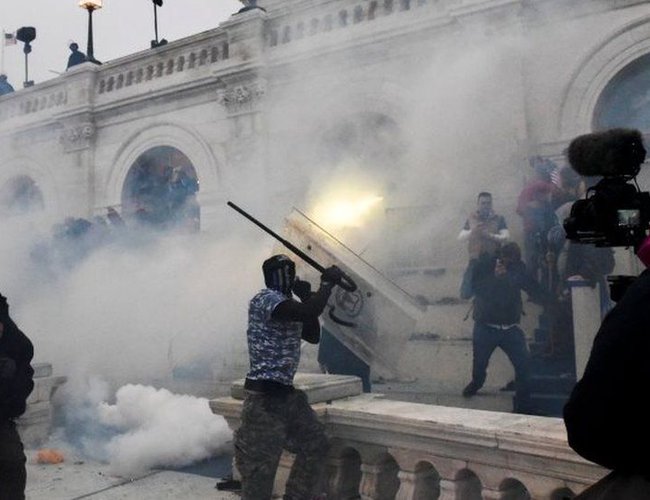 For a majority of Nepalis, the United States is a guardian of democracy. They get the first-hand definition of democracy from Abraham Lincoln -- by the people, of the people and for the people. The mayhem carried out by the supporter of a sitting President on January 6 shocked the people of Nepal.

“Today is the darkest day in the history of democracy. That is not only in America but around the world,” said Eminent Constitutional lawyer Badri Bahadur Karki. “I cannot believe that this kind of situation happens in the US.”

Political leaders of Nepal, who have been facing a new turmoil following the dissolution of the House of Representatives, also expressed their shock. “It is natural for us to see mob ruling. It is unimaginable for us to see an attack against democracy in the United States,” said NC leader Prakash Man Singh.

As the land of Abraham Lincoln, George Washington, Benjamin Franklin and Thomas Jefferson, America has greatly contributed to the rights of the people and constitutionalism.

However, Alexis de Tocqueville saw this kind of greatest danger a century ago. Majoritarian systems are a major threat to democracy. What Alexis de Tocqueville in his book “Democracy in America”, expresses is that it’s the very strength of democratic institutions Americans are able to retain democracy and it is the same institution that will likely bring anarchy and disorder. Today’s mayhem showed how a sitting president can destroy the value of democracy and weaken the process.

After a dramatic day of violence at the US Capitol, the US House of Representatives and Senate certified Joe Biden's election as US president and Kamala Harris as vice president.

Pence, as the session came to an end, said the count "shall be deemed a sufficient declaration" of Biden’s victory, but offered no words of congratulations to the incoming administration.

It capped an extraordinary day of chaos, violence and division. Proceedings had been disrupted earlier by a mob of outgoing President Donald Trump's supporters who stormed the US Capitol.

Vice President Mike Pence formally presides over the session counting the electoral votes. He rejected Trump's claim he had the power to reject electors that have been "fraudulently" chosen.

"To those who wreaked havoc in our Capitol today — you did not win," he said after reopening the disrupted session in the Senate.

Supporters of President Donald Trump have stormed the US Capitol in the most violent rejection of Trump's election loss yet. Critics say the president is to blame for the unprecedented disregard for democracy.

Armed protesters storming a parliament building over the sounds of mayhem in the streets — not a scene you're used to seeing in the United States. But after weeks of US President Donald Trump not accepting his election loss and telling his supporters to not let Democrats steal the election from them, that's exactly what was happening around the Capitol in Washington DC.

Although the institution prevails over the individual whim, what it has damaged is democracy all over the world. It will likely take decades to cover the damage made by the mayhem.

As Winston Churchill said democracy is the worst form of government except for all those other forms that have been tried from time to time. As the rule of the people, we have no alternative other than to follow it. However, mayhem in US has taught us a great lesson not for Americans for the countries around the world.

Russian Forces Claims Mariupol Steel Plant is Under Their Control By Agencies 1 day, 17 hours ago

COVID-19 Kills Over One Million In US By Agencies 4 days, 17 hours ago

Ukrainians Forces Continues Their Fighting Against Russians By Agencies 4 days, 17 hours ago